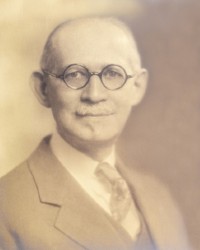 Dr. Julius Friedenwald came from a family which, for more than 80 years in Baltimore, was associated with the best in medicine. He attended the College of Physicians and Surgeons, which later merged with Maryland, graduating in 1890. He studied medicine and gastroenterology in Berlin, Paris, Vienna and London before returning to Baltimore to establish what became a very large medical practice.

His devotion to patients did not prevent him from authoring or co-authoring several books and more than 200 journal articles. From 1909 to 1935, he was Professor of Gastroenterology at the University of Maryland and a member of the school’s medical council. As such, he was heavily invested in student education and advancement. He was a champion of equality on medical education. He was described by all who knew him as kind, affable, optimistic and generous, able to maintain his gentleness of disposition and character throughout his long career. He held office in numerous regional and national medical societies.

Each year the Julius Friedenwald medal is awarded by the American Gastroenterological Association for distinguished service in that branch of medicine. It is the highest honor bestowed by that association.

Phil Dittmar, MD
Assistant Professor of Medicine and Assistant Dean for the Office of Medical Education