Dr. Civin is a renowned leader and innovator in laboratory research on blood and immune system development, leukemia, stem cell transplantation, and gene therapy. Dr. Civin joined the University of Maryland School of Medicine in January 2009 as the founding Director of the Center for Stem Cell Biology and Regenerative Medicine, and Associate Dean for Research in the School of Medicine.

Dr. Civin was recognized as the National Inventor of the Year in 1999, and received the prestigious Karl Landsteiner Memorial Award and Lectureship* in 2009, both for his pioneering breakthrough discovery of the CD34 antibody, which has had a major impact on the field of blood research. Dr. Civin also co-discovered human FLT3 receptor, a myeloid growth factor receptor that is frequently mutated in leukemias.

With the discovery of the CD34+ and the FLT3 receptor, Dr. Civin accomplished the rare feat of making two field-opening laboratory discoveries that he and his colleagues then brought to their own patients as novel therapeutics. In this process, Dr. Civin has mentored (trained and inspired) a large number of talented trainees to pursue academic careers in translational research.

Dr. Civin is currently a principal or collaborating investigator on 13 peer reviewed research projects totaling nearly $5M (and over $20M, including awards that he still participates in, but are centered at Johns Hopkins). His lab is funded by the National Institutes of Health, the State of Maryland Stem Cell Research Fund, the Leukemia & Lymphoma Society and other private foundations.

His collaborative research includes both basic science and translational/clinical research projects with entities including the Johns Hopkins University, the Howard Hughes Medical Institute, the University of Maryland Center for Vascular & Inflammatory Diseases and the University of Maryland Greenebaum Cancer Center. He is an inventor of nine biomedical patents that have emanated from his research, which now focuses mainly on normal and malignant stem cells.

Dr. Civin has lectured around the world, published more than 250 articles and book chapters, received many awards, and served in leadership positions of multiple distinguished committees and editorial boards, such as Editor-in-Chief of Stem Cells from 2000-2007.

* The Landsteiner Award was initiated by the American Association of Blood Banks in 1955 to honor Karl Landsteiner MD, whose Nobel Prize-winning discoveries of the ABO and Rh blood group antigens laid the foundation for modern blood transfusion therapy. It recognizes a scientist whose original research resulted in an important contribution to the body of scientific knowledge and who has an international reputation in blood transfusion medicine or a related field.

On June 12, 2013, Dr. Civin was inducted into the Baltimore Jewish Hall of Fame 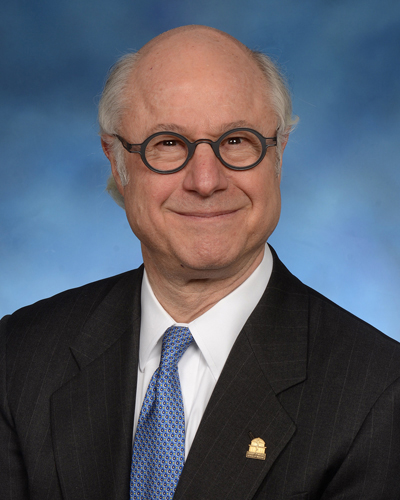 The goals of Project 4 are to:

Dr. Civin and his lab receive funding for Project 4 via a subcontract from JHU to UMB.

The major goals of this project are to provide postdoctoral lab research training for MDs and PhDs on topics highly related to childhood cancer and blood diseases (10 slots/yr). C. Civin receives no salary support.

To support general laboratory infrastructure and specific research that is not specifically funded by any other source.

To elucidate the effects of selected hematopoietic stem-progenitor cell (HSPC)-expressed microRNAs, especially mir-155, on human leukemia stem cells (LSCs) and to determine the molecular mechanisms of these cellulars microRNA effects.

To translationally develop CD22 immunotoxins for B-precursor ALL by (1) preclinically assessing the efficacy of the “HA22” CD22 immunotoxin against the ALL stem cell, and (2) preclinically exploring potential synergies of HA22 with other agents as promising approaches to human Phase II clinical trials ongoing at NCI.

The major goals of this project are to expand novel human embryonic stem cell (hESC)-based hematopoietic models, and now extend these models toward studying the detailed developmental origins of normal and leukemic human HSCs.

NOTE: This is a grant to Johns Hopkins University (JHU). Since Dr. Civin’s move to UMB in Feb. 2009, Dr. Civin receives effort support as a subcontract from JHU to UMB.

The major goal of this project is to develop zinc-finger nucleases as reagents for site-specific modification of mammalian cells including human cells.

In this project, we seek to extensively profile microRNA expression during the early stages of human and mouse erythropoiesis. We will determine if selected erythroid-expressed microRNAs (“E-microRNAs”) functionally affect erythropoiesis. Using erythroid cell lines and primary cells, we will then identify proteins whose synthesis is inhibited by each E-microRNA that affects erythropoiesis. Identifying the molecular mechanisms of the erythropoietic effects of these E-microRNAs may lead to novel means to expand and control erythroid development for research and potential clinical applications.

The Hippo Pathway in Control of Hematopoietic Organ Size and Stemness