Patients with acutely life-threatening health conditions who were treated in the University of Maryland Medical Center's (UMMC) innovative Critical Care Resuscitation Unit (CCRU) received faster treatment and had better health outcomes, including a 36 percent lower risk of dying than those who were transferred from a hospital’s emergency department then evaluated and treated in a traditional intensive care unit, according to a recent study in the Journal of Emergency Medicine conducted by researchers at the University of Maryland School of Medicine (UMSOM).

Critically ill patients who experience a sudden life-threatening condition like a stroke, ruptured aneurysm, or a massive pulmonary embolism (blood clot in the lung) are often first brought to the emergency department of the closest hospital and then transferred to a larger institution if their condition is deemed to be beyond the scope of the hospital’s level of care. The process of evaluating and transferring these patients, however, is generally ad hoc and fragmented, which results in delays of patients getting time-sensitive care that could save their lives or prevent permanent disability.

To improve access to care for critically ill patients, the R Adams Cowley Shock Trauma Center, University of Maryland, in conjunction with the Program in Trauma at UMSOM, established the CCRU in 2013 as the first critical care resuscitation unit in the nation. The recent study demonstrated for the first time that utilization of the CCRU not only helped double the number of transferred patients from other hospitals’ emergency departments, but also led to faster access to critical care resources and definitive surgical treatment, which decreased a patient’s risk of dying from their illness. 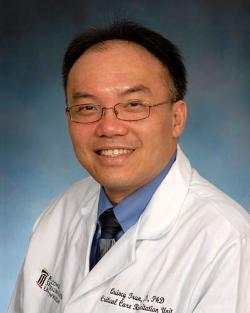 “We have provided an important validation of the CCRU model, showing that it significantly improves patient outcomes,” said Quincy Tran, MD, PhD, Assistant Professor of Emergency Medicine at UMSOM who led the study. “Now that we have the data on the lifesaving potential of the CCRU, we hope to see other hospitals creating similar models.”

The study analyzed medical records from 1565 critically ill patients with 644 treated in the CCRU during the first year of its operation in 2013. The rest served as control groups who were transferred directly from other hospitals’ emergency department to traditional intensive care units at UMMC during the year 2012 before the CCRU opened, and the year 2013 after the CCRU was opened.

The researchers found that the average time to get into an intensive care unit after a transfer request was filed was 108 minutes for CCRU patients, compared to 158 minutes for the control group of patients who were transferred and treated in 2012 before the CCRU opened, and 185 minutes for those in 2013. CCRU patients requiring emergency surgery received that surgery about 3.5 hours on average after they arrived at UMMC compared to 6 to 7 hours after arrival for those in the control group.

After controlling for variations in the severity of disease and care, the researchers found that the CCRU patients were 36 percent more likely to survive than those in the control group, which was a statistically significant finding.

“The CCRU is modeled after the highly-effective Trauma Resuscitation Unit at the R Adams Cowley Shock Trauma Center. It relies on efficient communication and consultation with referring facilities and intra-hospital transport providers in order to facilitate prompt transfer of patients requiring specialized care to the University of Maryland Medical Center,” said co-author Daniel Haase, MD, Assistant Professor of Emergency Medicine at UMSOM, and Medical Director of the CCRU. “Our job is to collaborate with our specialists to deliver immediate resuscitation of patients with time-sensitive emergencies.”

Procedures performed in the CCRU include massive blood transfusions, continuous renal replacement therapy (dialysis) for patients with malfunctioning kidneys, continuous EEG monitoring of the brain, and organ support with a heart-lung machine.

“We are leading the way in critical care medicine by having the first dedicated Critical Care Resuscitation Unit in the nation,” said UMSOM Dean E. Albert Reece, MD, PhD, MBA, University Executive Vice President for Medical Affairs and the John Z. and Akiko K. Bowers Distinguished Professor. “Having the data to demonstrate improved patient outcomes will hopefully convince other hospitals to consider adopting this model of care.”

The University of Maryland Medical Center (UMMC) is comprised of two hospital campuses in Baltimore: the 800-bed flagship institution of the 14-hospital University of Maryland Medical System (UMMS) — and the 200-bed UMMC Midtown Campus, both academic medical centers training physicians and health professionals and pursuing research and innovation to improve health. UMMC’s downtown campus is a national and regional referral center for trauma, cancer care, neurosciences, advanced cardiovascular care, women's and children's health, and has one of the largest solid organ transplant programs in the country. All physicians on staff at the downtown campus are clinical faculty physicians of the University of Maryland School of Medicine. The UMMC Midtown Campus medical staff is predominately faculty physicians specializing in diabetes, chronic diseases, behavioral health, long term acute care and an array of outpatient primary care and specialty services. UMMC Midtown has been a teaching hospital for 140 years and is located one mile away from the downtown campus.  For more information, visit www.umm.edu.