For decades, Laure was an innovative virology researcher and a respected leader in investigating Herpes. She was an early innovator in the use of engineered viruses for gene therapy and cancer treatment with oncolytic viruses.  Laure was also a committed mentor who retired from the Department of Pharmacology in 2018 after spending 35 years at UMSOM. 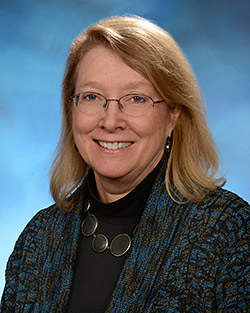 “Dr. Aurelian brought passion and commitment to everything she did, from her science to the countless men and women she mentored over the years and the many lives she changed for the better,” said Margaret McCarthy, PhD, the James and Carolyn Frenkil Dean’s Professor and Chair of the Department of Pharmacology.

During her decades at UMSOM, Dr. Aurelian performed interdisciplinary work in virology, immunology, and cellular and molecular biology, focusing on oncology and neuroscience. She authored 310 publications in high-impact peer-reviewed journals and numerous review articles and book chapters, and is the inventor of 14 U.S. and foreign patents. She has trained over 60 postdoctoral and 37 predoctoral fellows, many of whom hold academic positions.

She has served as an honorary professor in European, Israeli, Japanese, and Chinese universities and has received numerous international awards and honors.

Her contributions to science include the identification and molecular characterization of herpes simplex virus type 2 (HSV-2) and the role that it plays in human disease. Another major contribution has been the elucidation of factors involved in disease development and the demonstration that certain inhibitory cell pathways are involved in the causation of recurrent disease. These efforts culminated in the development of a therapeutic HSV vaccine that is in clinical trials. Towards the end of her research career, Dr.  Aurelian investigated oncolytic virotherapy, an emerging cancer therapeutic approach that was found to have modest clinical efficacy.

Dr. Aurelian received her MS in Microbiology at Tel-Aviv University in 1962 and her PhD in virology from Johns Hopkins in 1966. She joined the faculty at Hopkins in 1967. After becoming a tenured professor in 1983, she left Hopkins and joined the faculty of UMSOM where she remained until her retirement. In 2013, she also accepted the position of senior advisor at Stanford University Medical School.

“Laure Aurelian was a trailblazer and a pioneer who forged an extremely successful research career.  Her vast accomplishments have left an indelible mark on virology that continue to yield promising new treatments for devastating diseases. Our scientific community in general and the UMSOM are indebted to Dr. Aurelian for her many important contributions,” said E. Albert Reece, MD, PhD, MBA, Executive Vice President for Medical Affairs, UM Baltimore, and the John Z. and Akiko K. Bowers Distinguished Professor and Dean, University of Maryland School of Medicine.