In 2008, the University of Maryland School of Medicine expanded its Mini-Med School program to Kids Mini-Med at the Salvation Army’s Franklin Square Boys & Girls Club in West Baltimore. Doctors from the School visited the camp weekly to teach about health and encourage the young campers (ages 5 to 13) to consider careers in science and medicine. The idea took off and over the past decade, our faculty have touched the lives of several hundred campers.

On August 16, 2017, the tenth Kids Mini-Med School ended with a class on campus. The last class was followed by a special ceremony in which each participant was presented with a graduation certificate from E. Albert Reece, MD, PhD, MBA, Vice President for Medical Affairs, University of Maryland, and the John and Akiko K. Bowers Distinguished Professor and Dean of the School of Medicine. As he shook hands with each child, Dean Reece asked what they wanted to be when they grew up. He received a variety of answers, from police officer, to nurse, to surgeon, to mermaid – and even one child who declared he was going to become President of the United States. (He certainly had the personality to back up that claim!)

Before graduation, the students attended the final class. Kathy Neuzil, MD, MPH, Professor of Medicine and Director of the Center for Vaccine Development (CVD), discussed what a vaccine is, why people are vaccinated, who should get vaccinated, and how vaccines work. August is National Immunization Awareness Month and as children across the world prepare for a new school year, vaccinations are on the back-to-school list for many. Dr. Neuzil acknowledged getting a vaccine can be painful, but stressed the temporary pain from a shot is much less than the pain these illnesses can cause. “I am kind of scared of shots,” noted one seven-year old, “but I am glad I got my shots so I don’t get sick.” Another child noted that “if you get vaccinated, it helps others not get sick.”

The group played a game that emphasized how vaccines work. They learned how quickly measles can spread through a community that is not vaccinated and how vaccines can stop the chain of infection. They saw how the number of people infected decreased as the number vaccinated increased. Several keen participants even noticed that some children did not get measles even though they were not vaccinated, a concept known as herd immunity. The lesson culminated with a video where superheroes and villains faced off in the battle to defeat diarrheal diseases. With their superpowers, which included vaccines, these heroes conquered the biggest villains sickening kids with diarrhea – rotavirus, enterotoxigenic Escherichia coli, Shigella, and Cryptosporidium.

Dean Reece told the campers “aim high, stay focused, and stick with your goals” and you too, can be a superhero. 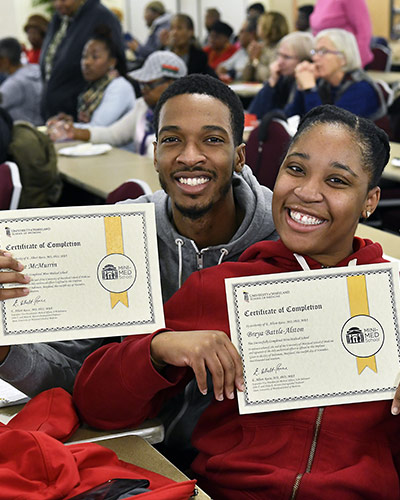 Since 2001, the University of Maryland School of Medicine (UMSOM) has extended free health screenings and medical education to nearly 8,000 Marylanders of all ages, from elementary school students to their grandparents, through its Mini-Medical “Mini-Med” School programs. 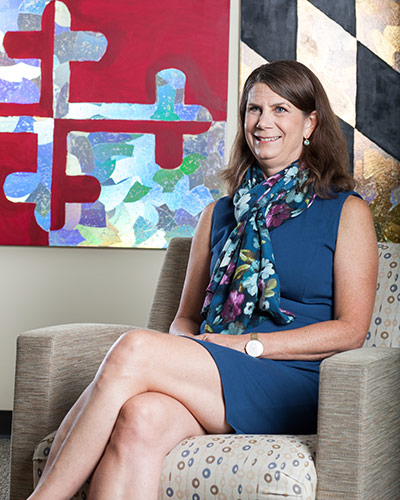 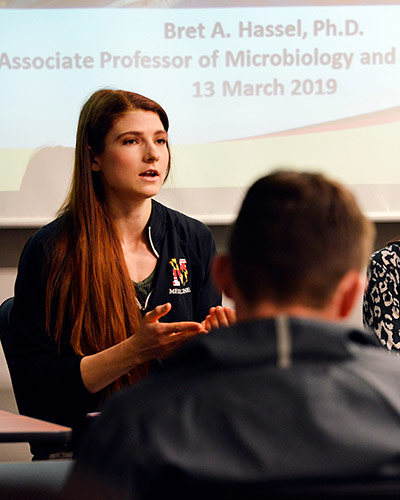 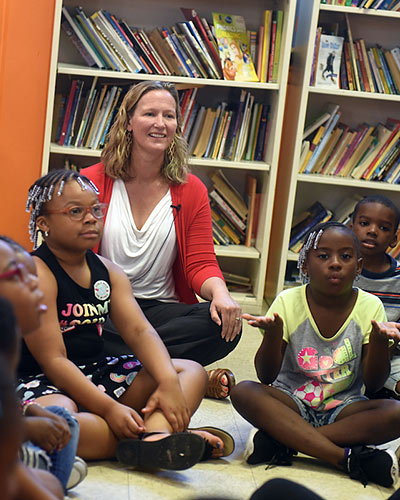 2018 marked the 11th year that the University of Maryland School of Medicine (UMSOM) hosted its annual Mini-Med School for Kids program. 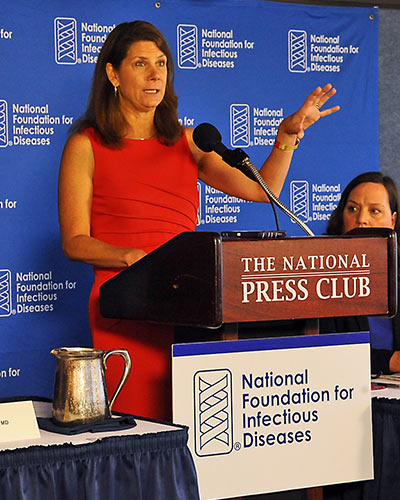 “Protect yourself and others by getting the flu shot” was the message from Kathleen Neuzil, MD, MPH, FIDSA, Director of the Center for Vaccine Development (CVD) at the University of Maryland School of Medicine (UM SOM). Dr. Neuzil was among the speakers at a press conference hosted by the National Foundation for Infectious Diseases. U.S. Secretary of Health and Human Services, Thomas E Price, MD, also spoke at the press conference and urged people to get their flu shot. The panel members all received their flu shots following the press conference.

Kathleen M. Neuzil, MD, MPH, FIDSA, Professor of Medicine and Director of the Center for Vaccine Development (CVD) at the University of Maryland School of Medicine (UM SOM), was elected to serve a three-year term to the Board of Directors for the National Foundation for Infectious Diseases (NFID).