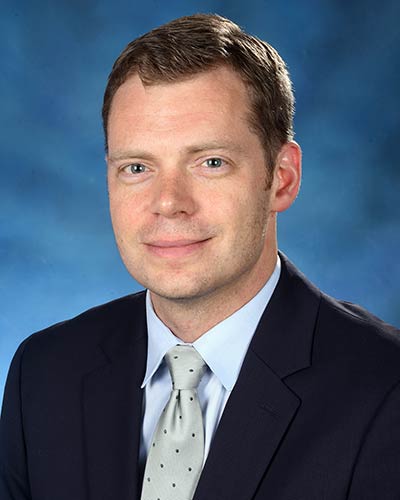 Nearly four years ago, federal health officials reported on a frightening new epidemic linked to e-cigarette use that caused a life-threatening and potentially irreversible lung condition. The condition – called e-cigarette or vaping product use-associated lung injury (EVALI) – was primarily linked to the inclusion of vitamin E acetate (VEA) in e-liquids used in vape cartridges. It was mainly found in marijuana vape products that were unregulated.

Jason Rose, MD, MBA, Associate Professor of Medicine and Associate Dean of Innovation and Physician Science Development at the University of Maryland School of Medicine (UMSOM), co-led a workshop through the American Thoracic Society that brought together public health experts from across the country to discuss the investigation findings and research on EVALI and to draft recommendations to help prevent future epidemics. Their analysis was published in a new report in the January 2023 issue of the Annals of the American Thoracic Society.

“We’re trying to raise awareness of this as a growing public health concern,” said Dr. Rose. “We’ve identified and managed the VEA problem, but there are likely going to be new substances and contaminants present in e-liquid formulations that can induce lung injuries in the future.”

There has been an increase in e-cigarette use over the years as some adults use these nicotine products to help them quit smoking. What has been alarming, however, is the rise in vaping among teens and young adults who are using these products for recreational purposes. In a federally funded 2019 survey, 22 percent of college students said they vaped nicotine in the past month, more than double the percentage of those who reported vaping in a 2017 survey. The percentage of college students who said they vaped marijuana in the past 30 days rose from 5 percent in 2017 to 14 percent in 2019, according to the National Institute on Drug Abuse. Similar rates and a similar rate increase were also seen in young adults who were not attending college. 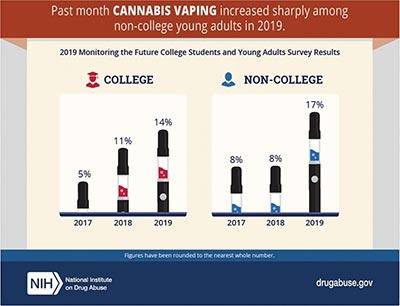 The 2019 EVALI epidemic caused 2,807 hospitalizations and 68 deaths in the U.S. before VEA was identified and removed from e-cigarette products, according to the new analysis. Symptoms of EVALI mimicked an acute respiratory illness with symptoms such as cough, shortness of breath, chest pain, and, in some cases, coughing up blood. Gastrointestinal symptoms, fever, fatigue, or rapid weight loss were also associated with EVALI.

“At its core, EVALI is a serious disease that primarily affects the lungs and results in a substantial number of hospitalizations and deaths in a relatively young and otherwise healthy population across the United States,” said study co-leader Meghan Rebuli, PhD, assistant professor in the Department of Pediatrics in the UNC School of Medicine. “This epidemic is largely caused by the unregulated and quickly evolving nature of the e-cigarette industry and certainly highlights the need for continued action by both researchers and government agencies.” 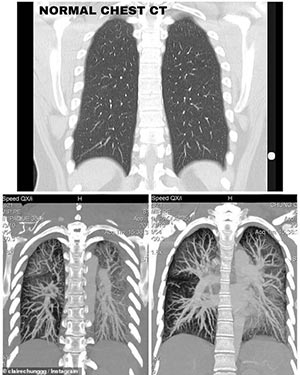 Early in the epidemic, the Centers for Disease Control and Prevention (CDC) took e-cigarette samples to identify what EVALI patients were breathing into their respiratory systems. Tetrahydrocannabinol (THC) – the psychoactive ingredient in marijuana – and vitamin E acetate were found in the majority of samples; this led the CDC to conclude that vitamin E acetate was likely responsible for causing EVALI.  Vitamin E acetate, however, wasn’t found in all the vaping products linked to EVALI cases, which raises the question of whether other components also may have led to the lung condition, according to Dr. Rose.

The workshop panel issued several public health recommendations to prevent such outbreaks in the future. First and foremost, the panel underscored the need for scientists to understand the mechanisms of EVALI more fully. More study is needed, for example, to assess the role played by various compounds in vaping products on the development of lung disease. This step would require more research and testing of e-liquid formulations to determine their toxicity (based on dose and delivery through inhalation) with the goal of categorizing the ingredients to create safety standards. The workshop panel advised less restrictive regulations on the study of marijuana – currently considered a controlled substance by the federal government –to allow for more robust studies of THC in vaping products.

“Healthcare providers need to be better educated on the signs and symptoms of EVALI to quickly recognize the condition and identify new outbreaks,” said UMSOM Dean Mark T. Gladwin, MD, Vice President for Medical Affairs, University of Maryland, Baltimore, and the John Z. and Akiko K. Bowers Distinguished Professor. “Just as important, though, is the need to inform consumers through public health messaging of the potential dangers of vaping products that are largely unregulated and have unknown health risks.”

University of Maryland School of Medicine (UMSOM) Dean Mark T. Gladwin, MD announced today that Jason Rose, MD, MBA, has been named Associate Dean for Innovation and Physician Science Development at UMSOM. He will also serve as the Director of Faculty Entrepreneurship. The new positions are part of Dean Gladwin’s goal of strengthening the school’s physician-scientist pipeline and advancing a major effort to foster biomedical start-up companies that are based in academia.