An internationally renowned integrative physiologist, Dr. O’Donnell will lead the research mission and serve as advisor to the Dean in matters of research strategy and operations. His responsibilities will include oversight of the School’s broad research functions, including the UMSOM’s Offices of Research Affairs, Research Development and Operations, and Compliance/Conflict of Interest. Dr. O’Donnell will further the School’s strong position in biomedical research and discovery among the top echelon of medical schools. Over the past two decades, UMSOM has seen historic growth in its research funding portfolio – with total funding increasing from $323 million in 2006 to approaching $600 million in 2020. 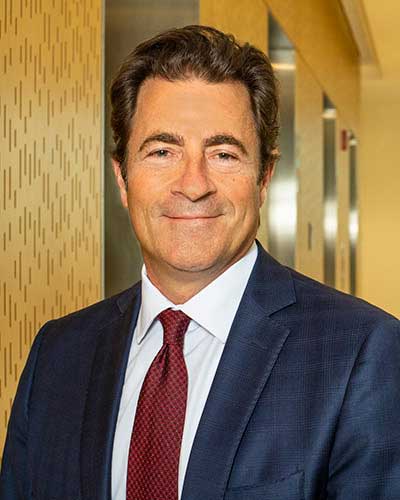 “Chris O’Donnell has a scientific creativity and strategic understanding of the nuances necessary for success in academic medicine that he used at Pitt to build an incredible funding record, both personally and at the institution level,” said Dean Gladwin. “He recognizes the importance and complexity of training physician-scientists and increasing the number of T32-funded programs that offer a rigorous academic pathway for junior investigators.”

“This is a tremendous opportunity to use my experience and build on the University of Maryland School of Medicine’s significant biomedical progress in recent years,” said Dr. O’Donnell. “I’m excited to help Dean Gladwin achieve his vision and to further advance the institution’s national and international prominence.”

In the area of operations, Dr. O’Donnell will partner with the Office of Business Affairs within the Dean’s Office to plan for how research space is assigned, and suggest strategies for the most efficient use of that space. This work will include overseeing the scientific resources of the Center for Innovative Biomedical Resources (CIBR), in collaboration with a CIBR Advisory Committee. He will further work with the Business Affairs office to review current financial investments and institute long-term planning for those investments.  He also will serve as a liaison with the Veteran’s Administration Medical Center (Baltimore) leadership in regard to jointly funding faculty, space, and research collaborations.

Dr. O’Donnell joined the faculty of the University of Pittsburgh School of Medicine’s Department of Medicine’s Division of Pulmonary, Allergy, and Critical Care Medicine in 2004, and became an active leader, researcher, and administrator. As Executive Vice Chair for Academic Affairs in the Department, he managed a faculty of almost 800, established a T32 funding stream in all 10 divisions and two institutes, had oversight for a range of programs that encompass strategic planning, recruitment, space management, budget analytics, and funding and career development initiatives.

As a scientific investigator, Dr. O’Donnell studies the destructive effects of sleep apnea on the body, specifically what happens when oxygen levels are too low and how this impacts metabolism and functioning of the heart and lungs. Dr. O’Donnell began his career in academic medicine at Johns Hopkins University School of Medicine before joining Pitt’s faculty. Since 1996, he has been a principal investigator continuously funded by the National Institutes of Health and has published more than 100 original, peer-reviewed data papers. He has held leadership roles with an NIH study section and associate editorial roles with the journals Obesity and the Journal of Applied Physiology.

In addition to his research, Dr. O’Donnell was appointed the chief operating officer for the Pitt COVID-19 Medical Response Office, helping to shepherd his institution through the uncharted waters of the pandemic.