Using laboratory-grown roundworms, as well as human and mouse eye tissue, University of Maryland School of Medicine (UMSOM) researchers have identified a new potential mechanism for age-related macular degeneration—the leading cause of blindness among older adults. The UMSOM researchers say that the findings suggest a new and distinct cause that is different from the previous model of a problematic immune system, showing that the structural organization of the eye’s light-detecting cells may be affected by the disease.

The discovery offers the potential to identify new molecular targets to treat the disease. Their discovery was published on April 12 in the Proceedings of the National Academy of Sciences (PNAS).

According to the National Eye Institute, more than 14 percent of Americans over the age of 80 have age-related macular degeneration—a condition that leads to the progressive loss of vision with no known cure. Treatment exists for the “wet” version of the disease affecting only 10 percent of those with the condition, meaning most have no options.

“In order to find a cure for a disease, you have to fully understand what causes it, and we identified potential new contributors that were not known before,” says Bruce Vogel, PhD, Assistant Professor of Physiology and Scientist at the UMSOM’s Center for Biomedical Engineering and Technology (BioMET).

Several years ago, researchers had identified genetic mutations in the protein complement factor H as a contributor in large number of macular degeneration cases. Complement factor H marks cells in the body as self and protects them from attack by the immune system, whose job it is to eliminate invading pathogens and cells that do not belong. As a result, due to complement factor H’s role in this process, it was thought that macular degeneration was likely due to the immune system attacking its own body’s cells that were not marked properly as “self.”

According to Dr. Vogel, since identifying effective new therapies for the disease has been slow, he wanted to see if his team could find new insights from studying the disease components in his laboratory model of the roundworm, C. elegans.

Dr. Vogel’s team found a worm version of complement factor H protein located in the sensory neurons that help the worms detect chemicals, food, touch, and temperature. The protein appeared specifically in the middle region of the sensory neuron’s little antennas, known as cilia (that do the work of sensing the environment), just next to another known important antenna protein called inversin. However, in worms bred to lack complement factor H, they found the inversin spread throughout the antennas rather than remaining in the middle of the antennas.

Next, the researchers confirmed their results in the light-detecting cells in tissue from human retinas. Complement factor H and inversin had the same positioning next to each other in the antenna of light-detecting cells from healthy samples. Yet in people with complement factor H mutations (i.e. people genetically predisposed to macular degeneration), they found the inversin spread around, no longer restricted to its neat banding pattern on the antenna.

“Our findings suggest that complement factor H plays a role in maintaining the organization of photoreceptor cilia, and this process may be defective in age-related macular degeneration,” says Vogel. “We plan to continue this work to determine how this structural disruption affects vision and to determine whether we can reverse the disruption and restore photoreceptor function.”

“Age-related blindness is a vastly untreated condition that will only become more common as our population continues to age,” says E. Albert Reece, MD, PhD, MBA, Executive Vice President for Medical Affairs, University of Maryland Baltimore, and the John Z. and Akiko K. Bowers Distinguished Professor and Dean, University of Maryland School of Medicine. “Studies like these are key to laying the groundwork needed to eventually develop treatments in order to treat blindness, keep older adults living independently, and maintain their quality of life.”

The research was supported by a grant from the National Eye Institute (R21-EY030188).

The researchers do not report any financial conflicts related to this work. 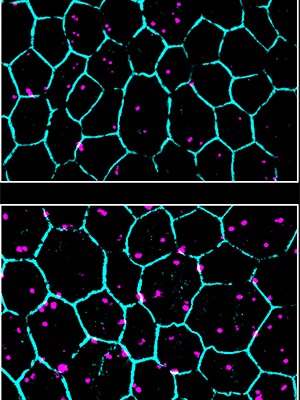 Recycling of the Eye’s Light Sensors Is Faulty in Progressive Blindness of Older Adults, University of Maryland School of Medicine Researchers Show

With the National Eye Institute reporting that about 11 million older adults in the U.S. endure a condition that leads to progressive blindness, known as age-related macular degeneration, University of Maryland School of Medicine (UMSOM) researchers are starting to understand what goes wrong in the disease, in order to develop new therapies to treat it.