Recycling of the Eye’s Light Sensors Is Faulty in Progressive Blindness of Older Adults, University of Maryland School of Medicine Researchers Show

Components behind age-related macular degeneration also important in other diseases, suggesting similarly designed therapies as potential treatments for a range of conditions. 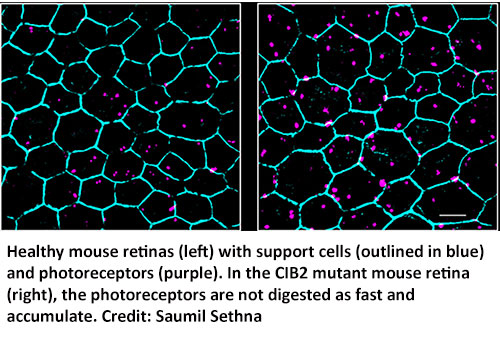 With the National Eye Institute reporting that about 11 million older adults in the U.S. endure a condition that leads to progressive blindness, known as age-related macular degeneration, University of Maryland School of Medicine (UMSOM) researchers are starting to understand what goes wrong in the disease, in order to develop new therapies to treat it.

Using human tissue and mice in their new study, published on June 23 in Nature Communications, they showed that the process which removes the eye’s old, damaged light sensors is disrupted in macular degeneration.

Although more than 50 genes have been linked to the condition, the precise mechanism behind it is unknown. Most people have a form of the condition, for which there are no known effective treatments.

Previously, the senior author of a new study, Zubair M. Ahmed, PhD, Professor of Otorhinolaryngology-Head & Neck Surgery and Ophthalmology at the University of Maryland School of Medicine, found out that many families with hearing disorders had genetic mutations in the gene for the CIB2 protein. In work published in 2012 in Nature Genetics, Dr. Ahmed also showed that CIB2 was needed for vision in a large human family, as well as in zebrafish. Now, in this latest study, his team built on that previous work to dissect the intricate cell mechanisms behind retinal degeneration. 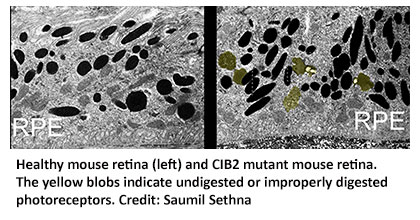 “Photoreceptors continue growing in tiny columns in the eye, but over time, light damages the photoreceptors. To combat this, support cells in the eye slowly munch on the old, damaged photoreceptors, keeping the columns the correct length,” said first author Saumil Sethna, PhD, Instructor of Otorhinolaryngology-Head & Neck Surgery at the University of Maryland School of Medicine. “If the photoreceptors are not removed, or if the process is backed up due to slow digestion by the support cells, like in the CIB2 mutant mice, the undigested material builds up over time, which may contribute to blindness.”

Next, the researchers identified several components in this photoreceptor recycling process, including a group of proteins collectively called mTORC1, which is involved in many human diseases, including cancer, obesity, and epilepsy. 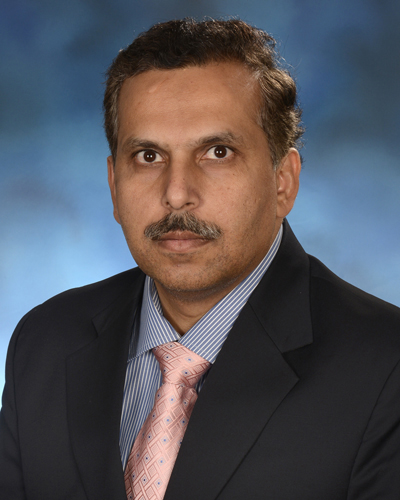 As mTORC1 plays a central decision-maker role for many cellular functions including cleaning up cellular debris, the researchers looked at mTORC1’s activity in the CIB2 mutant mice and saw that mTORC1 was overactive. They confirmed that mTORC1 was also overactive in human eye tissue samples from people with a form of age-related macular degeneration. By linking the results of the mouse studies to human disease, the researchers say their findings indicate that drugs against mTORC1 may be effective treatments for the most common type of age-related macular degeneration. mTOR, the core component can be found in two flavors, each with different functions known as complex 1 (as in mTORC1) or complex 2 (mTORC2). 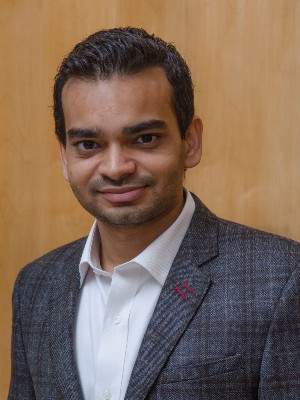 “Researchers have tested many small molecules directed at mTORC1 to treat various diseases, but the problem is that mTOR is needed for so many other cell functions that there are major side-effects when you tinker with it,” said Dr. Ahmed. “In our study, we found a backdoor way to regulate mTORC1 (and not mTORC2), which may bypass many of the unpleasant side-effects that normally occur with suppressing mTORC1. We think we may be able to use our new knowledge of this mechanism to develop treatments for age-related macular degeneration and other diseases as well.”

“Figuring out the cell mechanism behind age-related macular degeneration is the first step to being able to develop new treatments,” said E. Albert Reece, MD, PhD, MBA, Executive Vice President for Medical Affairs, UM Baltimore, and the John Z. and Akiko K. Bowers Distinguished Professor and Dean, University of Maryland School of Medicine. “Using the evolving understanding of the mechanistic role of mTORC1, this study has provided great insights into new ways that researchers can begin to find ways to preserve, to treat, and/or improve macular degeneration, and thus improve the quality of life and independent living in many older adults.”

This work was supported by National Institute on Deafness and Other Communication Disorders grants (R01DC012564, R01DC016295, and R56DC011803), the Loris Rich Postdoctoral fellowship from the International Retinal Research Foundation, and Research to Prevent Blindness Award. 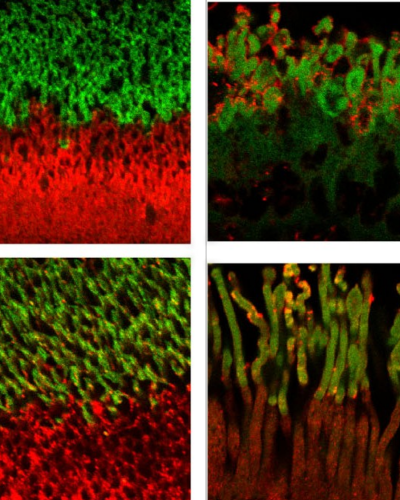 Using laboratory-grown roundworms, as well as human and mouse eye tissue, University of Maryland School of Medicine (UMSOM) researchers have identified a new potential mechanism for age-related macular degeneration—the leading cause of blindness among older adults. The UMSOM researchers say that the findings suggest a new and distinct cause that is different from the previous model of a problematic immune system, showing that the structural organization of the eye’s light-detecting cells may be affected by the disease. The discovery offers the potential to identify new molecular targets to treat the disease.