What Does the Future Hold for Gene Editing Technologies?

While the innovative technology holds enormous potential for treating and curing diseases caused by genetic mutations, it is also fraught with controversy as scientists and medical experts debate the full ethical implications of editing the genomes of human embryos to permanently alter the human species.

“We are bringing together government officials, medical ethicists, legal scholars, and researchers to outline the important issues and determine the best pathway to take as we anticipate this new technology being made available to a growing array of patients,” said Curt Civin, MD, Professor of Pediatrics and Physiology and Director of the Center for Stem Cell Biology & Regenerative Medicine at UMSOM who will serve as a moderator for the panel discussion.

Using CRISPR to alter an embryo would affect the genetic basis of future generations. That possibility, coupled with claims in 2018 by a Chinese scientist that he altered embryos to create the first genome-edited babies, have renewed already heated debates about embryonic research, the moral and legal status of the embryo, and the role of government regulations.

What ethical issues does CRISPR raise? Do existing policies and regulations adequately address those concerns? Are the scientific, medical, and research communities taking steps to ensure that people of different racial and ethnic identities are represented in CRISPR research and will have access to new treatments? How should medical students prepare for these new innovations?

These and other questions will be addressed by these presentations and panel discussions. In addition to the two medical school deans, other panelists include:

“Leaders in medicine -- especially those of us responsible for teaching the next generation of physicians and scientists -- need to continuously look ahead and anticipate which innovations will soon be heading into our clinical practice and what that means for patients,” said Dean Reece, who is also the John Z. and Akiko K. Bowers Distinguished Professor and Executive Vice President for Medical Affairs at University of Maryland Baltimore. “CRISPR is coming and with its arrival is the need to develop strong guidelines on its implementation, not only for the scientific community, but for the public as a whole.” 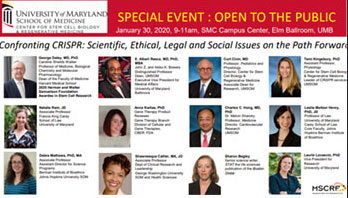 As part of his visit to UMSOM, Dean Daley will accept the Inaugural Herman & Walter Samuelson Award for Stem Cell Research. He will deliver a lecture on his research at an event to be held on the medical school campus in Baltimore on Wednesday, January 29. To learn more, please visit: