$2.3 million Award Targeted for “High-Risk, High Reward” Research that aims to Develop New Tools to Investigate the Wiring of Brain Circuits and how Miswiring Gives Rise to Mental Illness

Alexandros Poulopoulos, PhD, Assistant Professor in the Department of Pharmacology at the University of Maryland School of Medicine (UMSOM), has received the National Institutes of Health (NIH) Director’s New Innovator Award. The award provides $2.3 million to support an “exceptionally creative early career investigator” as part of The High-Risk, High-Reward Research Program of the NIH Common Fund. The award is reserved for scientists at the beginning of their independent research careers, before receiving other research program funding from the NIH.

“Our research aims to understand how neural circuits form in the brain, and to identify the circuitry and mechanisms that underlie conditions such as epilepsy, autism, and schizophrenia,” said Dr. Poulopoulos.

He plans to apply the NIH award funds towards an unconventional approach to address the question of how neural circuits develop in the brain using a new set of innovative in vivo molecular approaches that he and his colleagues recently developed and published in the journal Nature. 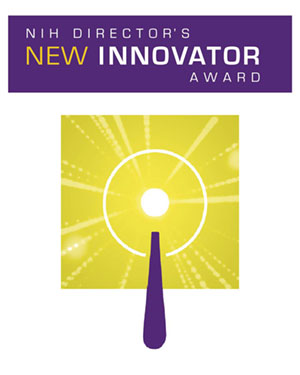 These approaches will directly target and manipulate circuits in the brain of developing embryos using in utero CRISPR genome engineering to investigate the outcomes when certain molecules are inactivated and how that alters the wiring of brain circuitry. The aim of the study is to identify new molecules guiding brain circuit wiring, and the miswired connections that give rise to certain psychiatric and neurological conditions.

Dr. Poulopoulos’s Laboratory focuses on in vivo genome engineering and the pathologies of brain wiring. His team of post-doctoral, PhD student, and post-baccalaureate investigators develop new genome engineering tools and use them to investigate neural circuit wiring in conditions like epilepsy, autism, and schizophrenia. Ultimately, the laboratory is working to develop the knowledge and methodologies that may allow genome engineering to be used for therapeutic intervention to ameliorate wiring pathologies caused by disease or trauma.

“I am so proud that the NIH recognized the innovative talents of our young faculty,” said E. Albert Reece, MD, PhD, MBA, Executive Vice President for Medical Affairs, UM Baltimore, the John Z. and Akiko K. bowers distinguished Professor and Dean, University of Maryland School of Medicine “It sends a strong signal to all of our up-and-coming scientists that the federal government values their work and is willing to invest in important basic research. I am excited to see what new insights we learn from this high-impact work.”

The NIH’s High-Risk, High-Reward Research program catalyzes scientific discovery by supporting highly innovative research proposals that, due to their inherent risk, may struggle in the traditional peer review process despite their transformative potential. Program applicants are encouraged to think outside-the-box and to pursue trailblazing ideas in any area of research relevant to the NIH mission.

“Each year, I look forward to seeing the creative approaches these researchers take to solve tough problems in biomedical and behavioral research,” said NIH Director Francis S. Collins, M.D., Ph.D. “I am confident the 2019 cohort of awardees has the potential to advance our mission of enhancing health through their groundbreaking studies.”

Now in its third century, the University of Maryland School of Medicine was chartered in 1807 as the first public medical school in the United States. It continues today as one of the fastest growing, top-tier biomedical research enterprises in the world, with 43 academic departments, centers, institutes, and programs. The School of Medicine has a faculty of more than 3,000 physicians, scientists, and allied health professionals, including members of the National Academy of Medicine and the National Academy of Sciences, and a distinguished recipient of the Albert E. Lasker Award in Medical Research. With an operating budget of more than $1.2 billion, the School of Medicine works closely in partnership with the University of Maryland Medical Center and Medical System to provide research-intensive, academic and clinically based care for more than 1.2 million patients each year. The School has over 2,500 students, residents, and fellows, and more than $540 million in extramural funding, with most of its academic departments highly ranked among all medical schools in the nation in research funding. As one of the seven professional schools that make up the University of Maryland, Baltimore campus, the School of Medicine has a total workforce of nearly 7,000 individuals. The combined School and Medical System (“University of Maryland Medicine”) has an annual budget of over $6 billion and an economic impact of more than $15 billion on the state and local community. The School of Medicine faculty, which ranks as the 8th highest among public medical schools in research productivity, is an innovator in translational medicine, with 600 active patents and 24 start-up companies. The School works locally, nationally, and globally, with research and treatment facilities in 36 countries around the world. Visit medschool.umaryland.edu