Dr. Paul Welling Is Recognized for His Innovative Physiological Research

The award recognizes a distinguished scientist who has made major contributions to understanding physiological processes through innovative research.

The Foundation Leducq, which has headquarters in Paris and Boston, focuses on improving human health through international efforts to combat cardiovascular and neurovascular disease. By forging scientific alliances that transcend national borders, and educating young researchers who thrive in an international context, the organization aims to promote innovation in cardiovascular and neurovascular research, allow researchers to benefit from an efficient use of resources, and develop long term collaborative relationships.

Dr. Welling’s work has transformed the understanding of potassium balance, and have provided an explanation for the protective effects of dietary potassium on blood pressure.

Hypertension is the greatest contributor to premature death and disability in the world. High dietary salt consumption is a key culprit, but growing evidence indicates that low potassium consumption has an equally important role. The mechanisms underlying the effects of potassium, and the implications for prevention and treatment of hypertension, remained obscure, until the Welling and his collaborators helped define a pathway, which they call the renal potassium-switch. Their work indicates that low potassium consumption, common in modern diets, causes the body to conserve potassium, which leads to increased sodium retention and higher blood pressure.

“Dr. Welling has led the way in helping to unravel the relationship between potassium, sodium and blood pressure,” said Scott Thompson, PhD, professor and chair of the UMSOM Department of Physiology. “He continues to do groundbreaking work with his innovative research.”

Dr. Welling, who is also director of the Maryland Center for Kidney Discovery, has earned international recognition as a leading expert on the molecular mechanisms of renal potassium balance. His laboratory is recognized for elucidating how ion transport molecules in the kidney control electrolyte balance, and for discovering how these molecules go awry in disorders of salt regulation and blood pressure. In his latest work with potassium, his laboratory employs a multidisciplinary approach that includes gene discovery, genomic approaches, in vitro models, genetically engineered mouse models and translational studies in humans.

The researchers in the network will work together better understand the role of this new pathway in humans. One key goal is to identify and study new targets in the pathway that could be exploited to develop new blood pressure drugs. Dr. Welling’s lab will delineate the molecular, structural and physiological basis of the pathway using genetically engineered mouse models.

“Prof. Welling deserves this top international honor,” said Dean E. Albert Reece, MD, PhD, MBA, who is also the University Executive Vice President for Medical Affairs and the John Z. and Akiko K. Bowers Distinguished Professor and Dean, of the University of Maryland School of Medicine.  “His work on potassium and hypertension has the potential to move from bench to bedside, and as a result improve millions of lives around the globe.” 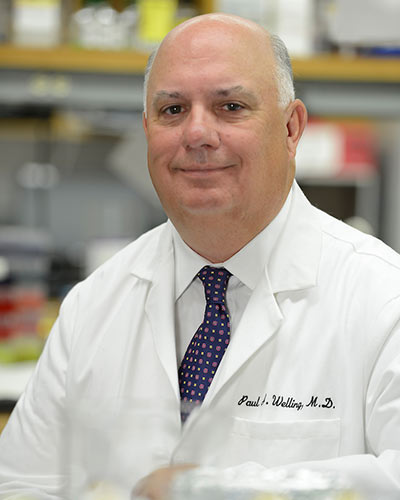