Dr. Rogers Has Been Active Throughout His Career in Research and Discovery as well as Training Scientists and Physician-Scientists

Dr. Rogers, a leading biochemist and research scientist who is recognized for his key discoveries in cardiac cell biology and signal transduction, will continue to serve as Executive Director of the Office of Research Affairs.  The Office serves as a “research hub” to assist faculty in expanding collaborative, innovative research leading to an increased number of novel competitive grant applications.  Over the past five years, UMSOM has seen unprecedented growth in its research portfolio, reaching record levels of grants and contracts, submissions and awards. Since 2013, total grants and contracts have surged by 42%, reaching a seminal milestone of more than $520 million in FY2018.

“Dr. Rogers has developed a cohesive team of senior colleagues who are engaged in their work, customer focused and collaborative. He has played a critical role in the growth of research funding at the School of Medicine,” said Dean Reece, who is also Executive Vice President for Medical Affairs at UM Baltimore, and the John Z. and Akiko K. Bowers Distinguished Professor and Dean, University of Maryland School of Medicine.

Under Dr. Rogers’ leadership, the Office of Research Affairs has also been an integral part of the UMSOM’s major initiative to recruit top scientists (“Special Trans-Disciplinary Recruitment Award Program or “STRAP”).  Over the past two years, UMSOM has recruited 15 teams of highly-funded (NIH) scientists who are leading investigators in the fields of brain development, cancer, cardiovascular-metabolic diseases among other critical areas.

Dr. Rogers has been active throughout his career in mentoring many PhD and MD/PhD students. Notably, for 16 years he was the Director of UMSOM’s Medical Scientist Training Program (MSTP), also known as the MD-PhD Program. Currently he is a co-Principal Investigator on a NIGMS R25 Post-Baccalaureate Research Education Program (PREP) that offers support and mentoring for under-represented minority students who seek to matriculate into PhD and MD/PhD programs. 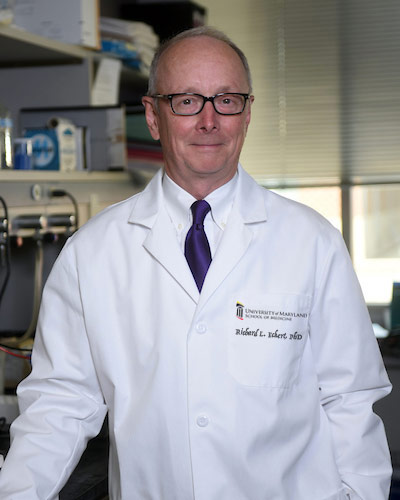