Robert Ferguson, MD, MACP, Clinical Professor in the Department of Medicine at the University of Maryland School of Medicine (UMSOM), and Director of the UMSOM Professionalism Enhancement Initiative, has been awarded the 2018 Dema C. Daley Founders Award by the Alliance for Academic Internal Medicine (AAIM).

The honor is given to a member of the internal medicine community who is recognized nationally as an educator, innovator, and leader.  The award is presented annually during Academic Internal Medicine Week.

“The Journal has been overwhelmingly successful and has published close to 500 articles thus far,” said Mel Blanchard, MD, Program Director in Internal Medicine at Washington University in St. Louis, in presenting the award.   “Dr. Ferguson is certainly more than deserving of this prestigious award. Kudos to you, Dr. Ferguson!”

In 2003, the award was dedicated to Dema C. Daley by the Association of Program Directors in Internal Medicine (APDIM), which later became part of AAIM.  Ms. Daley served as APDIM Executive Director from 1987 to 2000; recognizing her contributions, the APDIM Council promoted her to Executive Vice President in 2001, a position she held until her death in July 2002. During her 15 years as the association’s leader, Ms. Daley helped APDIM become “the preeminent professional organization in graduate medical education noted for its promotion of excellence and innovation in leadership and educational methodologies.”

In selecting a recipient, predominant attention is given to a candidate’s contributions that have influenced areas of undergraduate and graduate medical education and the development of training programs in internal medicine, AAIM, or other organizations that are educationally focused.

In addition to serving as Treasurer for the American College of Physicians over the past 20 years, Dr. Ferguson is currently leading the UMSOM Professionalism Enhancement Initiative.

“We are honored to have a recognized leader in academic medicine such as Dr. Ferguson working with us,” said E. Albert Reece, MD, PhD, MBA, Executive Vice President for Medical Affairs, UM Baltimore, and the John Z. and Akiko K. Bowers Distinguished Professor and Dean, UMSOM.  “He has served the internal medicine community over many years, and is having a significant impact in his current role at UMSOM.”

“This is truly a great honor for me,” said Dr. Ferguson, noting that he has been a member of APDIM for 36 years.

About the APDIM (Now Part of AAIM) 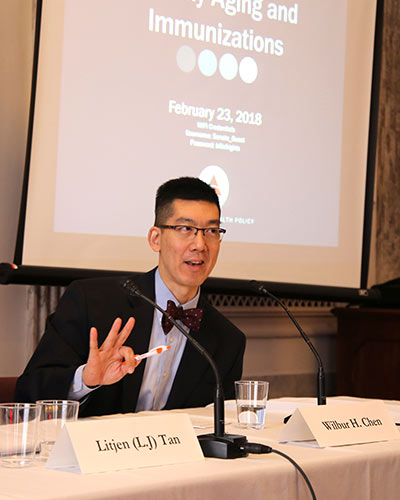 Today at a briefing on Capitol Hill, Wilbur Chen, MD, MS, Associate Professor of Medicine at the University of Maryland School of Medicine, warned that the U.S. population of adults 65 and older is expected to rise significantly over the next few decades, making vaccinations against diseases like influenza, pneumonia and shingles for this population very critical.