Researchers have long known that the neurotransmitter dopamine plays a key role in driving behavior related to pleasurable goals, such as food, sex and social interaction. In general, increasing dopamine boosts the drive toward these stimuli. But dopamine’s role in allowing organisms to avoid negative events has remained mysterious.

The new study establishes for the first time that dopamine is central in causing behavior related to the avoidance of specific threats. The work was published today in the journal Current Biology.

“This study significantly advances what we know about how dopamine affects aversively motivated behaviors,” said Joseph F. Cheer PhD, a professor in the UMSOM Department of Anatomy & Neurobiology and the study’s corresponding author. “In the past, we thought of dopamine as a neurotransmitter involved in actions associated with the pursuit of rewards. With this new information we can delve into how dopamine affects so many more kinds of motivated behavior.”

To better understand the role that dopamine plays in this process, Dr. Cheer and his colleagues, including principal author Jennifer Wenzel, PhD, a fellow in Dr. Cheer’s laboratory, studied rats, focusing on a particular brain area, the nucleus accumbens. This brain region plays a crucial role in linking the need or desire for a given reward – food, sex, etc. – with the motor response to actually obtain that reward.

To study the animals under natural conditions, they used optogenetics, a relatively new technique in which specific groups of neurons can be controlled by exposure to light. In this case, Dr. Cheer’s group used a blue laser to stimulate genetically modified rats whose dopamine neurons could be controlled to send out more or less dopamine. In this way, they were able to see how dopamine levels affected the animals’ behavior. The principal advantage of this approach: he could control dopamine levels even as the animals moved freely in their environment. 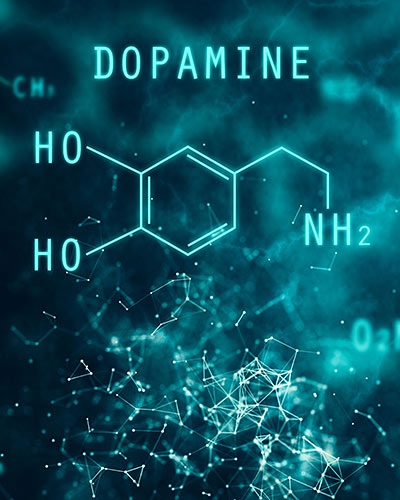 The researchers subjected the animals to small electric shocks, but also taught the animals how to escape the shocks by pressing a small lever. Using optogenetics, they controlled the amount of dopamine released by neurons in the nucleus accumbens. Animals with high levels of dopamine in this brain region learned to avoid a shock more quickly and more often than animals that had a lower level of dopamine in this region.

Dr. Cheer says that this indicates that dopamine causally drives animals to avoid unpleasant or painful situations and stimuli. The results greatly expand the role that dopamine plays in driving behavior.

Dr. Cheer argues that the research sheds light on brain disorders such as post-traumatic stress disorder and depression. In depression, patients feel unable to avoid a sense of helplessness in the face of problems, and tend to ruminate rather than act to improve their situation. In PTSD, patients are unable to avoid an overwhelming sense of fear and anxiety in the face of seemingly low-stress situations. Both disorders, he says, may involve abnormally low levels of dopamine, and may be seen on some level as a failure of the avoidance system.

In both depression and PTSD, doctors already sometimes treat patients with medicine to increase dopamine and there are now clinical trials testing use of endocannabinoid drugs to treat these conditions. Dr. Cheer suggests that this approach may need to be used more often, and should certainly be studied in more detail.

“Using optogenetics to understand the brain is quite revolutionary,” said E. Albert Reece, MD, PhD, MBA, Executive Vice President for Medical Affairs at UM Baltimore, and the John Z. and Akiko K. Bowers Distinguished Professor and Dean, University of Maryland School of Medicine. “This research holds the potential to elucidate questions that we have long wanted to answer about human behavior and human mood disorders. It is not only fascinating on a scientific level, it has potentially powerful clinical implications.”