“From Groundbreaking to Record-Breaking:”

“The School of Medicine’s ambitious agenda and momentum led us to climb new heights, which has resulted in the highest impact.” With these remarks, UMSOM Dean E. Albert Reece, MD, PhD, MBA, who is also the Executive Vice President for Medical Affairs, University of Maryland, and the John Z. and Akiko K. Bowers Distinguished Professor, kicked off his 2018 State of the School address, “From Groundbreaking Achievements to Record-Breaking Milestones.”

Adding to the day’s festivities was a special virtual tour and ceremonial ribbon-cutting marking the opening of UMSOM’s newest research building, Health Sciences Research Facility (HSRF) III. “Today, we honor and celebrate a very significant milestone for the School of Medicine,” noted Dean Reece, speaking to a standing-room-only crowd of faculty, staff, students, and top state and local officials in the school’s newly renovated Leadership Hall.

HSRF III is the largest facility of its kind in the entire University System of Maryland. The research building expands the School of Medicine’s footprint to more than 2.5 million square feet, housing more than 400 personnel and generating an additional estimated $107.4 million in annual research funding. “Our entire academic community rose to the occasion. They imaged the unimaginable and worked relentlessly to bring this project to fruition.” said Dean Reece.

Maryland Governor Larry Hogan, Baltimore Mayor Catherine Pugh, Maryland State Treasurer Nancy Kopp, UMB President Jay A. Perman, MD, as well as University and Medical System leadership were in attendance to commemorate this historic event. “With the addition of this incredible world-class facility, the state of Maryland and the University of Maryland School of Medicine will continue to shine as national and global leaders in innovation and next-generation medical technology,” declared Governor Hogan. 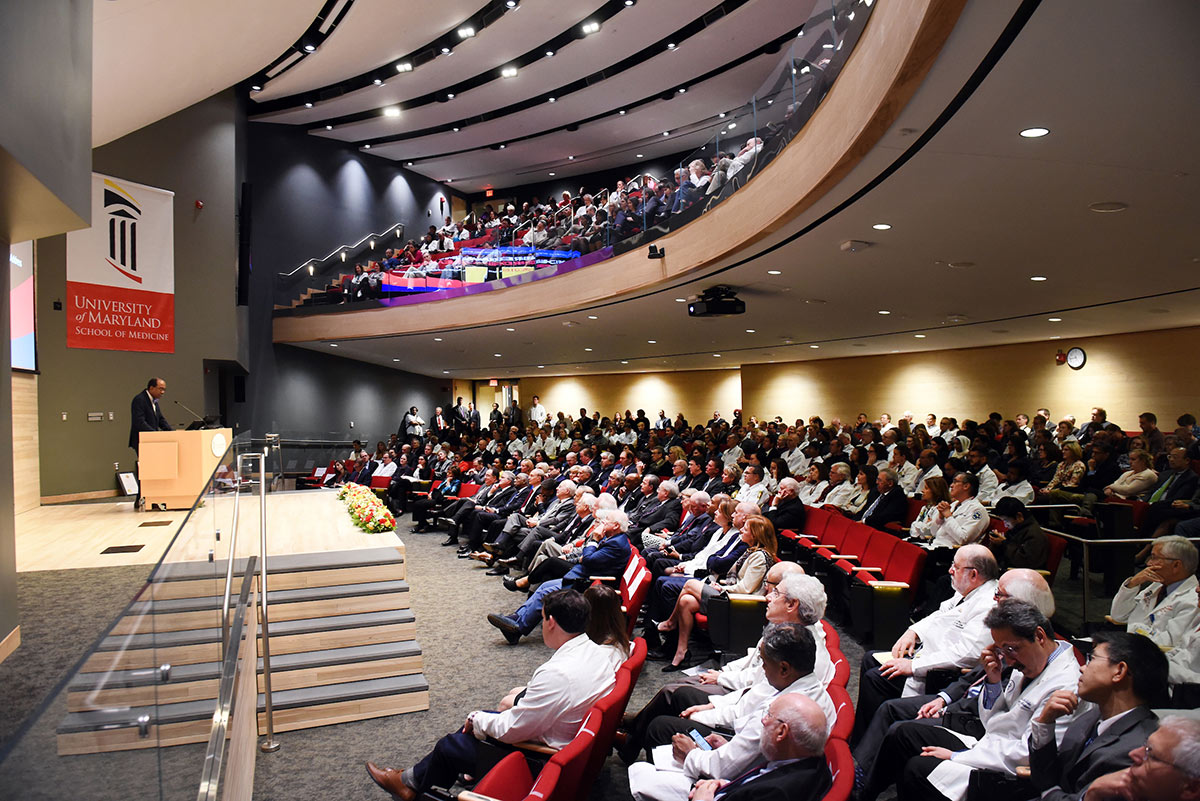 Following a year of historic milestones in 2017, UMSOM attained even greater levels of accomplishment over the past year. The school made unprecedented gains in research funding and clinical revenue. Clinical care broke new records with nearly $345 million in clinical revenues–an increase of 24 percent over the past five years—while UMSOM scientists and clinicians received $537 million in grants and contracts, a 20.1% increase over 2017. This year’s State of the School Address also featured a series of videos that highlighted the accomplishments of faculty, staff, and students over the year. Highlights included UMSOM’s multifaceted response to the opioid epidemic, as well as discoveries in congenital heart disease, and the learning experiences of first-year medical students.

A second video featured key 2018 highlights across all mission areas—Research, Patient Care, Education and Community Impact—while a third shared short vignettes of some of the key clinical moments in the practice of medicine. “I am tremendously pleased with all our initiatives, and the amazing results, that have contributed to improve the health and well-being of the citizens of Maryland, the nation, and beyond,” said Dean Reece. 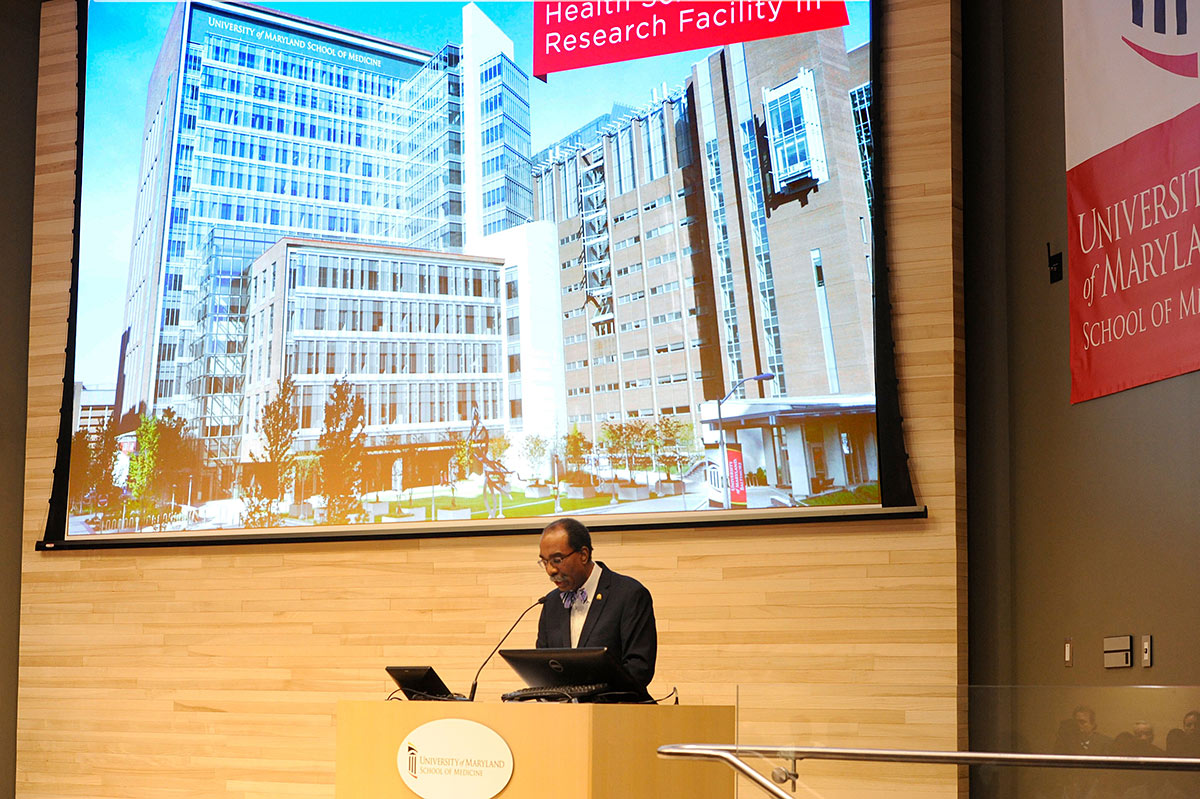 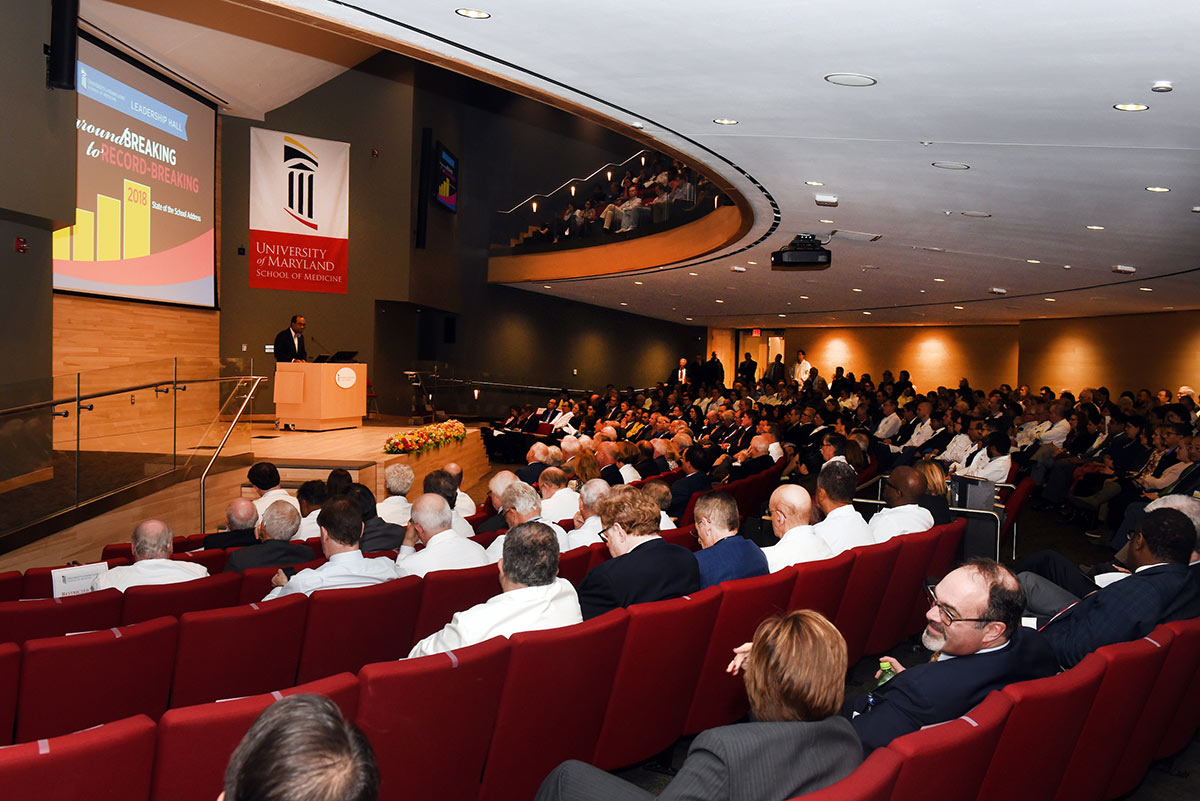 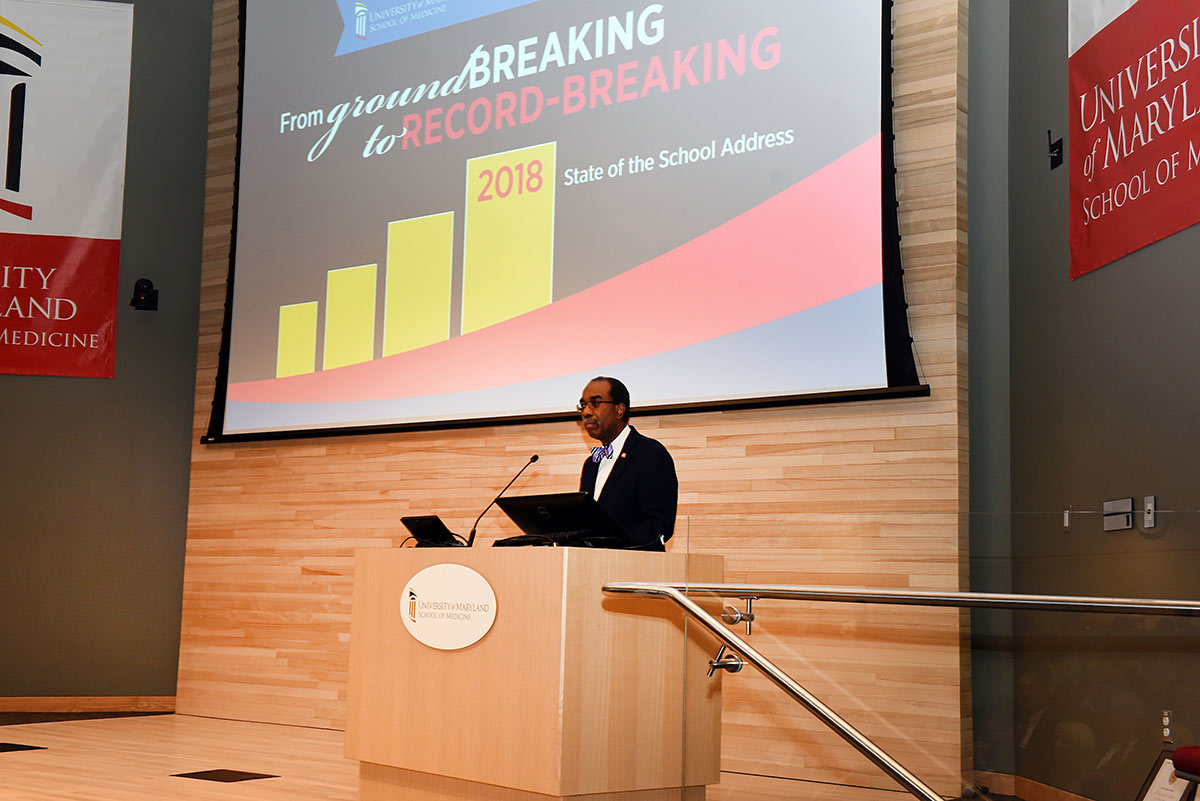 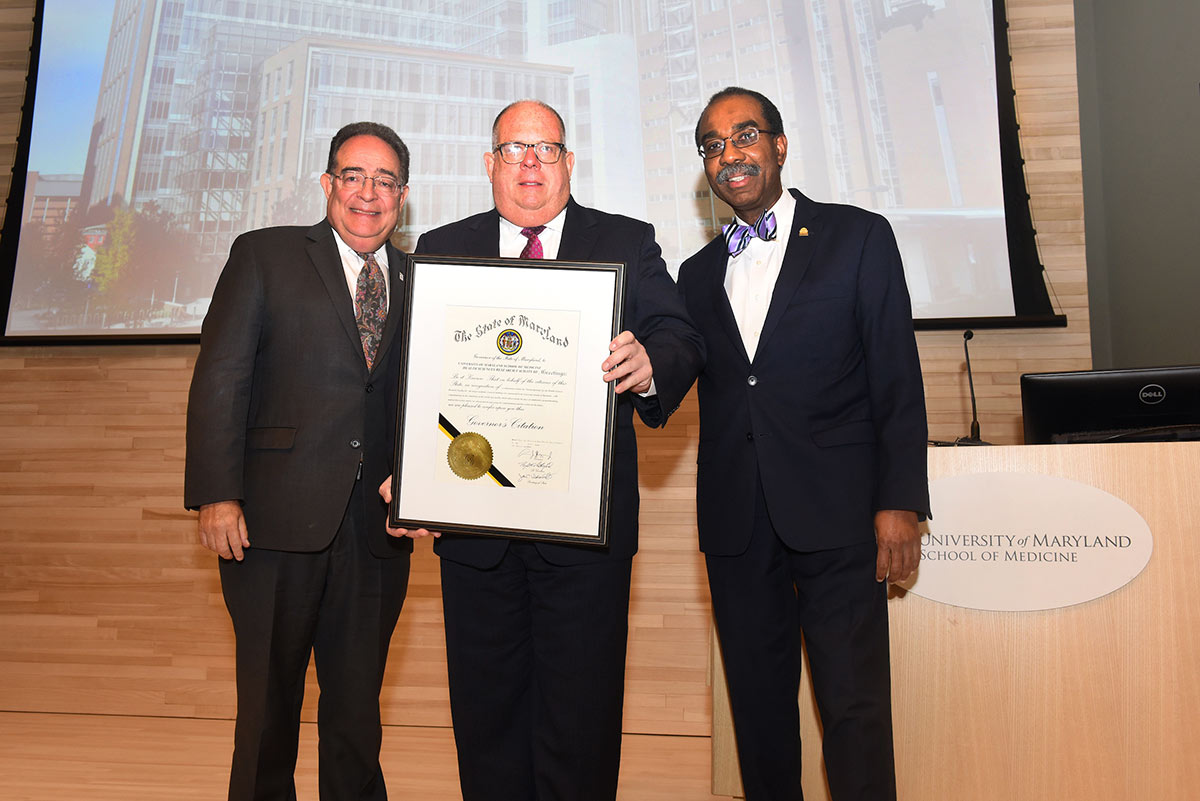 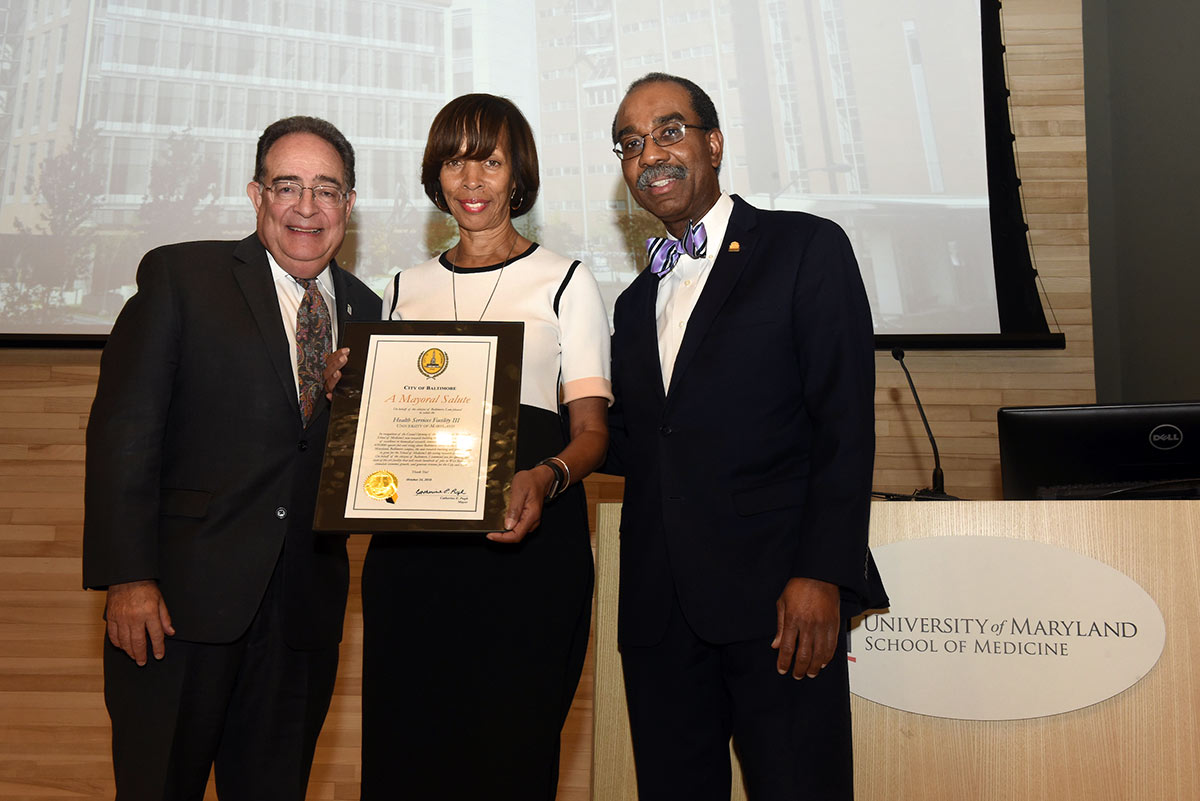 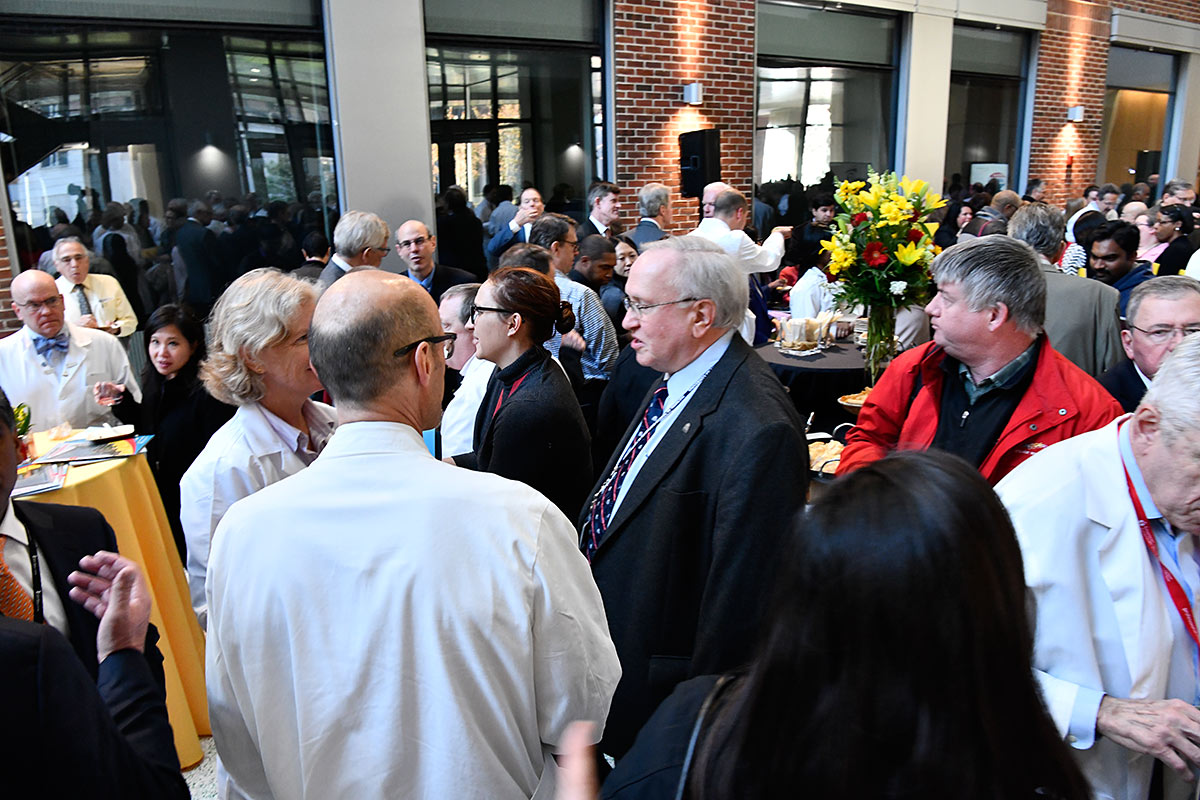 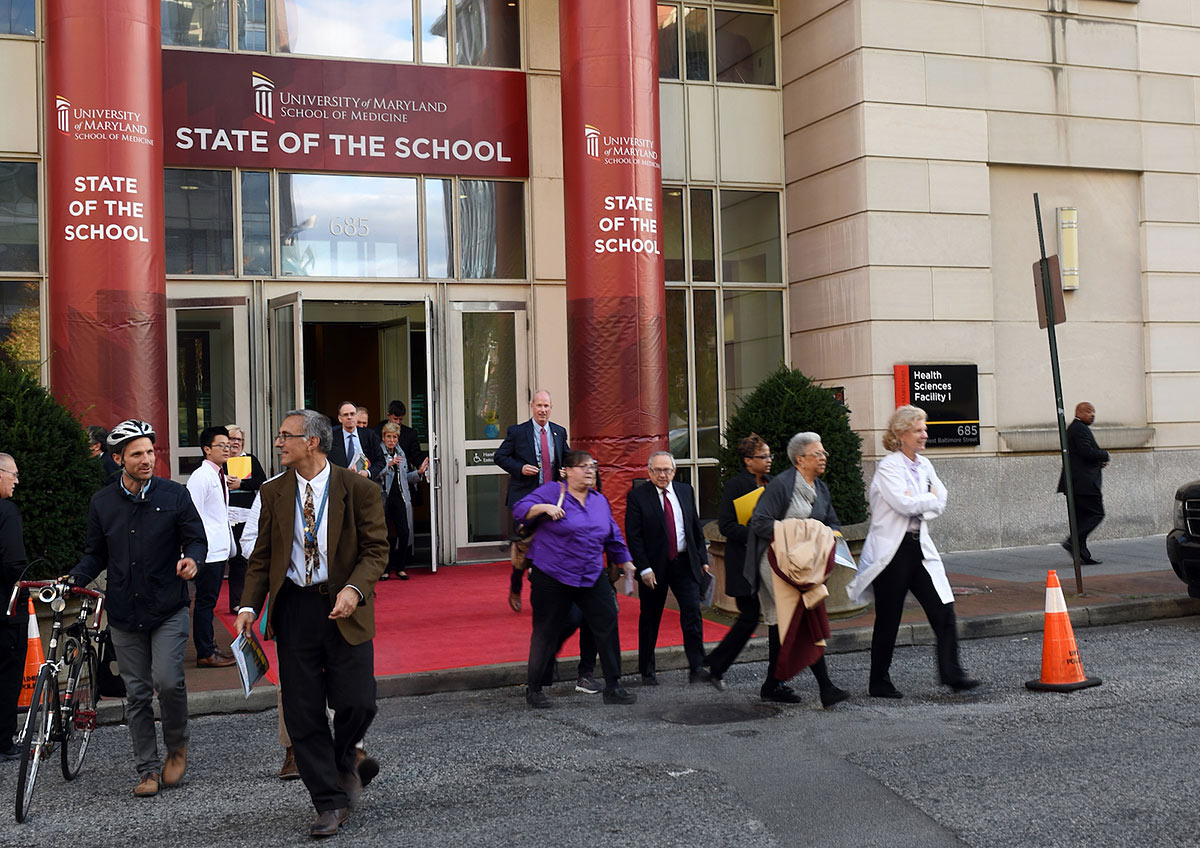 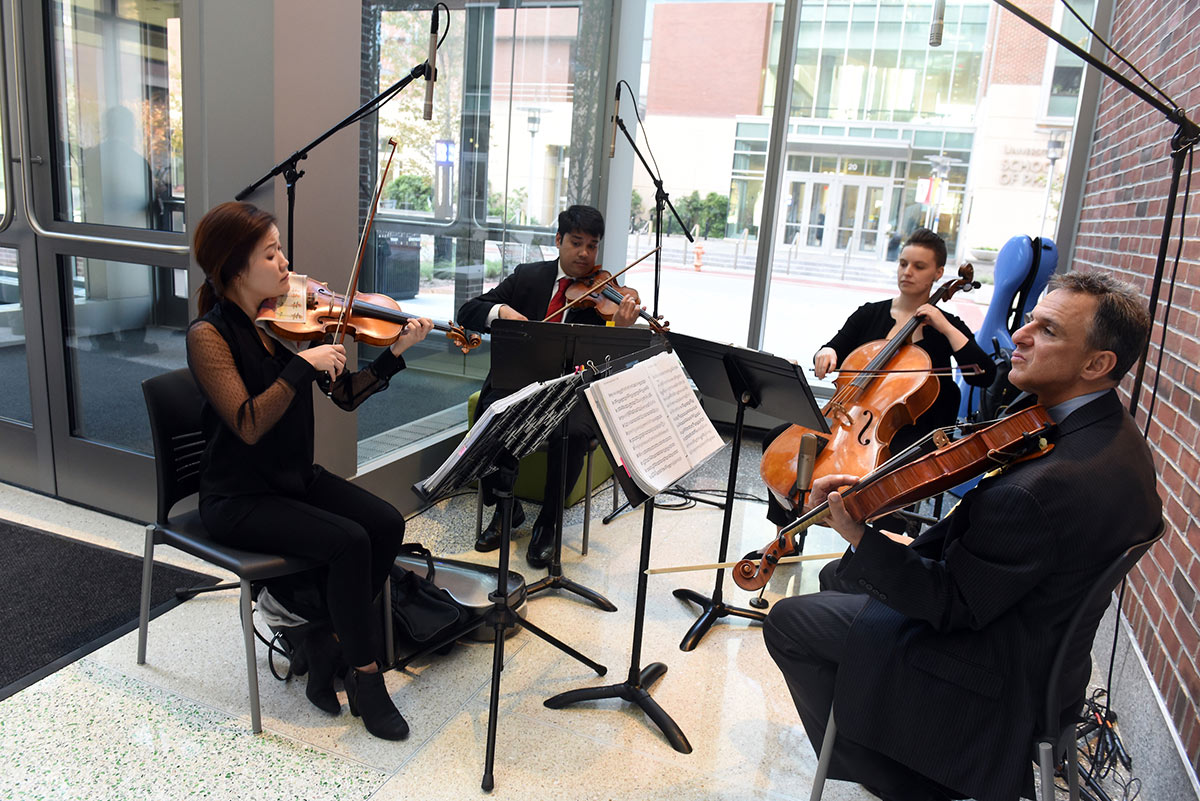 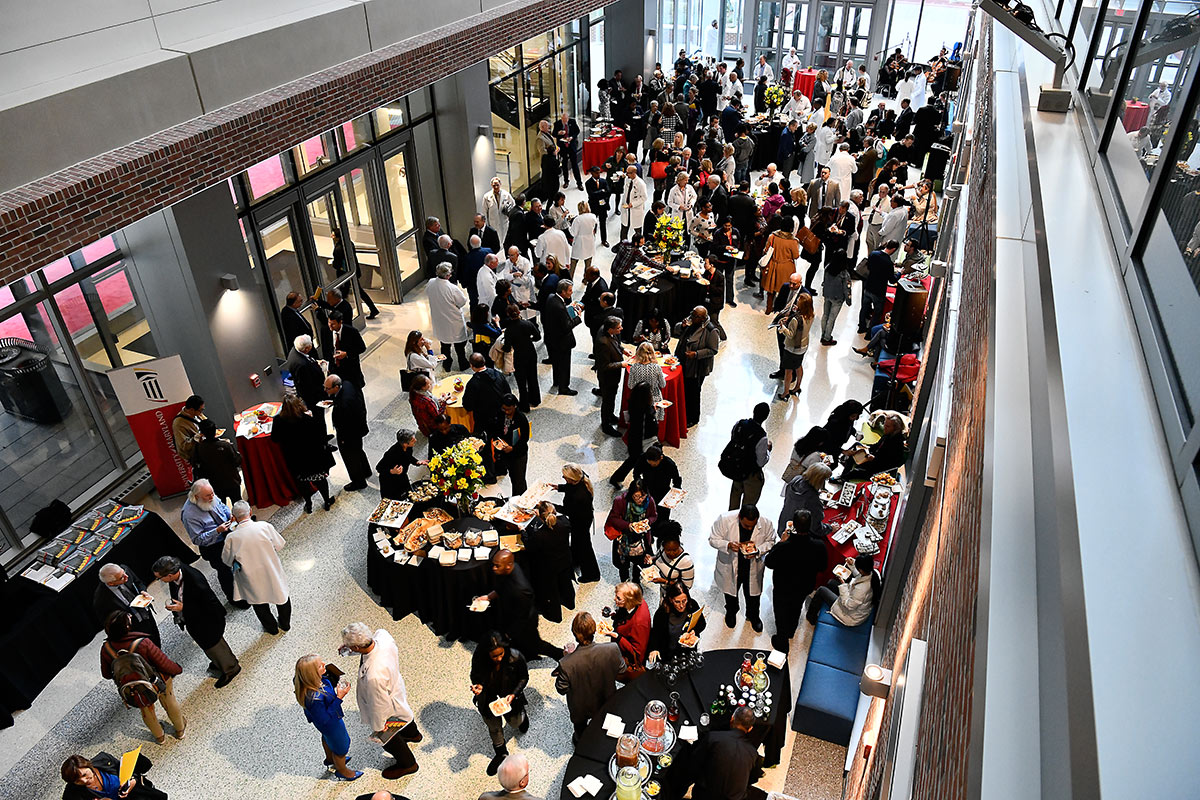 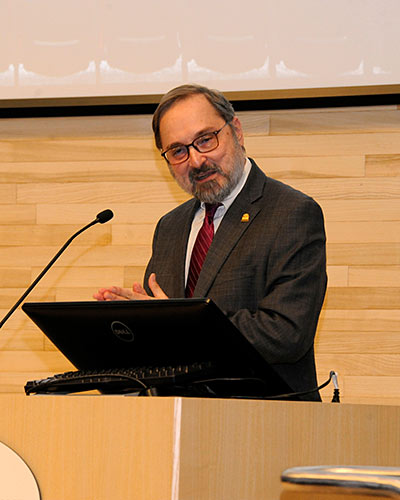 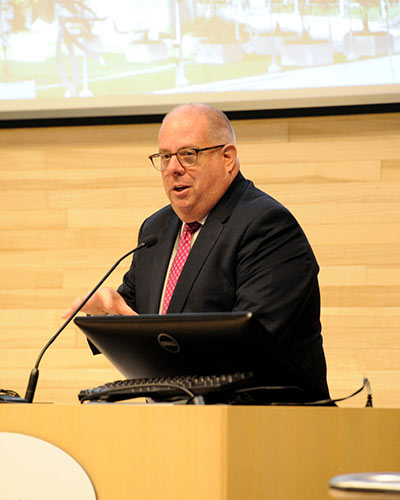 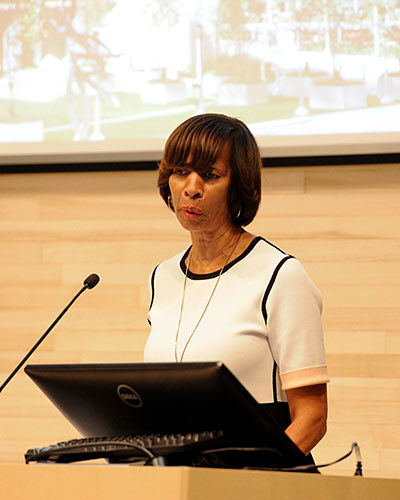 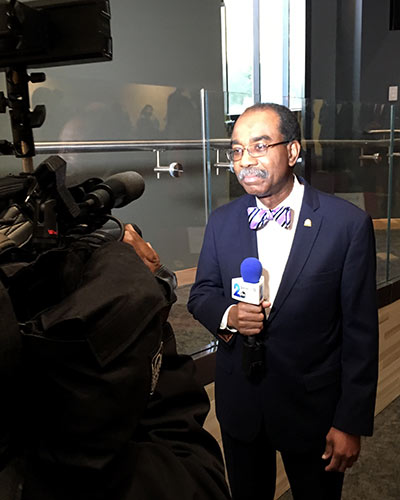 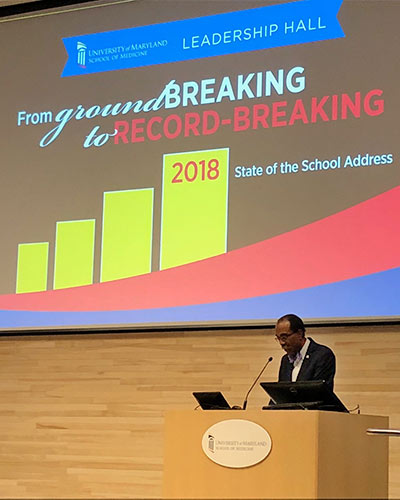 Now in its third century, the University of Maryland School of Medicine was chartered in 1807 as the first public medical school in the United States. It continues today as one of the fastest growing, top-tier biomedical research enterprises in the world -- with 43 academic departments, centers, institutes, and programs; and a faculty of more than 3,000 physicians, scientists, and allied health professionals, including members of the National Academy of Medicine and the National Academy of Sciences, and a distinguished recipient of the Albert E. Lasker Award in Medical Research. With an operating budget of more than $1 billion, the School of Medicine works closely in partnership with the University of Maryland Medical Center and Medical System to provide research-intensive, academic and clinically-based care for more than 1.2 million patients each year. The School has over 2,500 students, residents, and fellows, and more than $530 million in extramural funding, with most of its academic departments highly ranked among all medical schools in the nation in research funding. As one of the seven professional schools that make up the University of Maryland, Baltimore campus, the School of Medicine has a total workforce of nearly 7,000 individuals. The combined School and Medical System (“University of Maryland Medicine”) has an annual budget of nearly $6 billion and an economic impact more than $15 billion on the state and local community. The School of Medicine faculty, which ranks as the 8th highest among public medical schools in research productivity, is an innovator in translational medicine, with 600 active patents and 24 start-up companies. The School works locally, nationally, and globally, with research and treatment facilities in 36 countries around the world. Visit medschool.umaryland.edu/ 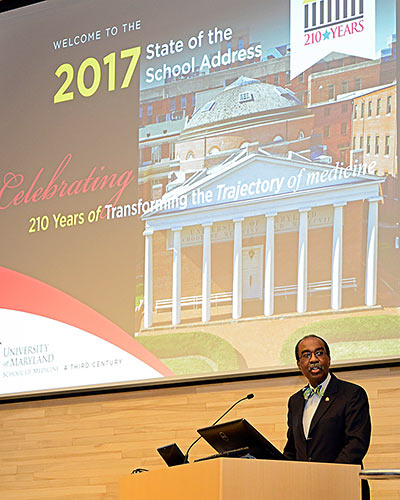 The 2017 State of the School Address: Transforming the Trajectory of Medicine: A Review of the Centuries

The 2015 State of the School Address: Undaunted in Purpose, Resilient in Execution