CVD Researchers to Develop a Vaccine to Protect against Shigella and Certain E. Coli

The University of Maryland School of Medicine (UM SOM) has been awarded a three-year, $2.47 million grant from the National Institute of Allergy and Infectious Diseases to develop a vaccine to protect against Shigella and Enterotoxigenic Escherichia coli (ETEC), pathogens which are among the leading causes of diarrheal disease in young children in developing countries and a common cause of “traveler’s diarrhea” among travelers to these countries.

“Nearly half a million children die each year of diarrheal diseases, and Shigella and ETEC infections are a common cause,” said Dr. Barry. “This grant will help us translate our research into a vaccine ready for human trials.”

Shigella and ETEC infections typically follow the ingestion of contaminated food or water. Shigella can also be transferred by person-to-person contact. The vaccine to be developed will include up to four live but mild strains of Shigella, which will express protective antigens from ETEC, a type of E. Coli.

Researchers in UM SOM’s Center for Vaccine Development (CVD), under the direction of Dr. Barry, have already developed a prototype Shigella-ETEC vaccine that has been tested in animals. The overall goal of this latest research is to translate the current prototype Shigella-ETEC vaccine to a potential human vaccine ready to enter Phase 1 clinical trials.

“Vaccine development is a critical part of our research here at the University of Maryland School of Medicine. This generous funding from NIH will help move this important Center for Vaccine Development research to the next step of a clinical trial in humans,” said UM SOM Dean E. Albert Reece, MD, PhD, MBA, who is also Vice President, Medical Affairs, University of Maryland and the John and Akiko K. Bowers Distinguished Professor.

Commemorating its 210th Anniversary, the University of Maryland School of Medicine was chartered in 1807 as the first public medical school in the United States. It continues today as one of the fastest growing, top-tier biomedical research enterprises in the world -- with 43 academic departments, centers, institutes, and programs; and a faculty of more than 3,000 physicians, scientists, and allied health professionals, including members of the National Academy of Sciences, and a distinguished recipient of the Albert E. Lasker Award in Medical Research. With an operating budget of more than $1 billion, the School of Medicine works closely in partnership with the University of Maryland Medical Center and Medical System to provide research-intensive, academic and clinically-based care for more than 1.2 million patients each year. The School has over 2,500 students, residents, and fellows, and nearly $450 million in extramural funding, with more than half of its academic departments ranked in the top 20 among all public medical schools in the nation in research funding. As one of the seven professional schools that make up the University of Maryland, Baltimore campus, the School of Medicine has a total workforce of nearly 7,000 individuals. The combined School and Medical System (“University of Maryland Medicine”) has a total budget of $5 billion and an economic impact of nearly $15 billion on the state and local community. The School of Medicine faculty, which ranks as the 8th-highest public medical school in research productivity, is an innovator in translational medicine with 600 active patents and 24 start-up companies. The School works locally, nationally, and globally, with research and treatment facilities in 36 countries around the world. Visit medschool.umaryland.edu 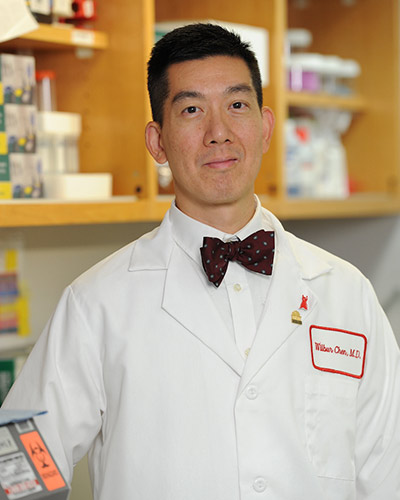 Wilbur Chen, MD, MS, Associate Professor of Medicine at the University of Maryland School of Medicine (UM SOM), was elected as a Fellow by the Board of Directors of the Infectious Disease Society of America (IDSA). Fellowship in IDSA is a top honor for those who have achieved professional excellence and have provided significant service as an infectious disease physician and scientist.