One grateful patient --breast cancer survivor Carolyn Choate, 59, -- has taken her gratitude a step further, or in this case, 300 miles further. Not just thankful for the breast cancer treatment she received, she is forever indebted to the scientist, the late Angela Brodie, PhD, who originally discovered the treatment, and she wants others to know about it.

As a result, Carolyn and her daughter Sydney Turnbull, 27, have just launched a 300-mile “River of Life” kayaking journey that will take them from Port Jervis, NY, on the Delaware River, all the way to Baltimore’s Inner Harbor, where they will arrive on August 27. Their goal: Raise awareness and support along the way for future generations of breast cancer research at the University of Maryland School of Medicine (UM SOM), where Dr. Brodie conducted her groundbreaking research for nearly 40 years, until her passing in June of this year.

The mother-daughter team, which is expected to complete their 17-day kayaking journey in Baltimore on August 27 at 9:00 a.m. near the amphitheater between the Pratt and Light Street Pavilions, have been raising support for a Distinguished Professorship in honor of Dr. Brodie, Ph.D., who is recognized internationally for pioneering the use of aromatase inhibitors to treat a common form of breast cancer.

Ms. Choate credits Dr. Brodie’s work with saving her life. “It’s important to me that I do whatever I can to honor Dr. Brodie and continue to support the kind of innovation that, quite literally, saved my life, and the lives of countless other women,” said Ms. Choate, who has raised money and awareness for breast cancer research by advocating at home and abroad.

With the goal of raising $500,000 to complete a $2.5 million Distinguished Professorship in honor of Dr. Brodie, the mother-daughter team said they are celebrating the millions of women diagnosed and recovering from breast cancer, the exceptional research and development like Dr. Brodie’s that has saved many lives so far, and the promise of future generations of research in this critical area.

On August 28, Ms. Choate will be recognized by the Baltimore Orioles during their game against the Seattle Mariners. Learn more about this event.

Dr. Brodie, a fourth-generation scientist, passed away on June 7. She was professor emeritus of pharmacology and experimental therapeutics at UM SOM and an internationally recognized researcher at the University of Maryland Marlene and Stewart Greenebaum Comprehensive Cancer Center. She pioneered the development of aromatase inhibitors, which help to prevent the recurrence of breast cancer in postmenopausal women with estrogen-sensitive cancer by reducing the level of the estrogen in the body. Dr. Brodie’s distinguished career at the University of Maryland spanned 37 years until her retirement in 2016. 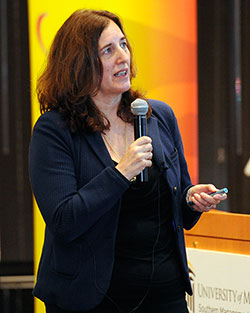 More than 500 people saw leading cancer scientists discuss their cutting-edge work at the fourth annual University of Maryland School of Medicine (UM SOM) Festival of Science, a one-day celebration of research at the school held November 10, 2016 the SMC Campus Center. The conference, titled “Cancer Research: Translational Discoveries to Next Generation Treatments,” featured a range of UM SOM’s top cancer researchers, who are working on the front lines of science to unravel crucial problems involving cancer in its many forms.