Joseph R. Scalea, MD, assistant professor of surgery in the University of Maryland School of Medicine (UM SOM), as well as Director of Pancreas and Islet Cell Transplantation in the Division of Transplantation in the UM SOM Department of Surgery, has received the American Surgical Association Foundation Fellowship. This prestigious award supports gifted young surgeons who choose careers in investigation and academic surgery.

The award, which is for $150,000, has been given out 54 times since 1982. It is given out annually to between one and three surgeons, and is open to American surgeons who have been in practice for less than five years.

Dr. Scalea has focused his research on innovative ways to suppress immunity. Transplant patients currently must take a powerful array of medicines to suppress the immune system. These drugs often work, but they also have serious side effects. Dr. Scalea is working on using naturally occurring white blood cells that capable of suppressing immunity. By increasing the number and potency of these cells, it may be possible to avoid using medicines, and thus decrease side effects.

Dr. Scalea has a Bachelor’s Degree from Virginia Polytechnic Institute and an MD degree from UM SOM. From 2009 to 2011, he was a postdoctoral fellow at the Harvard Medical School Transplantation Biology Research Center at Massachusetts General Hospital. Prior to returning to UM SOM earlier this year, he was a fellow at the University of Wisconsin in Madison.

Over his career, Dr. Scalea is the author of more than 40 peer-reviewed articles, six book chapters, and has given more than 30 local, national and international lectures.

“This is a richly deserved honor for Dr. Scalea,” said UM SOM Dean E. Albert Reece, MD, PhD, MBA, who is also vice president for medical affairs at the University of Maryland and the John Z. and Akiko K. Bowers Distinguished Professor. “Our transplant division has long been a strength, and this award for a younger faculty member only underscores the fact that it will continue to be so.” 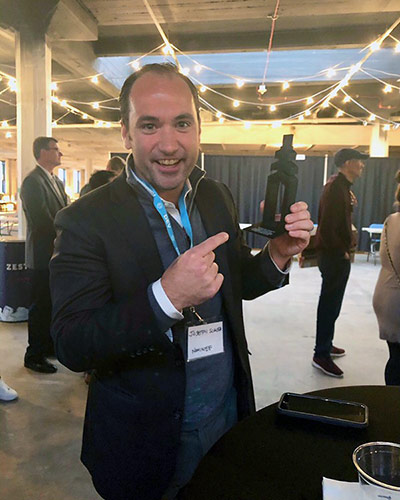 Invention of the Year: University of Maryland School of Medicine’s kidney delivery by drone

The partnership behind the flight included a collaboration between Dr. Joseph Scalea of University of Maryland School of Medicine and UMD’s A. James Clark School of Engineering, surgeons and researchers at UMMC, the Living Legacy Foundation and AiRXOS.