Praised for Her Extraordinary Commitment and Leadership

In a moving speech before a large audience recently at Westminster Hall, Deborah M. Stein, MD, MPH, newly invested as the R Adams Cowley, MD Professor in Shock and Trauma, used those words to reflect on her father’s influence and how proud he is to see the family’s legacy of healing continue. “Becoming a surgeon was all about my father -- I wanted to be him, and to heal with my hands, just as he had done.”  She also spoke emotionally about her late grandfather, who even with limited knowledge, was able to provide medical care for fellow concentration camp prisoners during World War II.  She said that he had always wanted to be a doctor, but never had the opportunity once he immigrated to the United States.

"(As with my grandfather), I am so in awe of police officers and firefighters and our military personnel – people who run toward gun shots and into the fire, " she said.  “I can’t do that, but I can heal.”In all, it was a festive and celebratory event for Dr. Stein with many family members, colleagues and friends in attendance – including Mrs. R Adams Cowley and her son, R Adams Cowley, II. Distinguished guests, including John Ashworth, who was then Interim President & CEO of the University of Maryland Medical Center, The Honorable Francis X. Kelly, Jr., and The Honorable C. A. “Dutch” Ruppersberger who shared memories of their close work with Dr. Cowley in developing the Shock Trauma Center and the statewide emergency medicine network.

Testimony and tribute was given to Dr. Stein by two of her mentors, Dr. Lenworth M. Jacobs, MD, MPH, Vice President of Academic Affairs and Chief Academic Officer at Hartford Hospital, and Dr. Thomas M. Scalea, , MD, FACS, MCCM, the Honorable Francis X. Kelly Distinguished Professor of Trauma Surgery, Director, Program in Trauma, and Physician-in-Chief, R Adams Cowley Shock Trauma Center, as well as the Harrison Family --Grant, his father, Skip, and his mother, Jenny – who spoke of Dr. Stein’s compassion and clinical expertise in caring for their son who was critically injured and is now recovered. Dr. Stein highlighted one of the speakers in particular, Dr. Thomas Scalea, with a heartfelt tribute to him as her “voice, her conscience, her source of confidence, her mentor in every way.”

“What can I possibly say to the man who, quite literally, changed my life?  You have trained me to be the best, to provide the absolute best care to patients.  You have modeled kindness and compassion and humanity and sympathy and service,” she said.

In many ways, the event was also a celebration of the people who have built a lasting legacy in the field of Shock Trauma – Dr. R Adams Cowley, Dr. Thomas Scalea, and now Dr. Deborah Stein and the teams behind them – who with their tireless leadership, dedication and innovation, have made the R Adams Cowley Shock Trauma the best of its kind in the world.

Following in the footsteps of her predecessors, Dr. Stein has become an internationally recognized surgeon-scientist – widely known not just for her clinical accomplishments, but academic and research leadership as well.  .She is s author of 100 peer-reviewed articles and 13 book chapters.  Her national service includes active participation in virtually every major trauma, critical care and surgical societies.  Dr. Stein’s research interests are in the fields of traumatic brain injury, hemorrhagic shock, biomechanics of injury and functional outcomes following traumatic injury.  She is currently Principal Investigator for five federally-funded grants and serves as Co-Investigator for an additional four federally-funded projects.

Appropriately, she now holds the professorship named for the legendary R Adams Cowley, MD, a 1944 graduate of the SOM, who developed the first clinical shock trauma unit in the nation here, established the “golden hour” theory and who successfully redirected the lives of thousands of trauma victims.

Charles E. Wiles, III, MD, FACS, FCCM Professor of Surgery SUNY at Buffalo Jacobs School of Medicine and Biomedical Sciences, a former Shock Trauma physician, was excited about what the endowment means for the future.

“The R Adams Cowley Chair, which is named for a founding father of trauma care systems, who changed the way the world treats injured patients, will help provide University of Maryland School of Medicine with resources to retain and eventually recruit surgeons at the forefront of the field,” he said.  “When I mention the Intergalactic Shock Trauma Center of the Universe to our residents and students here in Buffalo they know exactly what I'm talking about. Dr. Cowley launched it, Dr. Scalea put it into orbit and Dr. Stein and others to come will take it "to infinity and beyond!,” Dr. Wiles said.

“Above all, this was a ceremony about standing on the shoulders of giants: Dr. Cowley, Dr. Scalea and now Dr. Stein, and with support from our generous donors – many of whom are current and former Shock Trauma physicians, said Dr. E. Albert Reece.  “University of Maryland Medicine forever benefits from this legacy that has and will continue to save thousands and thousands of lives.”

For Dr. Stein, it is just doing what she truly loves to do.  “It is an honor and I will always be humbled by the privilege of bearing witness to the most personal of moments in my patients’ and their families’ lives, she said.”  Looking down on the event, her grandfather would be very proud. 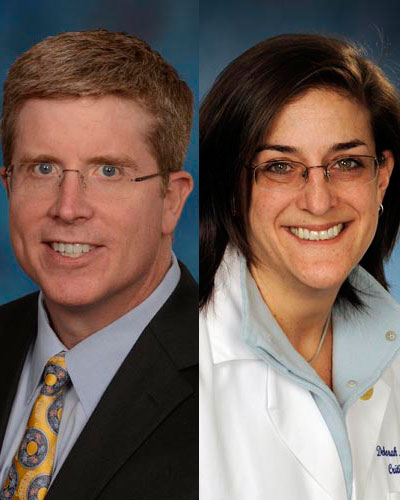