The Cryor Tenure Defined by School’s Unprecedented Success and Growth; Egan Has Served as an Advisor to the U.S. Department of Treasury, Corporate Director and Board Leader in Education and Non-Profit Organizations

University of Maryland School of Medicine (UMSOM) Dean, E. Albert Reece, MD, PhD, MBA, kicked off a celebration and recognition of longstanding Chair of the UMSOM’s Board of Visitors (BOV), Michael E. Cryor, President of The Cryor Group and recognized strategic counselor and public leader, for his distinguished service to the UMSOM for the past 10 years. At the celebration, Dean Reece announced that current UMSOM Board Member Cynthia L. Egan has been selected as the new Chair of the UMSOM Board. Ms. Egan, a corporate governance professional who has had a highly successful career as a corporate director and operating executive in financial services, began her tenure following board approval on December 3, 2019. Mr. Cryor, who was named Chair Emeritus at the celebration, will remain a member of the BOV. The BOV is a non-governing, non-fiduciary advisory board.

“Words cannot describe the depth of appreciation and gratitude we all feel toward Michael Cryor for the tremendous service and longstanding leadership he has provided to the School of Medicine. On a personal note, I will always consider Michael to be a dear friend, colleague, and advisor who has helped guide the UMSOM through a period of unparalleled success. For this, I will be forever indebted to him,” said Dean Reece, who is also Executive Vice President for Medical Affairs, UM Baltimore, and the John Z. and Akiko K. Bowers Distinguished Professor. 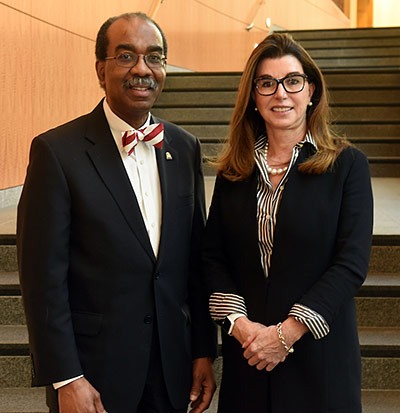 “At the same time,” Dean Reece added, “We are so very fortunate to have an outstanding, nationally-recognized senior executive and leader, Cynthia Egan, to begin a new chapter and help guide UMSOM into the future.”

Michael Cryor has been a stalwart figure and visionary leader both in Baltimore and nationally for many years, recognized for his ability to facilitate large complex agreements in both the public and private sectors. The late U.S. Representative Elijah Cummings called him, “one of the greatest organizers I have ever seen.”

He has led some of the most significant public initiatives in the past several years across the socioeconomic spectrum, benefitting some of the largest corporations and prestigious public-sector organizations in the world. He was a lead advisor in the $8 billion merger of Constellation by the Exelon Corporation. Following the unrest in Baltimore in 2015, he was appointed Chair of OneBaltimore by the City’s civic leadership to address many of the multi-generational systemic barriers that have plagued Baltimore and many urban cities throughout America. Mr. Cryor led the Baltimore “Believe” campaign in the early 2000s to abate the escalating increase in crime and drug addiction. Mr. Cryor and his team developed a novel advertising campaign that was intended to run for weeks. Instead, it ran for years. 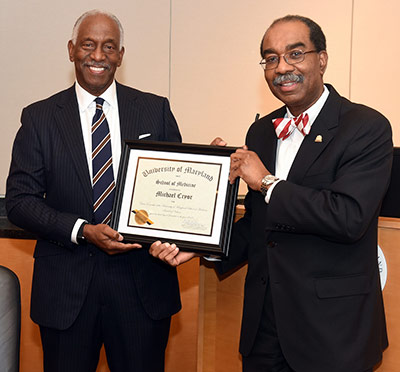 He is a former Executive Vice President for Susan Davis International, a public affairs firm headquartered in Washington, D.C., where he represented Fortune 500 companies and a broad range of national policy and public affairs initiatives. His earlier positions include those of psychologist and Director of the Department of Consultation and Education at the Albert Einstein College of Medicine in New York; Associate Dean at Morgan State University; and various executive positions in both chambers of the United State Congress. Mr. Cryor is also remembered as a well-known television personality who hosted one of Baltimore’s longest– running and successful public affairs programs. For nearly ten years he co-hosted WJZ-TV’s On Time, an award-winning program. In 2007, he was elected Chair of the Maryland Democratic Party and was instrumental in the historic election of President Barack Obama.

Mr. Cryor earned his Bachelor’s Degree in Experimental Psychology from Morgan State University, and a Master’s Degree in Developmental Psychology from Montclair State University, respectively. He also was a doctoral candidate in Environmental Psychology at the City University of New York. In addition to his earned degrees, Mr. Cryor has been awarded three Honorary Doctorates. He is the recipient of numerous awards and honors–among them, The Baltimore Sun 2017 Business & Civic Hall of Fame, Morgan State University 2017 Alumnus of the Year, the Thurgood Marshall College Fund Award of Excellence, University of Maryland School of Medicine Deans Lifetime Achievement Award, The Fanny Jackson Coppin University Award, the Associated Black Charities Distinguished Service Award, the BWCC Hall of Fame, the Distinguished Leadership Award- Maryland Democratic Party, the MEAC Distinguished Alumni Award, and the Baltimore City College Hall of Fame.

As part of the celebration, Mr. Cryor was presented with gifts of recognition and made brief remarks following a standing ovation from the BOV.

“My service to the Board of Visitors has been one of the highlights of my professional career,” Mr. Cryor said. “It has been a privilege to work with such an outstanding team devoted to expanding healthcare and new discoveries here and around the world. Looking forward, the School of Medicine and the Board of Visitors are incredibly fortunate that Cynthia Egan has agreed to assume the leadership of the board. She is very accomplished in ways that will ensure the growth of the medical school and its mission to be one of the world’s most outstanding and respected medical resources,” he said. 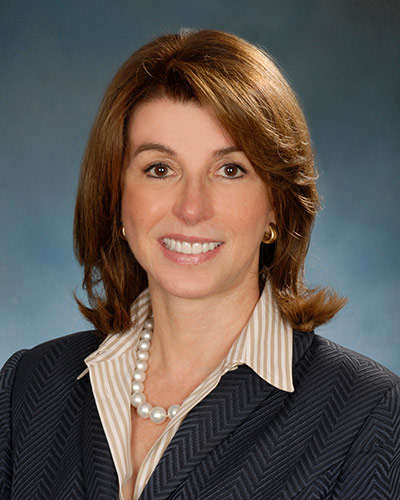 Ms. Egan, who has been an active member of the UMSOM Board since 2013, brings a range of new and unique perspectives to the BOV, combining strong leadership and corporate governance expertise with operations management experience in the financial services industry. She has successfully led complex investment, technology, and service businesses for both retail and institutional markets through start-up, dramatic growth, turnaround, and strategic redirection. She is currently a director of UNUM, where she chairs the Human Capital Committee and is a member of the Regulatory and Compliance Committee. She also is a director of the Hanover Group, where she chairs the Compensation Committee, and additionally a director to the BlackRock Fixed Income Fund complex where she chairs the Compliance committee and is a member of the Performance Committee. She has served as a Senior Advisor to the U.S. Treasury, specializing in domestic retirement security. She also has been a passionate leader in education and philanthropy, serving on the boards of Boston College, the Walters Art Museum, St. Paul’s School for Boys and the Employee Benefit Retirement Institute. She has created and led effective gender inclusion programs at both T. Rowe Price and Boston College, where she received her B.A. Degree. Since joining the BOV, she has been a lead member of the Board’s Visibility and Recognition Working Group.

“The UMSOM Board of Visitors is an impressive, dedicated group of men and women, and I am honored to be their chair and to follow in the formidable footsteps of Michael Cryor,” Ms. Egan said. “UMSOM is a great institution with a history of excellence in research, education, and patient care, and I couldn’t be more enthusiastic as the Board of Visitors works with Dean Reece, his team, and resources to advance the institution into the future.” 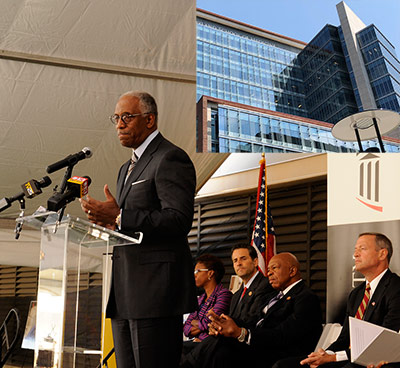 The new appointment comes at a time of strong forward momentum for the UMSOM. During Mr. Cryor’s tenure as Chair, working in partnership with Dean Reece, the UMSOM has seen a period of unprecedented growth and success.

During the past 10 years, the UMSOM has achieved new records across all of its mission areas:

In addition, the UMSOM constructed the new 450,000 square foot Health Sciences Research Facility III, the largest academic building in the entire University System of Maryland, with Mr. Cryor serving an instrumental role throughout that process.

A Tribute to Michael Cryor

At a special celebration of Michael Cryor at the recent meeting of the BOV, many members expressed their admiration and appreciation for his leadership as Chair.

“I want to express my appreciation for everything Michael has done for this board and for the School of Medicine,” said William E. “Brit” Kirwan, PhD, Chancellor Emeritus, University System of Maryland. “It has truly been an honor to serve on this board under his tremendous leadership.”

Kenneth Banks, President, Banks Contracting Company, Baltimore, MD added: “Michael has served as our Chair with grace, dignity, and integrity. We will forever be grateful for his service and sacrifice.”

Melvin Sharoky, MD, Past Chair, UMSOM Board of Visitors, Member and Former Chairman of the Board of Directors, Insmed, Royal Oak, MD, said, “Michael has truly raised the level of this board in every way.” Abba Poliakoff, Partner, Chairman of Securities Law Practice Group, Gordon Feinblatt, LLC, Baltimore, Maryland, referenced, “his ability to always achieve a consensus, while drawing out the individual talents of each board member.”

Alfred Berkeley, Chairman of Princeton Capital Management Group, Baltimore, MD, added, “Michael Cryor is a remarkable man who has made remarkable, positive contributions to the School of Medicine.”

Ms. Egan summarized the thoughts of many of the members at the celebration:

“Michael is someone who genuinely gives of himself, which is shown in so many ways -- in his love for Baltimore and his commitment to diversity. We have all experienced his wonderful leadership over the years. Recently, I have been personally touched by his generosity of spirit and time and his calm guidance, for which I am most grateful,” she said. 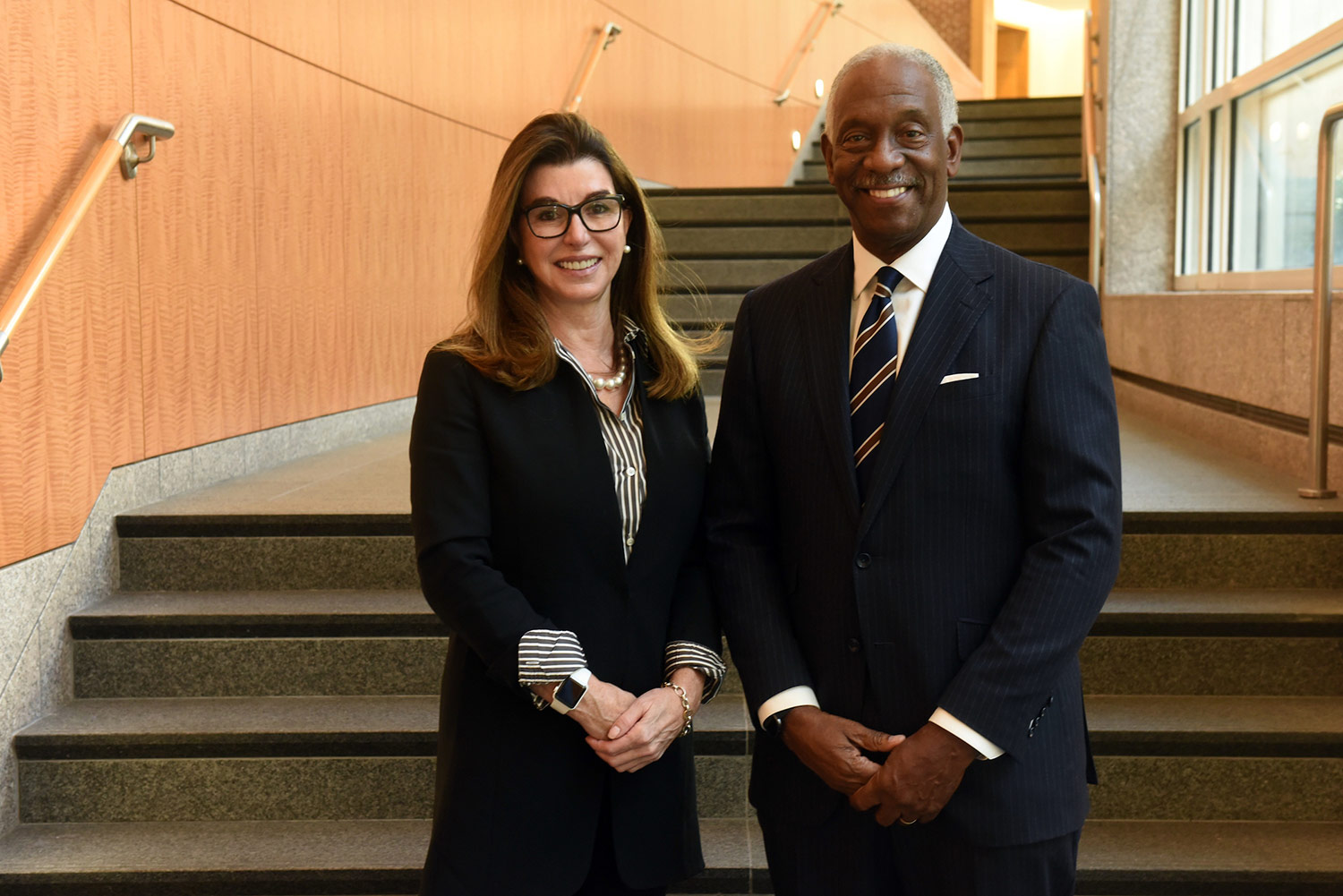 Current members of the UMSOM Board of Visitors (in alphabetical order) include: 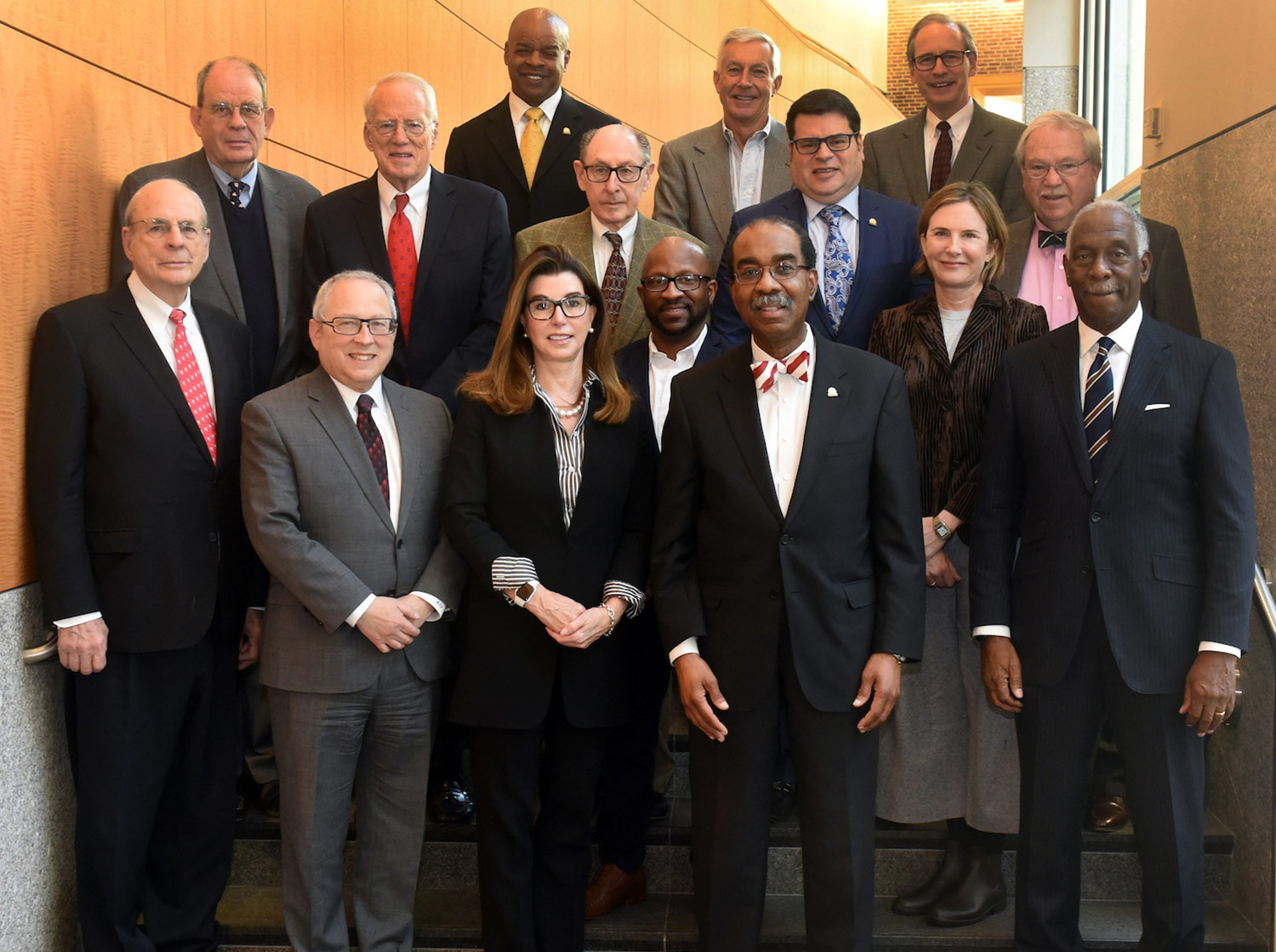 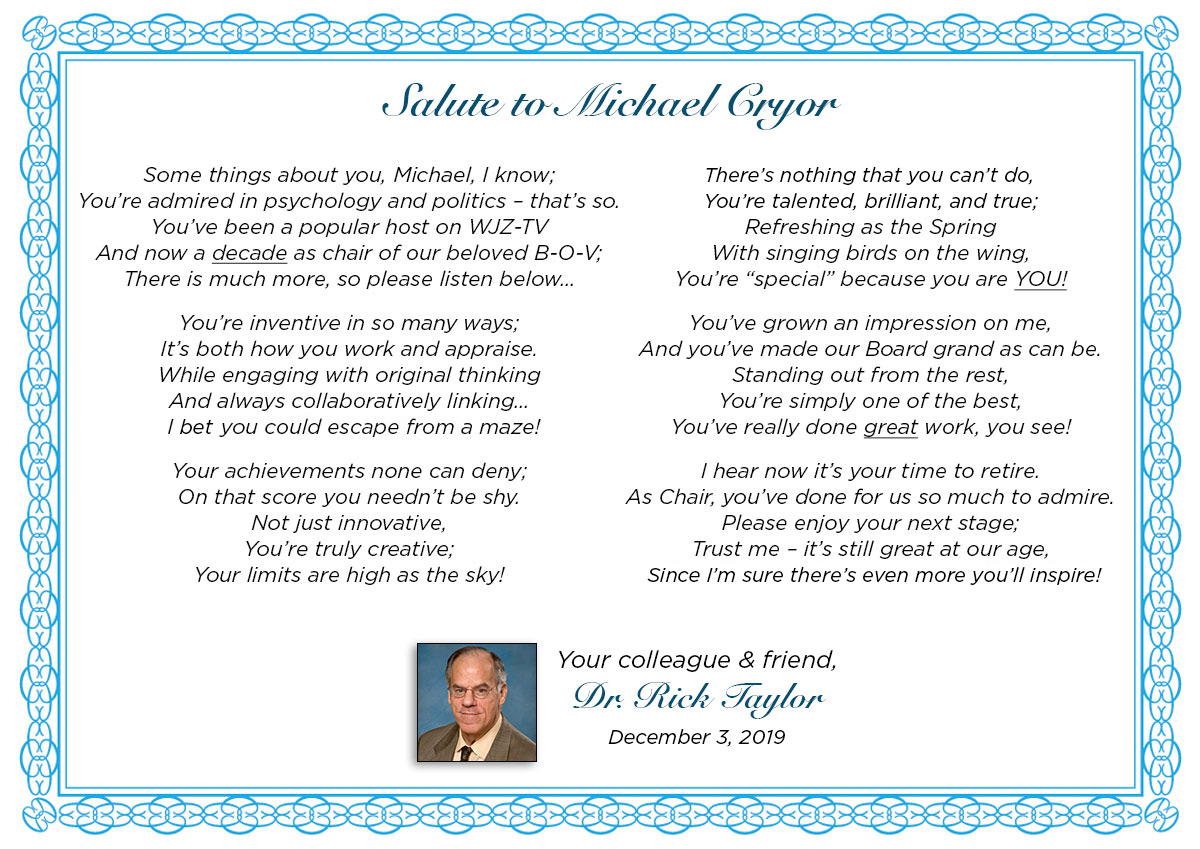 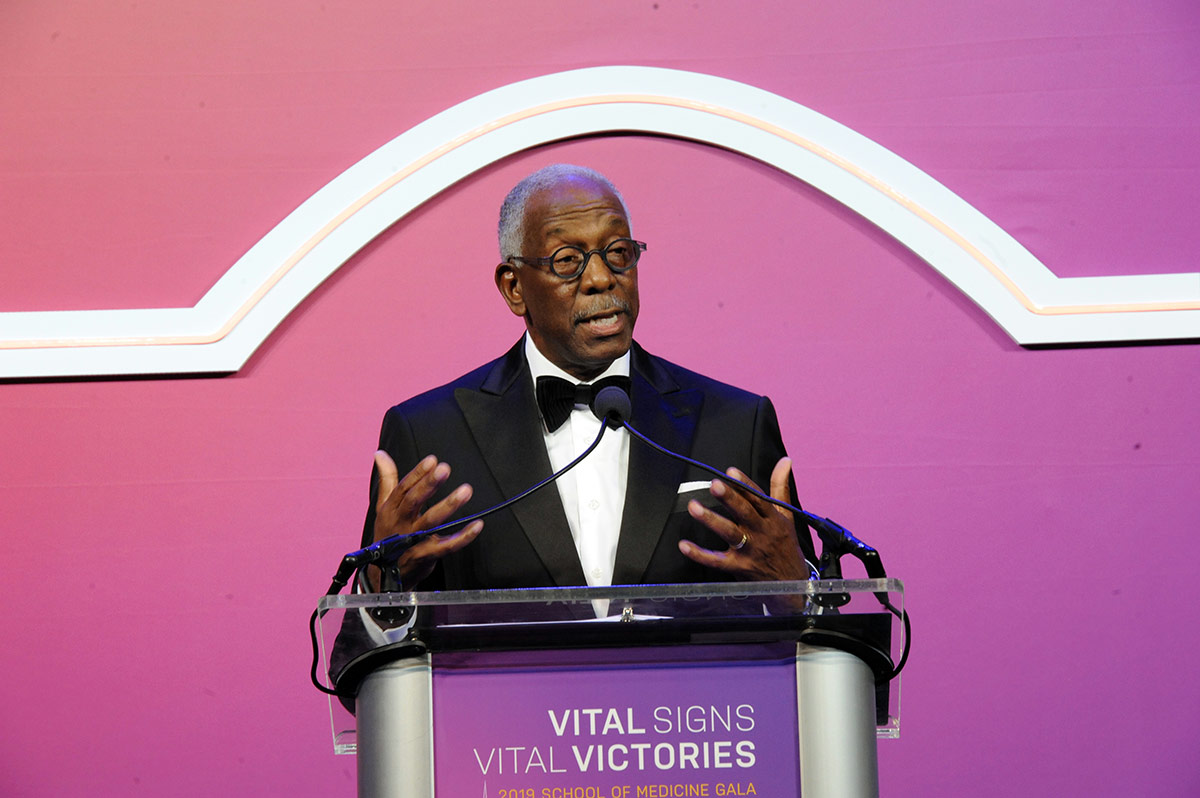 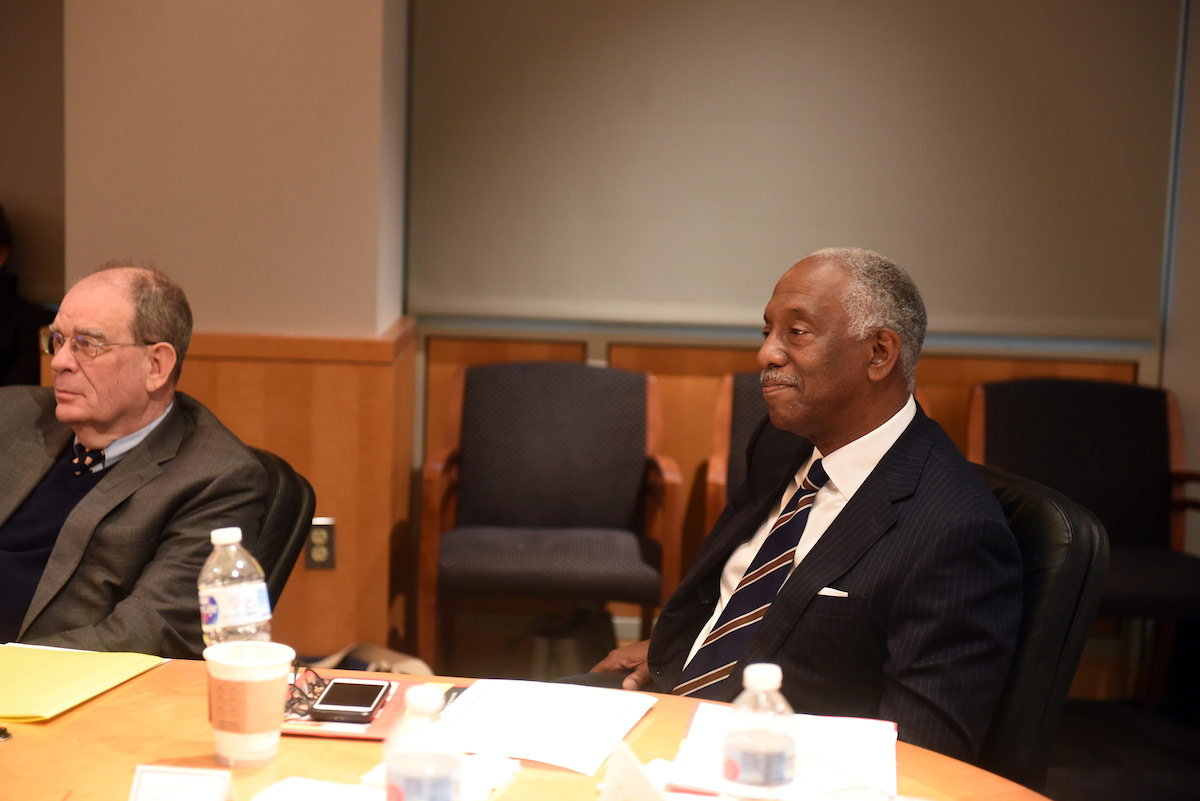 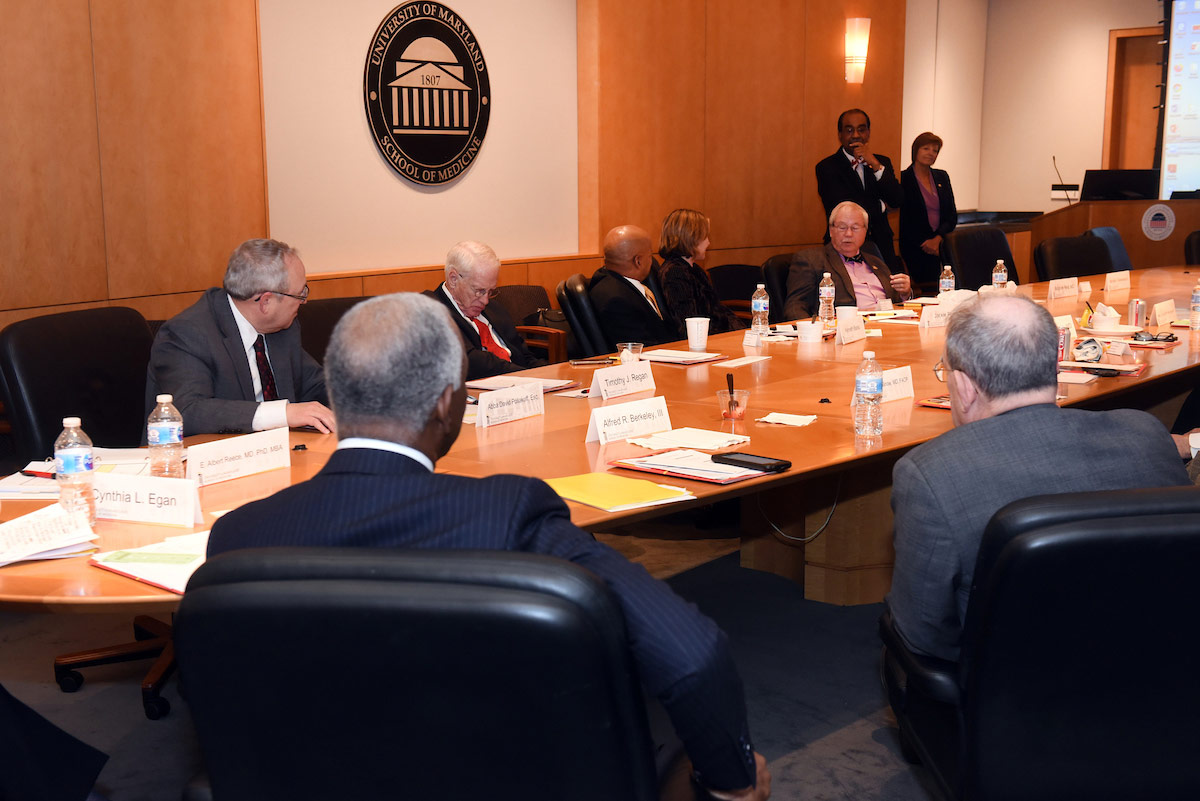 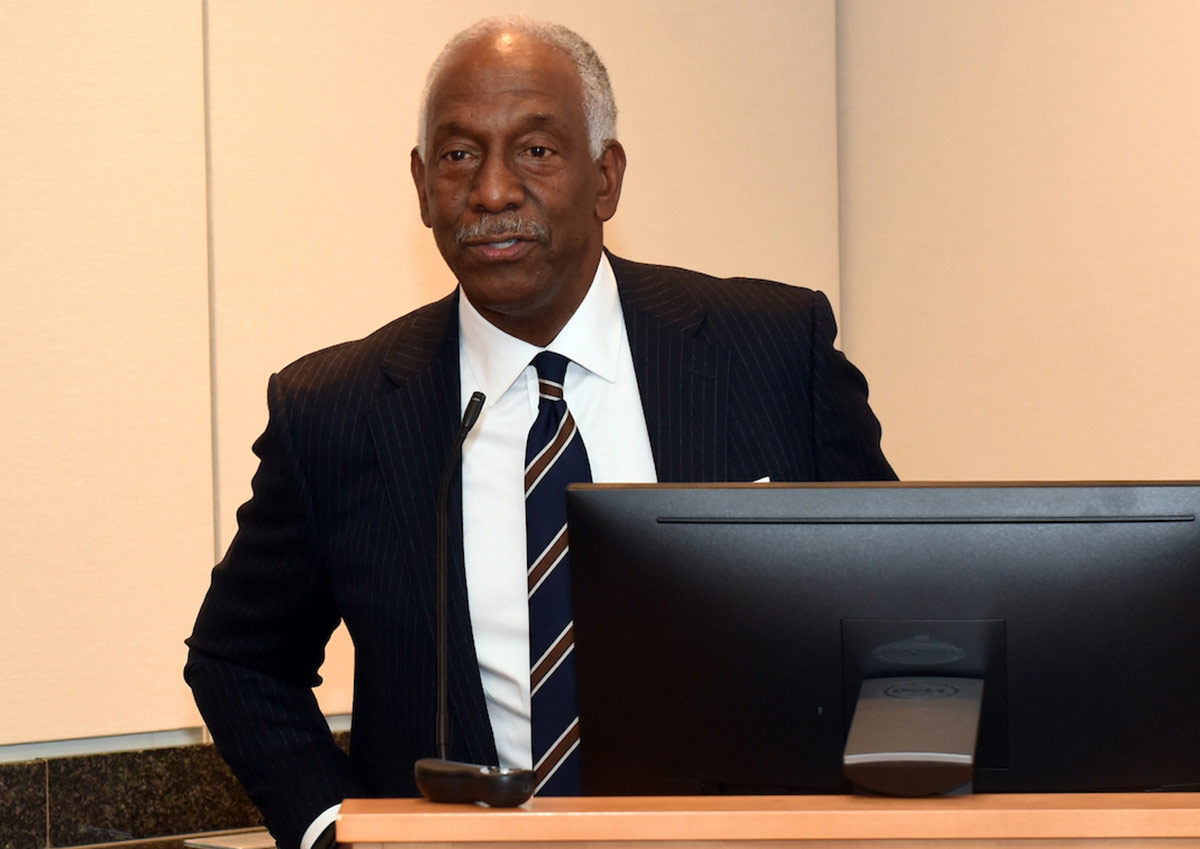 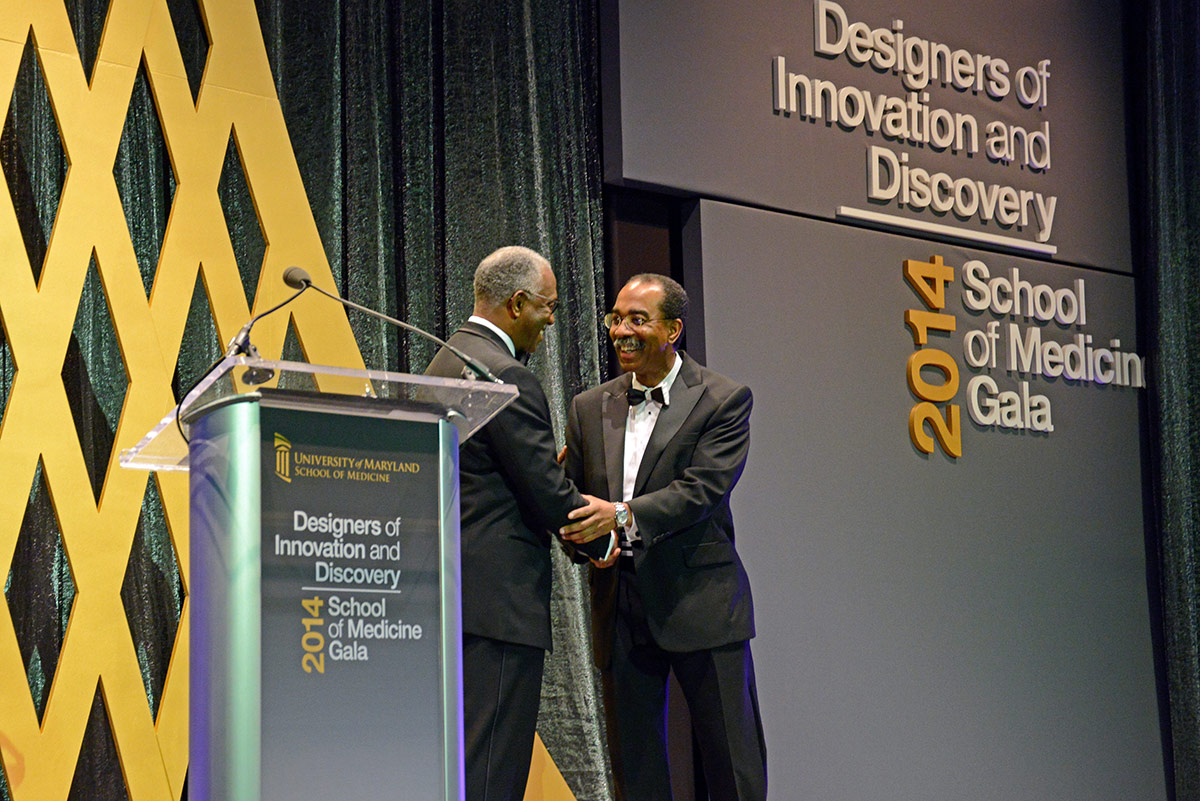 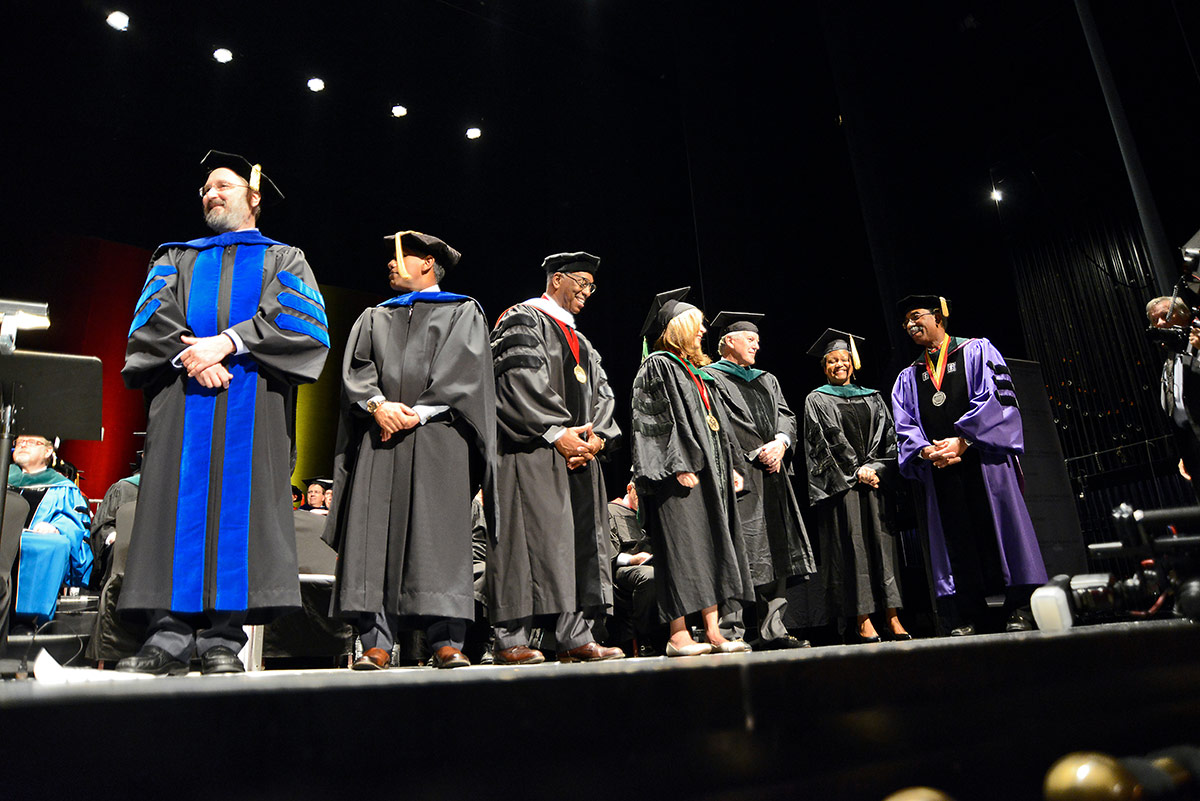 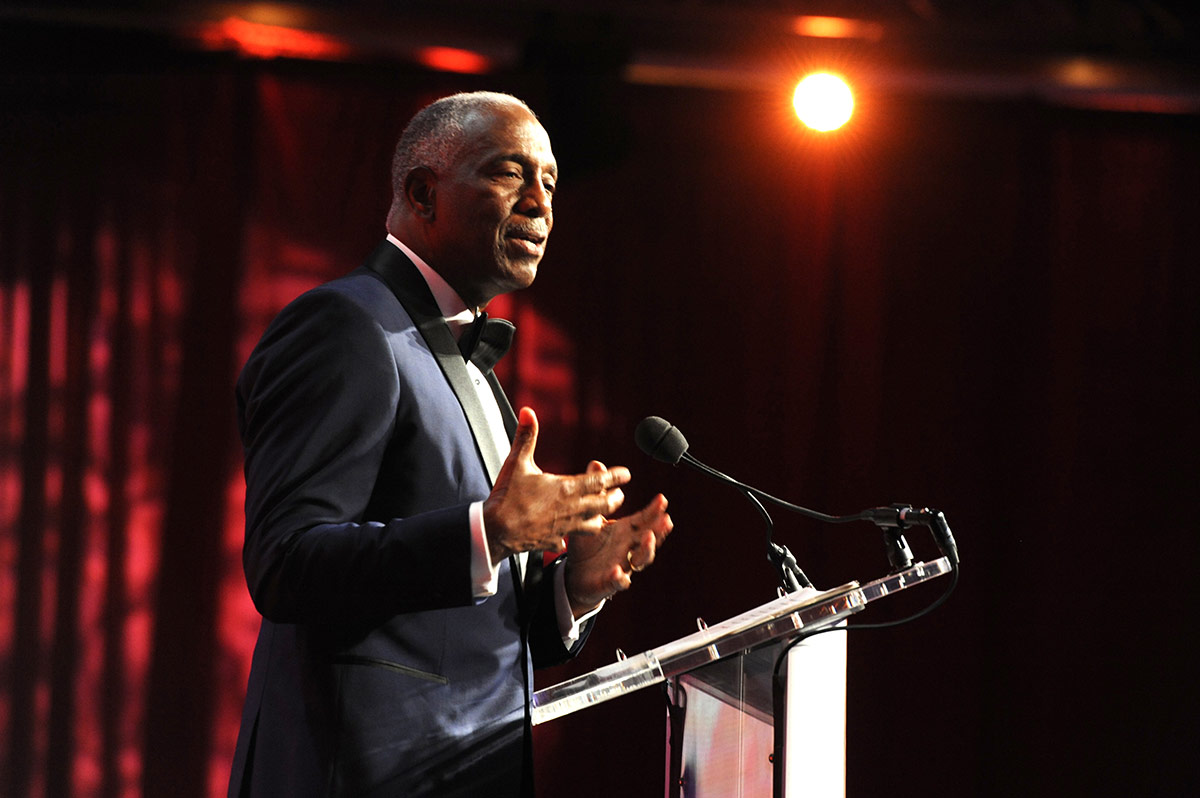 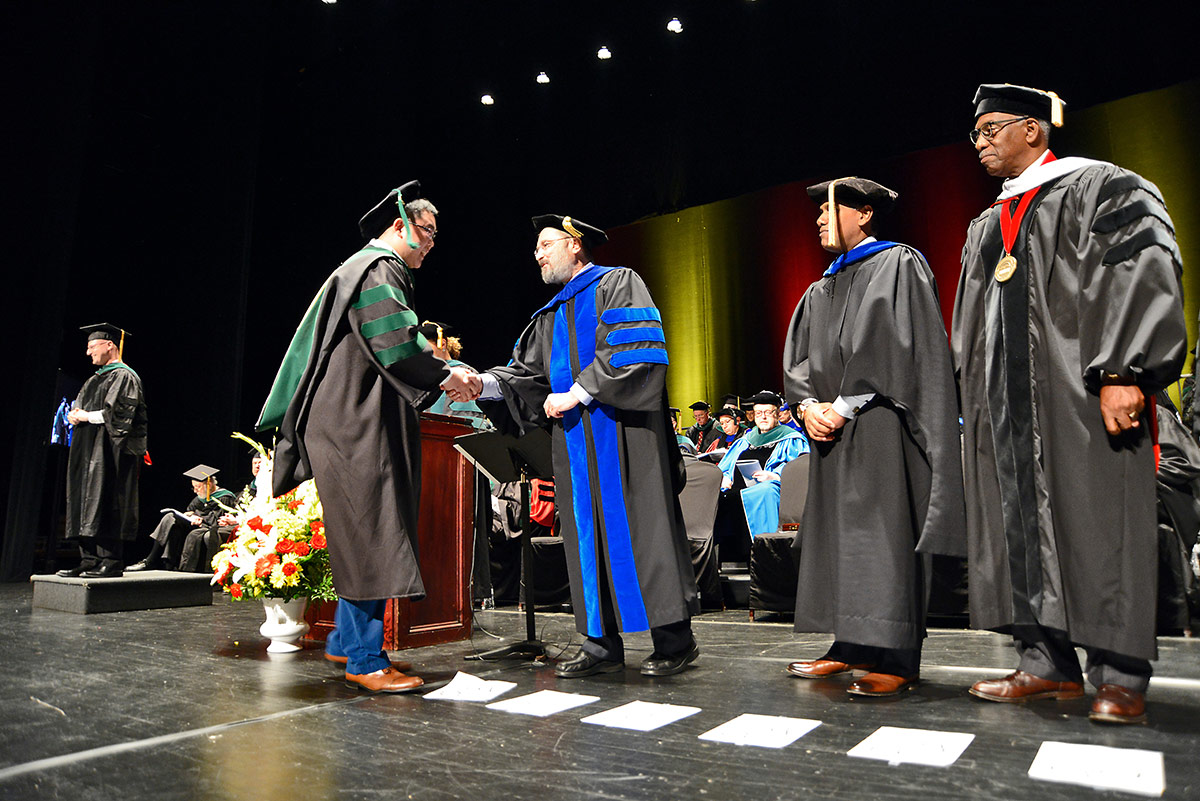 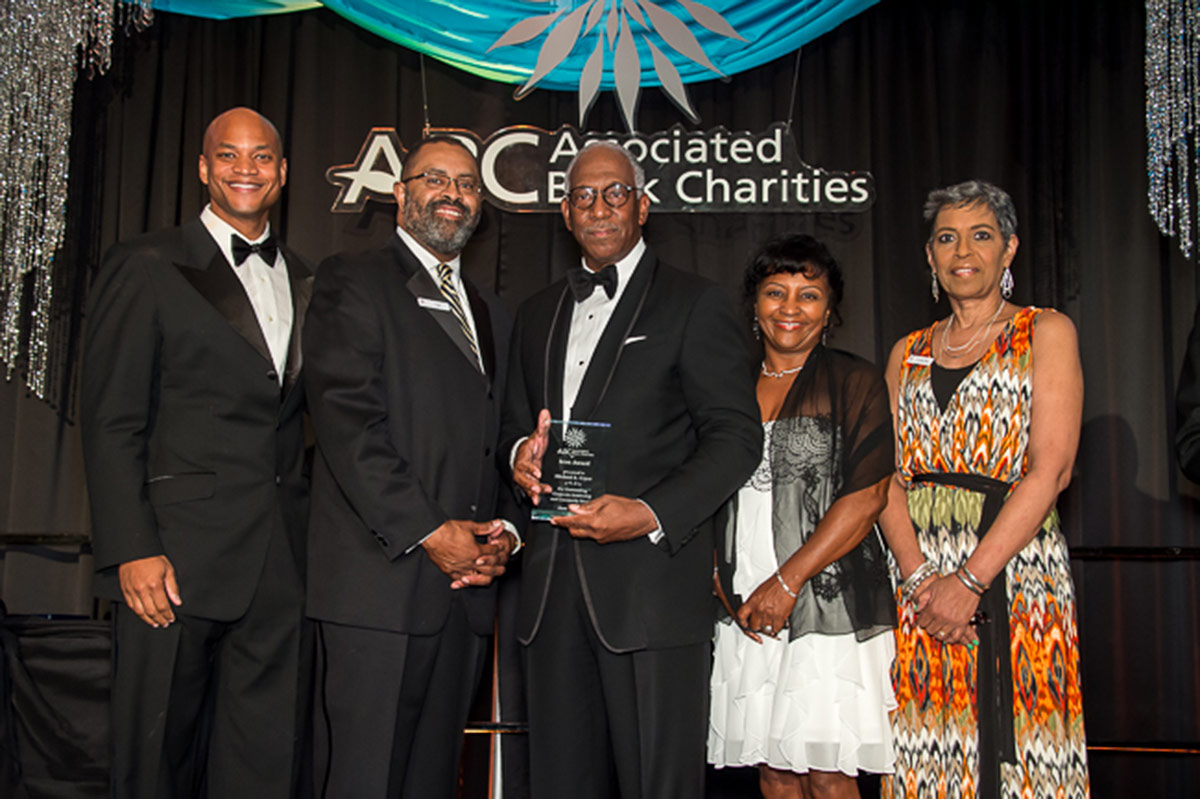 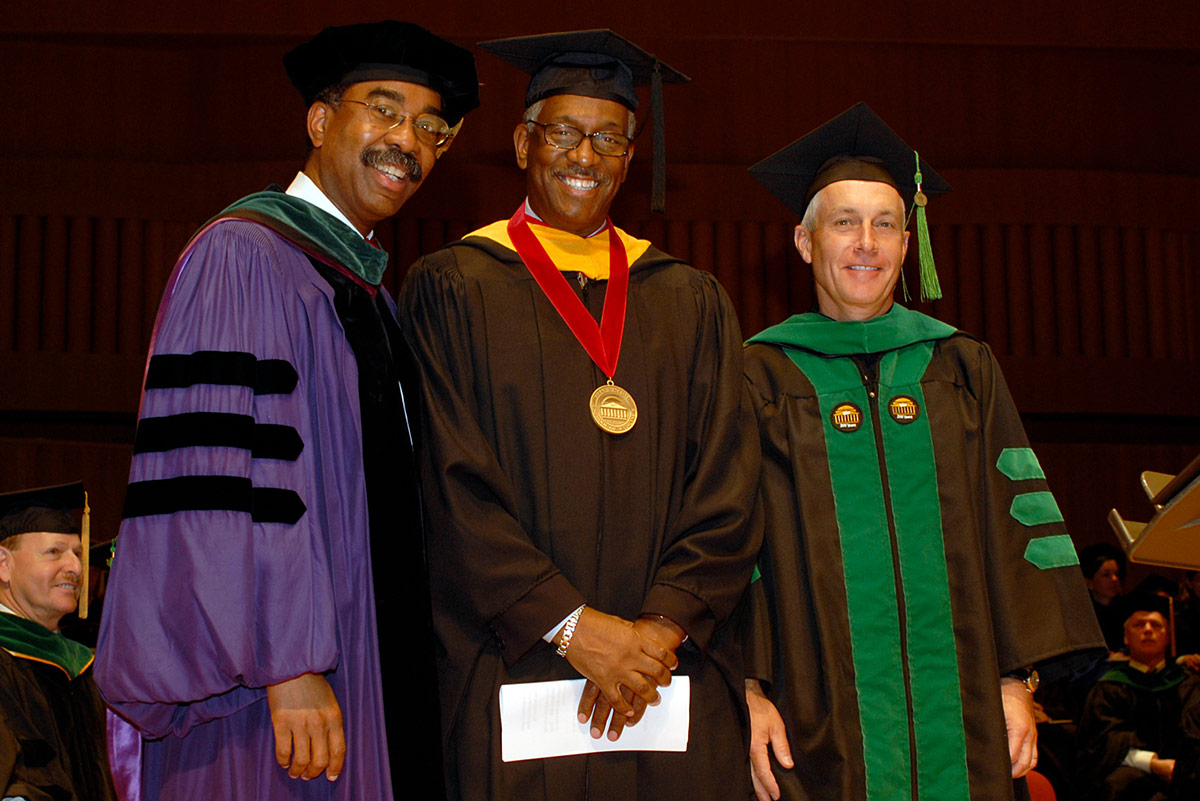 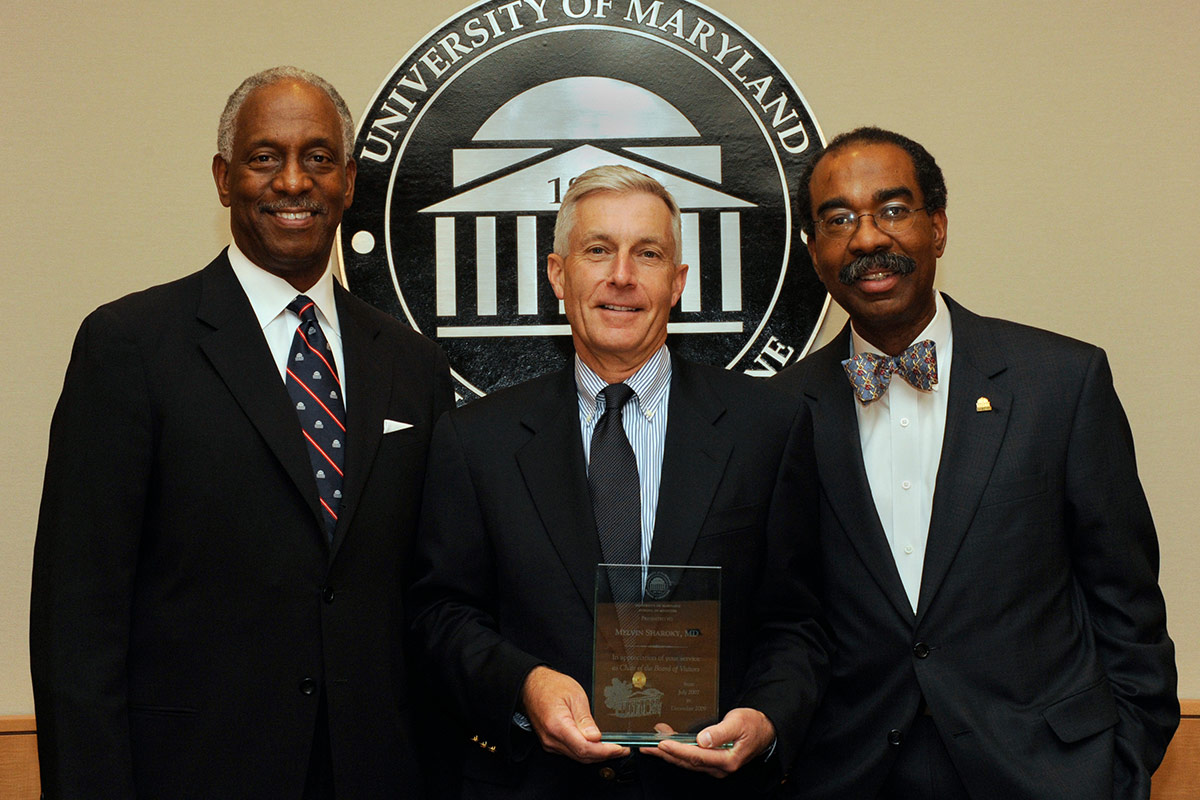 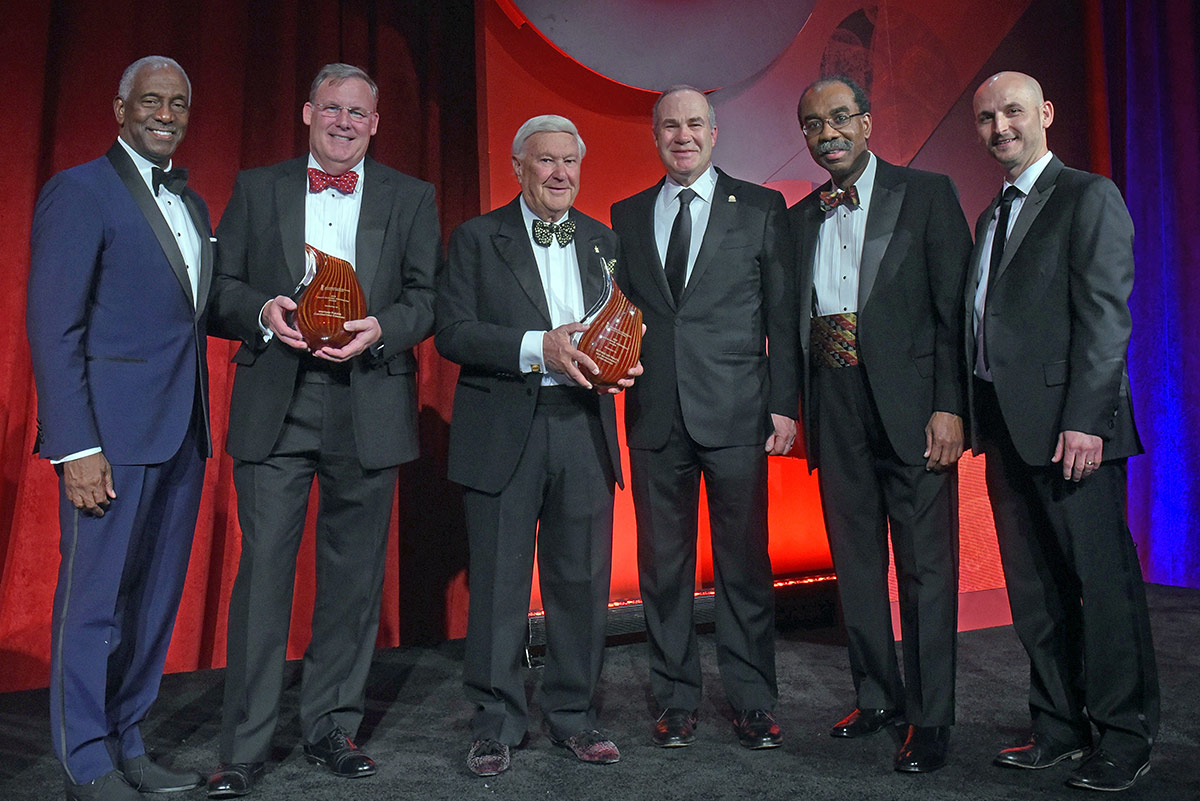 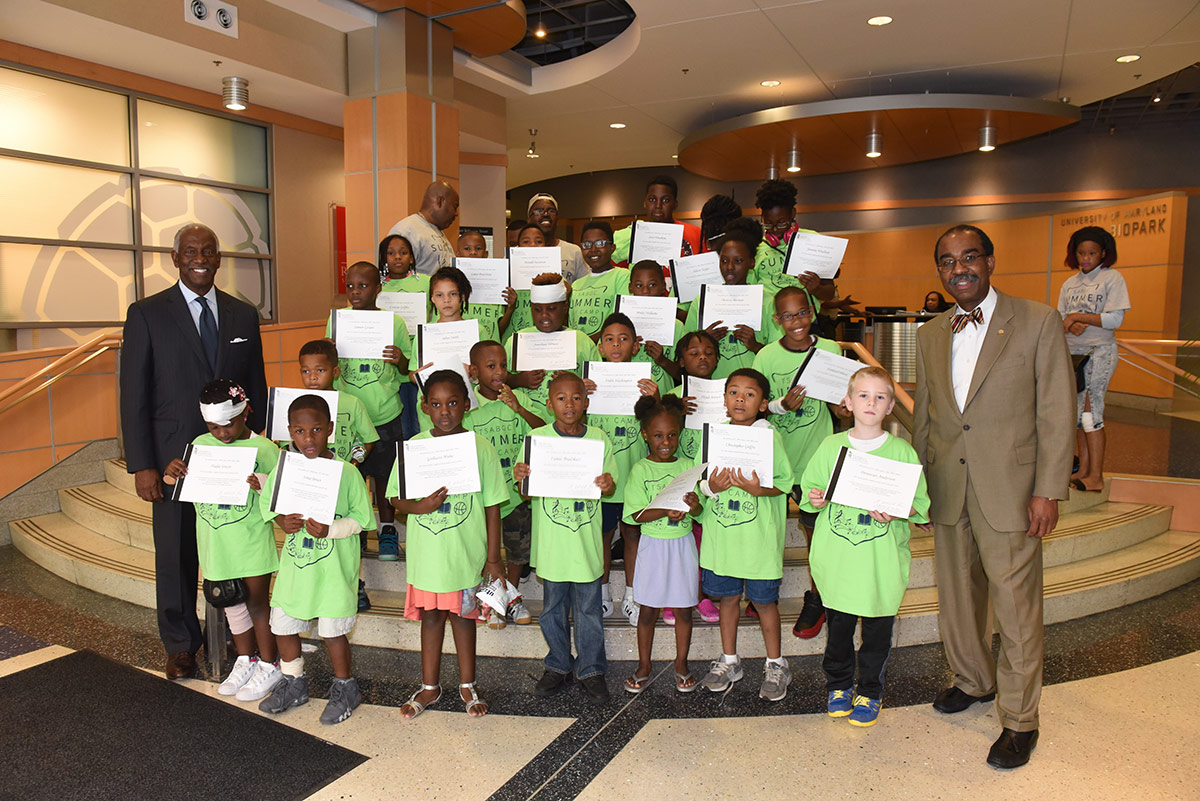 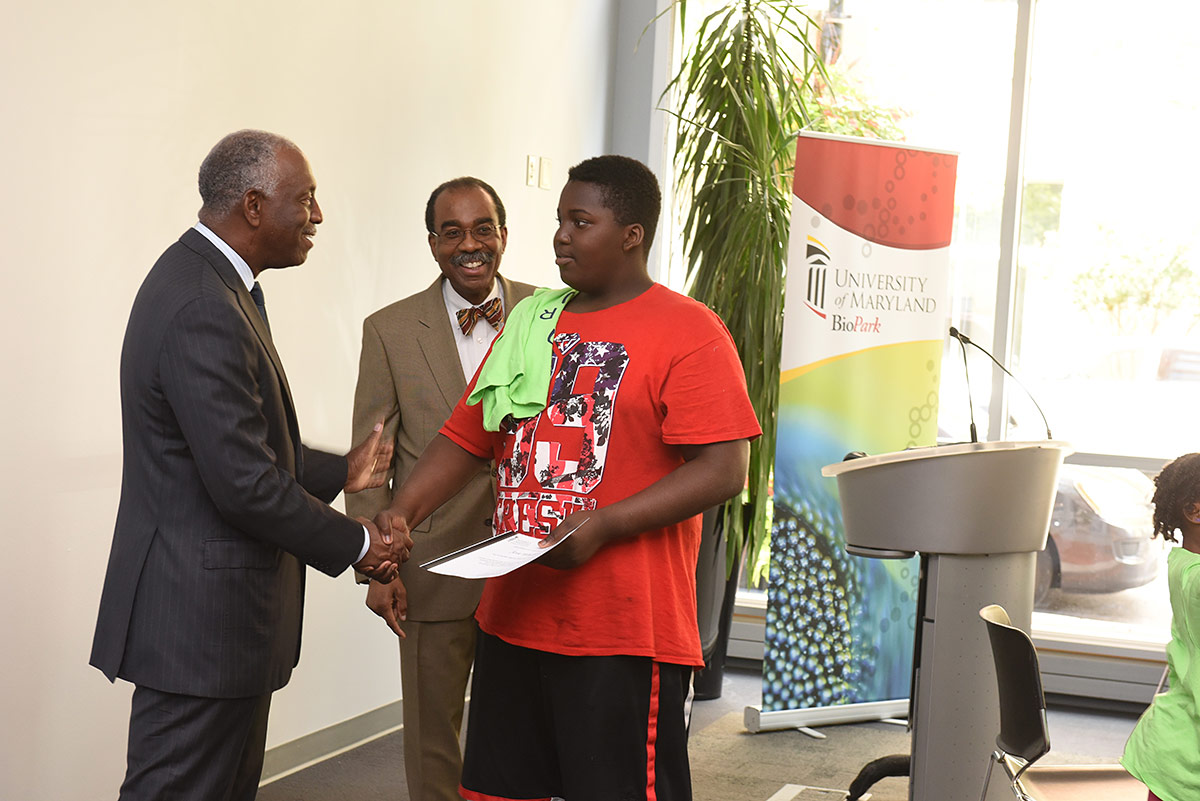 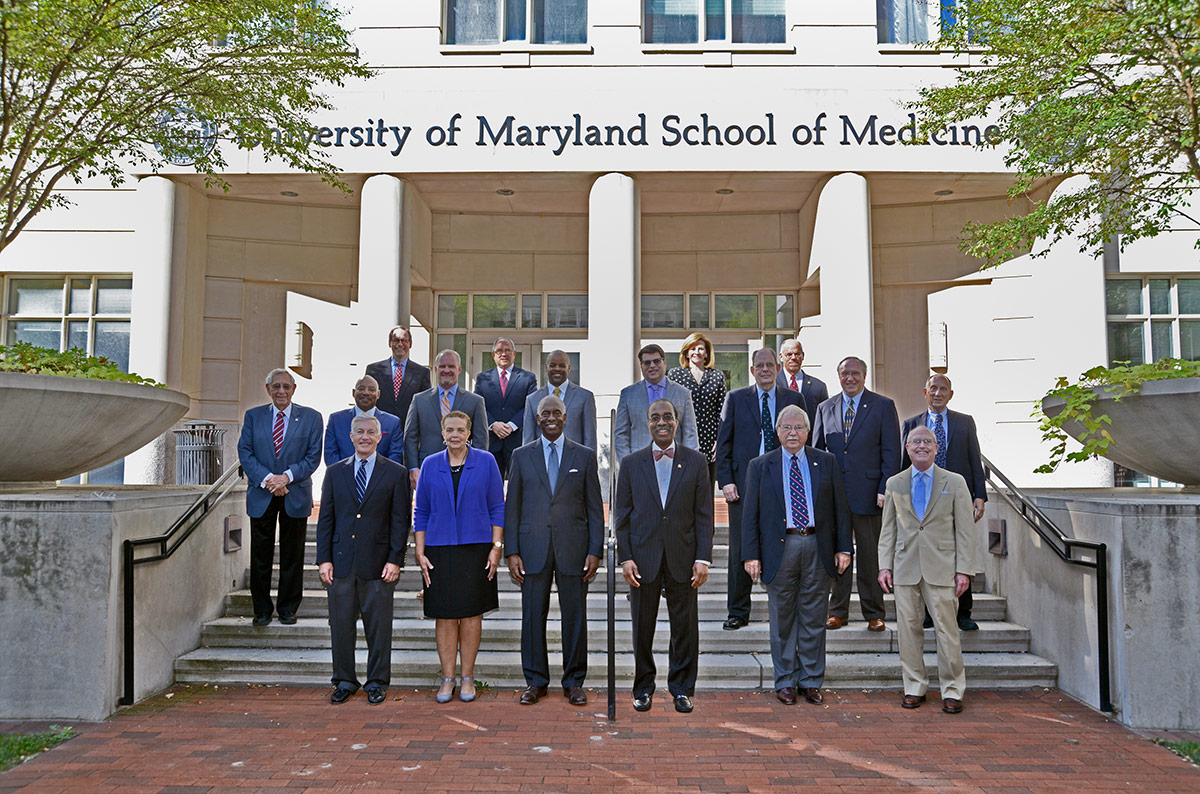 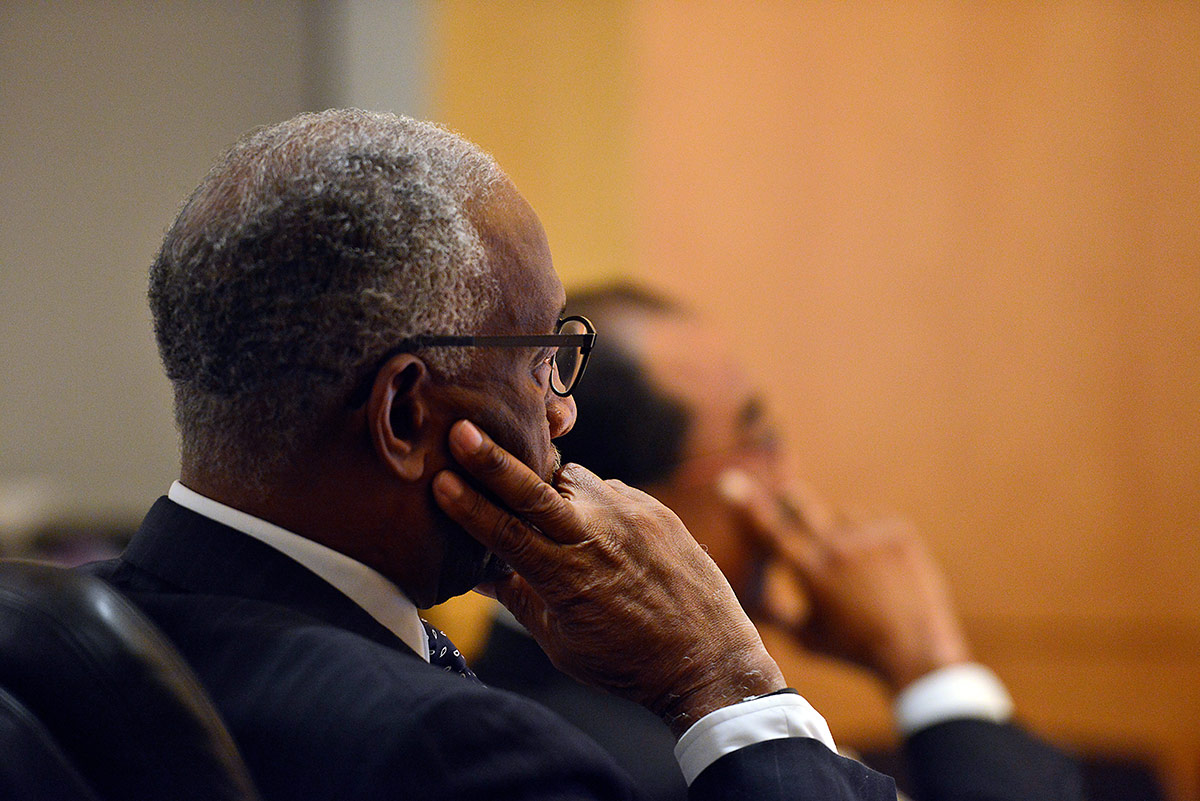