The University of Maryland School of Medicine (UMSOM) Department of Surgery and the Division of Vascular Surgery have launched a new clinical initiative designed to provide patients suffering from vascular problems faster access to care.

The goal of the new initiative, called “Tomorrow,” is to ensure that patients are seen within one day and that the Division of Vascular Surgery at the University of Maryland is considered the first choice for the patient with any potential vascular problem. The next day appointment is now possible as a result of the recent opening of the Office-Based Laboratory in the Maryland Vascular Center in the 419 Redwood Professional Building. 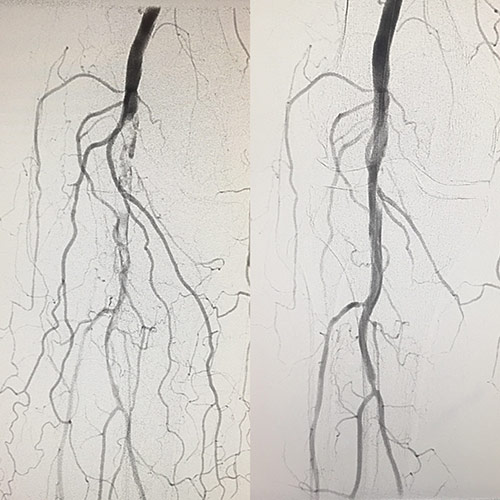 “We are excited to announce this program, which will offer any new patient with a vascular issue an appointment with a Board-Certified Faculty Vascular Surgeon within a day,” said Rajabrata Sarkar, MD, PhD, Barbara Baur Dunlap Professor in Surgery, Interim Chair for the Department of Surgery and Head of the Division of Vascular Surgery. “Patients and their families often cannot determine the severity and urgency of a possible vascular problem. Thus, the potential diagnosis of vascular disease can be frustrating and a cause for ongoing anxiety or concern,” said Dr. Sarkar added.

“It is critical that patients have quick access to the care they need, particularly as vascular problems can be life-threatening,” said E. Albert Reece, E. Albert Reece, MD, PhD, MBA, Executive Vice President for Medical Affairs, UM Baltimore, and the John Z. and Akiko K. Bowers Distinguished Professor, and Dean, University of Maryland School of Medicine. “This initiative is another good example of our commitment to providing excellence and efficiency in patient care to those who require more immediate attention.” 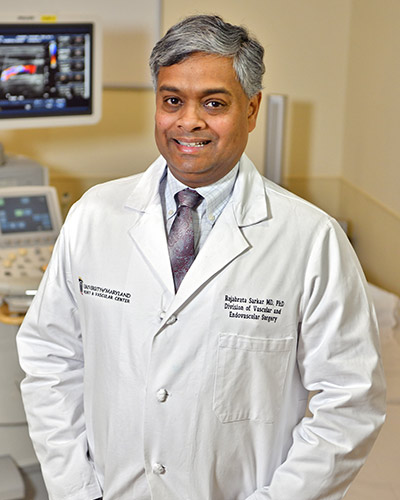 Now in its third century, the University of Maryland School of Medicine was chartered in 1807 as the first public medical school in the United States. It continues today as one of the fastest growing, top-tier biomedical research enterprises in the world -- with 43 academic departments, centers, institutes, and programs; and a faculty of more than 3,000 physicians, scientists, and allied health professionals, including members of the National Academy of Medicine and the National Academy of Sciences, and a distinguished recipient of the Albert E. Laser Award in Medical Research.  With an operating budget of more than $1 billion, the School of Medicine works closely in partnership with the University of Maryland Medical Center and Medical System to provide research-intensive, academic and clinically based care for more than 1.2 million patients each year. The School has over 2,500 students, residents, and fellows, and more than $530 million in extramural funding, with most of its academic departments highly ranked among all medical schools in the nation in research funding. As one of the seven professional schools that make up the University of Maryland, Baltimore campus, the School of Medicine has a total workforce of nearly 7,000 individuals. The combined School and Medical System (“University of Maryland Medicine”) has an annual budget of nearly $6 billion and an economic impact more than $15 billion on the state and local community. The School of Medicine faculty, which ranks as the 8th highest among public medical schools in research productivity, is an innovator in translational medicine, with 600 active patents and 24 start-up companies. The School works locally, nationally, and globally, with research and treatment facilities in 36 countries around the world. Visit medschool.umaryland.edu/