Dr. Kaper Recognized for His Distinguished Accomplishments in Interdisciplinary Research and Mentoring in Microbiology

Dr. Kaper is an internationally-recognized microbiologist with specific expertise in the molecular pathogenesis of diarrheal disease pathogens, specifically Vibrio cholerae and diarrheagenic Escherichia coli. He has constructed a number of live attenuated V. cholerae vaccine strains, which his long-time collaborator ­–Myron Levine, MD, MD, DTPH, the Simon and Bessie Grollman Distinguished Professor of Medicine and Associate Dean For Global Health, Vaccinology and Infectious Diseases ­–tested in numerous volunteer and field trials for clinical safety and efficacy. One vaccine, Vaxchora, was approved for licensure by the Food and Drug Administration (FDA) in 2016.

Since joining the UMSOM faculty in 1981, Dr. Kaper has trained more than 60 graduate students and postdoctoral fellows in the area of enteric pathogenesis, many of whom now hold leadership positions in preeminent academic institutions such as Harvard, University of Texas Southwestern, University of Michigan and University of Virginia . In addition to his roles as scientist and department chair, Dr. Kaper is also an academic leader in the School of Medicine, serving as Vice Dean for Academic Affairs, where he oversees all of the School’s academic programs.

“This is well-deserved recognition for Dr. Kaper, who is an expert in the molecular pathogenesis of serious diseases impacting millions of people around the world. His role as Chairman of the Department of Microbiology and Immunology at the School of Medicine is critical in training the next generation of researchers,” said UMSOM Dean E. Albert Reece, MD, PhD, MBA, who is also the Executive Vice President for Medical Affairs, University of Maryland, and the John Z. and Akiko K. Bowers Distinguished Professor.”

The American Society for Microbiology is one of the largest single life science societies, composed of over 30,000 scientists and health professionals. ASM's mission is to promote and advance the microbial sciences. This award honors D.C. White, who was known for his interdisciplinary scientific approach and for being a dedicated and inspiring mentor. Dr. Kaper received this award at the 2019 ASM Annual Meeting (Microbe) in San Francisco in June.

Dr. Kaper, who has been continuously funded by the National Institutes of Health (HIH) since 1982, has served as the Principal Investigator of the NIH-funded “Immunity and Infection” training grant since 2007. Dr. Kaper comes from a long line of outstanding mentors including his PhD mentor Dr. Rita Colwell, former Director of the National Science Foundation, and his postdoctoral mentor, Dr. Stanley Falkow, winner of a Lasker Special Achievement Award for  research and mentoring contributions. 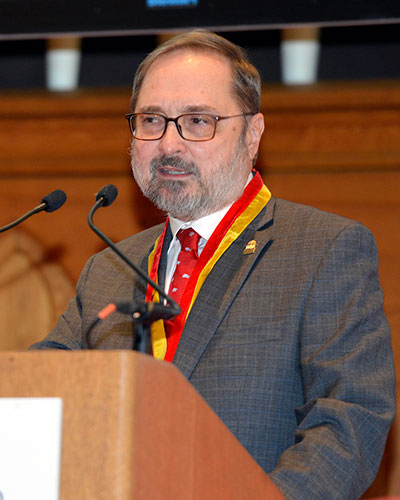 James B. Kaper, PhD, Professor and Chair of the Department of Microbiology & Immunology and Vice Dean for Academic Affairs, was invested as the James & Carolyn Frenkil Distinguished Dean’s Professor on January 10 before a packed audience at Westminster Hall. Surrounded by family, friends, past and present colleagues and distinguished scientists, Dr. Kaper joined the elite group of 82 SOM faculty who currently hold endowed professorships, the highest honor bestowed by the SOM on individual faculty members. 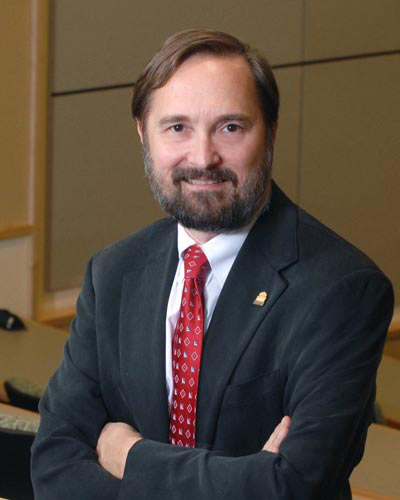