Over the course of their lives, about 80 percent of Americans will suffer from back pain at one time or another. A recent study found that more than a third of adults say that low back pain has affected their ability to perform the tasks of daily living, exercise, or sleep. Treating this pain remains a difficult problem, and for millions of people the pain is chronic.

Now, a new study by scientists at the University of Maryland School of Medicine (UM SOM) has concluded that yoga may be helpful for low back pain. The study appeared earlier this month in the online journal Cochrane Library.

“We found that the practice of yoga was linked to pain relief and improvement in function,” said the study’s lead author, L. Susan Wieland, PhD, MPH, Assistant Professor of Family & Community Medicine at UM SOM, and Coordinator of the Cochrane Complementary Medicine Field at the Center for Integrative Medicine at UM SOM – an NIH grant-funded project that performs systematic reviews of various integrative medicine topics. “For some patients suffering from chronic non-specific low back pain, yoga may be worth considering as a form of treatment.”

Wieland and her co-authors reviewed 12 separate studies looking at yoga for low back pain. The trials, which included more than 1,000 participants, compared yoga to a non-exercise intervention, such as educational material given to a patient, or to an exercise intervention such as physical therapy. The researchers found that there was low to moderate certainty evidence that at three and six months, patients using yoga had small to moderate improvements in back-related function, as well as small improvements in pain.

Yoga performed about the same as non-yoga exercise in terms of improving back function at three and six months, although the researchers found few studies comparing yoga to other exercise and therefore considered the evidence to be very low certainty.

Yoga is a physical and spiritual practice that originated more than 2,000 years ago in India. Over the past several decades, it has become increasingly popular in the U.S. and other western countries. It typically involves a combination of physical movements, controlled breathing, and relaxation or meditation.

Most of the trials used Iyengar, Hatha, or Viniyoga forms of the practice. Because all study participants knew whether or not they were practicing yoga, and their reporting of changes in pain and functioning could have been affected by this knowledge, the study outcomes could only be graded with “moderate” certainty at best. The study also found that patients using yoga had more adverse effects than patients who did not use exercise, but had similar rates of adverse effects as patients who used non-yoga exercise. The adverse effects were mostly increases in back pain. Yoga was not associated with serious side effects.

“This study is an important piece of the puzzle, a way to validate a technique that could have wide use,” said UM SOM Dean E. Albert Reece, MD, PhD, MBA, who is also the vice president for Medical Affairs, University of Maryland, and the John Z. and Akiko K. Bowers Distinguished Professor. “Low back pain is a major source of disability for millions, and it appears that integrative medicine can play a role in helping to relieve this and other sources of chronic pain.”

About the Center for Integrative Medicine:

The Center for Integrative Medicine (CIM) at the University of Maryland School of Medicine was the first academic integrative medicine center in the US. With a track record of over $50 million in grant funding, more than 650 peer-reviewed publications and abstracts, and collaborators in more than 120 different countries, CIM continues to be a leading international center for research, patient care, education and training in integrative medicine. Emphasizing an approach to healing that values mind, body, and spirit, the Center is committed to evaluating the scientific foundation of complementary medicine, educating health professionals and the public about integrative medicine and integrating evidence-based complementary therapies into clinical care to help people achieve and maintain optimal health and wellbeing. For more information on CIM, visit: www.cim.umaryland.edu. 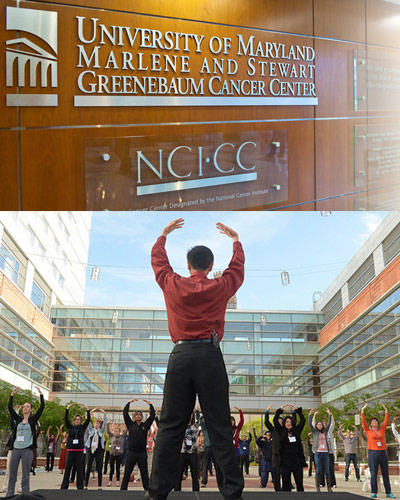 Kevin Cullen, MD, Director of the University of Maryland Marlene and Stewart Greenebaum Comprehensive Cancer Center (UMGCCC), and University of Maryland School of Medicine (UMSOM) Dean E. Albert Reece, MD, PhD, MBA, have announced that the UMSOM Center for Integrative Medicine has merged with the Cancer Center in order to increase cancer patients’ access to a number of complementary therapies and initiatives including yoga therapy, acupuncture, and massage therapy to help improve their symptoms, psychological outlook, and overall quality of life.