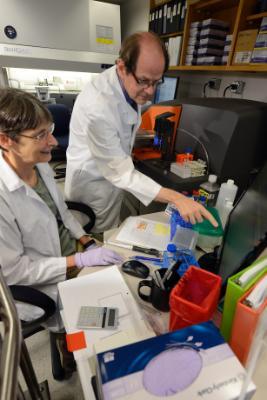 ‌Enteric infections are endemic and epidemic infectious diseases that still afflict major populations around the world, particularly in developing nations, and also pose risks for US travelers (including deployed military personnel). Vaccines are widely viewed as cost-effective interventions to prevent and control endemic and epidemic infections.  In spite of the need to develop new or improved vaccines against enteric pathogens of great public health importance, their development has been impeded by fragmentary understanding of the immunological mechanisms operational systemically and in the complex environment of the gastrointestinal tract.

Overarching hypothesis: Delicate homeostasis of effector and regulatory immunological mechanisms elicited systemically and in the gut mucosa, and the interplay with the resident gut microbiota, play a critical role in protection from typhoid fever in humans.

The CCHI has a unique pool of resources, including specimens collected during ground-breaking clinical trials involving the challenge of volunteers with wild-type S. Typhi before or following immunization with attenuated S. Typhi vaccines (e.g., FDA licensed Ty21a typhoid vaccine). There is increasing evidence that the normal microbiota plays a major role in the induction of host’s immune responses. In addition to sophisticated mechanistic immunological studies, we have dramatically expanded CCHI pioneering studies on the interactions between host immune responses and gut microbiota in humans. Our state-of-the-art sophisticated in vitro organotypic models of the human intestinal mucosa and mucosal biopsy explants are used to study the initial interactions between S. Typhi and the host, including innate immunity and physiological consequences. Teh CCHI performs studies in children, who are primarily affected by typhoid fever, but for whom virtually no information is available on the protective immunity elicited by Ty21a immunization.