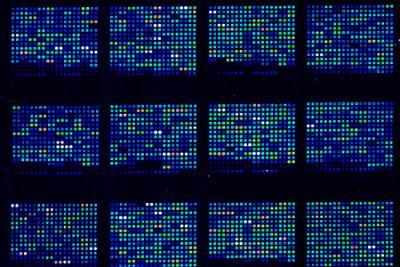 The extensive diversity in malaria surface proteins has been a key hurdle in developing a vaccine.While most studies focus on the antibody responses to antigens from laboratory strains that are convenient to grow and already well characterized, University of Maryland School of Medicine researchers are focusing on understanding how the diversity of malaria parasites  in real-life infections impact responses to vaccines and the natural acquisition of immunity Using high-throughput protein microarrays that contain whole proteins and large conformational protein fragments of field-derived diverse variants of key P. falciparum antigens, researchers have observed that sera from children recognize increasing numbers of variants of key P. falciparum antigens over the course of a malaria season, resulting in a clear pattern of acquired immunity.

In related work, researchers are studying the antibody responses to wild strains of malaria using ultra-dense peptide microarrays. While most children in sub-Saharan Africa develop natural immunity to cerebral malaria, this protection is believed to be associated with the immune system gradually recognizing critical portions (called “epitopes”) of particular malaria parasite proteins that are found on the surface of infected red blood cells and specifically bind to brain vasculature.  With the dense peptide microarray, researchers are working to identify a set of epitopes from surface proteins that are critical to the development of natural immunity to cerebral malaria.

This research combines novel genomic approaches with powerful new microarray technology to measure the association between the risk of cerebral malaria and the presence of antibodies to these parasite surface antigens, providing insight into the mechanisms underlying the development of life-threatening cerebral malaria as well as less severe forms of the disease. Thousands of peptides (small protein fragments) will be printed onto microarray chips that will then be exposed to sera from children to study antibody interactions with all of these peptides at once.  It will help to determine potential critical peptides that could be a target for the development of a vaccine against cerebral malaria. Our approach will also identify targets for future interventions, such as vaccines and drugs, that can can interrupt the pathway of malaria pathogenesis and prevent disease.