Genomic DNA, purified from peripheral blood, was used in direct sequencing assays to screen for mutations in the nephrin and podocin genes (NPHS1 and NPHS2), and in the COQ2 and PDSS2 genes (Diomedi-Camassei et al, 2007). This lead to discovery of the patient carrying a homozygous c.437G3A (p.Ser146Asn) mutation in COQ2. Both parents were found to be heterozygous for the COQ2-S146N variant. Furthermore, this new mutation was not detected in 500 control chromosomes.

We first examined the nephrocyte-specific silencing of the fly homologous gene Coq2 (Dot-Gal4;UAS-Coq2-RNAi) and found that Coq2 silencing significantly reduced nephrocyte function (Figure 1), providing gene-level validation for the human COQ2 gene in renal function. We then generated two UAS-based transgenic fly lines, one for the reference human COQ2 gene (Dot-Gal4;UAS-Coq2-RNAi;UAS-COQ2 transgenic flies) and one for the patient-specific allele COQ2-S146N (Dot-Gal4;UAS-Coq2-RNAi;UAS-COQ2(S146N) transgenic flies), generated using our gene replacement strategy. We found that the reference, but not the patient, allele was able to rescue the nephrocyte functional defect caused by Coq2-IR (Figure 1). Thereby, providing variant-level validation for the COQ2-S146N variant and established its kidney disease causal association.

The COQ2 gene encodes an enzyme in the Coenzyme Q10 pathway with Co-Q10 (Q10) as the final product.
Conveniently, Q10 is readily available as an over-the-counter dietary supplement, which motivated us to test Co-Q10 as a therapeutic strategy to treat patient with COQ2-renal disease. Indeed, supplementing the diet of Coq2-RNAi (Coq2-IR) flies with 5% Q10 rescued the nephrocyte functional phenotype (normal levels of ANF-RFP uptake by the nephrocytes), while we observed no differences in ANF-RFP uptake in wild-type controls flies that received supplemental Q10 in their diet (Figure 1, A and B). Furthermore, we showed that dietary treatment of 5% Co-Q10 largely restored normal slit diaphragm and lacunar channel morphology (Figure 2, C, D and E) and rescued the nephrocyte functional defect evident by reduced ROS levels in Coq2-IR nephrocytes after 5% Co-Q10 treatment (Figure 2, F and G). Moreover, Co-Q10 treatment also rescued the reduced lifespan of this personalized fly model (Figure 2). 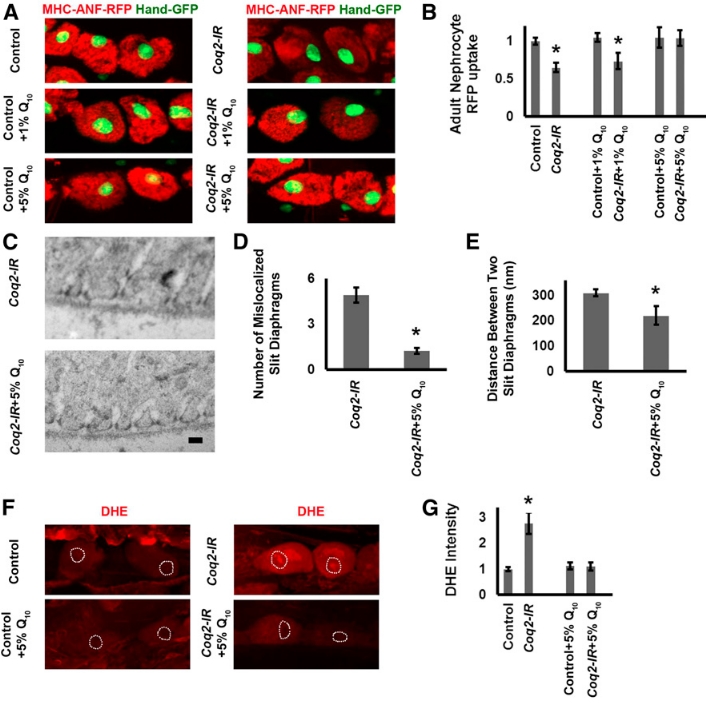 Our findings thus demonstrate that a patient derived mutation contributing to the development of a specific glomerular disease can be introduced into our Drosophila model, in effect creating a personalized approach to investigate the pathogenesis and even treatment of specific renal diseases in vivo.