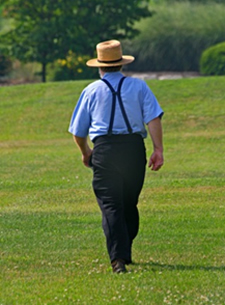 The Amish are an Anabaptist Christian denomination formed in 1693 in Switzerland.  As Anabaptists, the Amish believe in adult baptism and live their lives according to their strong commitment to family, community and God. Today, modern day Amish live primarily in rural communities in North America and are famous for their plain dress and limited use of technology. Amish communities have largely retained their unique sociocultural identity.

The Old Order Amish (OOA) population of Lancaster County, PA immigrated to the United States from Western Europe in the late 1700’s. There are now approximately 35,000 OOA individuals in the Lancaster area, nearly all of whom can trace their ancestry back 12-14 generations to a small number of founder families.

The Amish and the UM School of Medicine

The Division of Endocrinology, Diabetes and Nutrition and the University of Maryland School of Medicine has been studying the genetics of metabolic and cardiovascular health in the OOA since 1995. During this time the Amish studies have been supported by numerous research grants, and results from these studies have been described in many scientific publications.

The Amish community is ideal for studies due to its common lineage and homogeneous lifestyle that makes isolating genes easier for scientists. "It's been absolutely essential that the Amish are partners in our research," says Dr. Alan Shuldiner, the clinic's founder and director of the genetics and genomic medicine program at the University of Maryland, School of Medicine. "The community has rallied behind the research."

The clinic's research has discovered genes playing a role in increasing the risk of Type 2 diabetes and heart disease, as well as a gene that plays a role in determining why some people don't respond to the anti­clotting medicine Plavix. One clinic study showed how high levels of activity can help to counteract a gene that normally causes people to gain weight. Another study showed a gene that appears to influence people's risk of developing high blood pressure.

The next step will be connecting the clinic's research to the average patient who goes to the doctor for treatment of high blood pressure, diabetes or another common problem. That is on the horizon, Shuldiner says. "We want to find genes so we can personalize medicine," he says. "We can design individualized treatment plans, with diet and drugs. "Within our lifetime, it will happen. The field is developing at an incredibly rapid pace."

One of the remarkable things about the clinic is that its highly scientific work is conducted via a very human outreach effort. Clinic nurses, accompanied by local Amish women who know the community, recruit people for studies by driving down farm lanes, knocking on doors and asking for their help. At kitchen tables, they gather information and sometimes blood samples.

"It is altruistic,"Shuldiner says of the Amish community's help. "They believe in voluntarily helping fellow Amish and non­-Amish." All of this was begun by a soft ­spoken doctor whose first connection here was a childhood vacation, when his family stayed at a local hotel and ate at Good 'N Plenty Restaurant. By the early '90s, Shuldiner was a new University of Maryland faculty member interested in Type 2 diabetes. At that time, the Amish were already known for being good subjects for genetic studies. Shuldiner did an initial diabetes study, via word­ of ­mouth and door ­to ­door connections made through an Intercourse Amish woman.

In 1995, he opened the clinic, first housing it in the Clinic for Special Children in Strasburg, which cares for and studies genetic disorders common to Amish and Old Order Mennonite children.  Shuldiner says he's learned more than just genetic information from the local Amish community, which numbers about 35,000. "Their sense of family and community is really a big deal," he says. "There is almost nothing they can't do, no problem is too large, in how they come together and help each other." And now, they are helping to lay a genetic groundwork that will help their community and others down the road, he says. "We are here to help them and they are here to help mankind," Shuldiner says.