Chronic microglial activation is considered to be the most damaging response of microglia to injury. Damage associated molecular pattern molecules (DAMPs) released by injured neurons after traumatic brain injury (TBI) interact with Toll like receptors and other and other pattern recognition receptors on activated microglia and trigger a vicious self-perpetuating cycle of damaging events that lead to prolonged and dysregulated microglial activation that drives pathogenic processes and neurodegeneration. Human and animal studies indicate that microglia are chronically activated for weeks, months and even years after TBI, and may contribute to chronic neurodegeneration and related neurological deficits following injury. Persistent long-term microglial activation has been demonstrated in animal models of TBI and is associated with increased expression of pro-inflammatory cytokines (e.g. IL-1, TNF). Notably, a recent clinical study utilizing the positron emission tomography ligand [11C](R)PK11195 to assess chronic microglial activation in moderately-severe TBI patients demonstrated increased binding bilaterally at sites distant from areas of focal injury, such as thalamus, up to 17 years post-injury, and correlated these changes with measures of cognitive dysfunction. Furthermore, post-mortem studies have also demonstrated increased microglial activation in the white matter of head-injury survivors up to 16 years after TBI. The experimental and clinical evidence now suggest that TBI should not be viewed as a static, acute neurodegenerative disorder. Instead, TBI initiates chronic biochemical processes leading to prolonged neuroinflammation and microglial activation. As such, there may be a longer therapeutic window for the treatment of head injury than traditionally accepted.

Microglia/macrophages remain highly activated in the injured cortex up to 12 months post-injury. 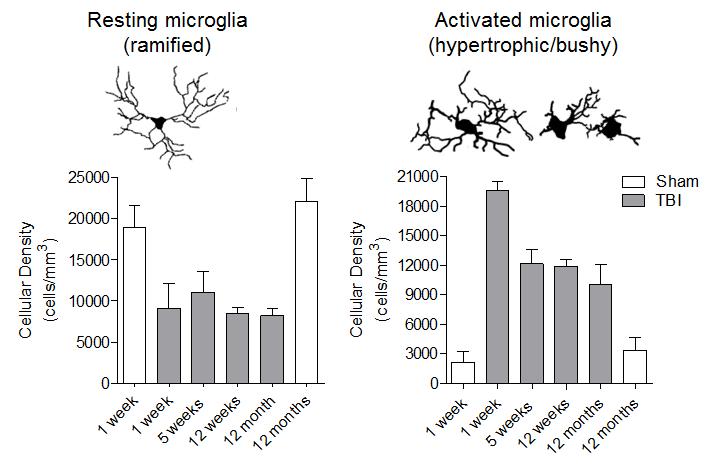