Autophagy, a catabolic process mediating the turnover of bulk cytoplasmic constituents including organelles and protein aggregates in a lysosome-dependent manner, protects organisms from a variety of diseases, including neurodegeneration, cancer and aging. Up-regulation of autophagy has been observed following traumatic brain injury (TBI), but its function in this context remains unknown. We use in vivo and in vitro models to examine the role of autophagy after traumatic injury, and to delineate the molecular mechanisms involved. Our long-term goal is to define novel druggable target molecules and pathways for the effective modulation of autophagy in TBI and other neurodegenerative diseases.

Autophagy is a cellular catabolic response originally developed in unicellular eukaryotes such as yeast to allow survival during the conditions of low nutrition. During autophagy a double isolation membrane engulfs cytoplasmic material including proteins, protein aggregates and organelles such as mitochondria, ribosomes and fragments of the ER. The membrane forms a vesicle termed autophagosome, which eventually fuses with the lysosome to form autolysosome. After fusion the inner membrane is lysed and autophagic cargo is digested by the lysosomal proteases. This frees up amino acids, lipids and nucleic acids which can be recycled as building blocks for new synthesis or used to provide energy to support cellular function.

Our data indicate that autophagy is up-regulated in the ipsilateral cortex within hours after TBI in a mouse controlled cortical impact (CCI) model. It’s levels remain elevated for at least 1 week after injury. 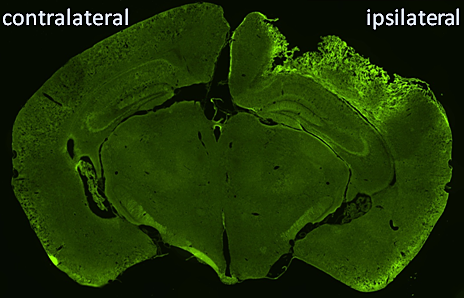 In GFP-LC3 mice we observe up-regulation of autophagy in neurons in the ipsilateral hippocampus after CCI injury. Neuronal cells are marked with NeuN.