Validation of candidate disease gene and its variant for Nephrotic Syndrome in flies: CD2AP

Female patient, part of an Italian idiopathic nephrotic syndrome cohort (Gigante et al, 2009), was described to have presented overt proteinuria with nephrotic syndrome and focal segmental glomerulosclerosis (FSGS). Age at onset 23 years. A high degree of steroid resistance was reported, however definitive data on progression to end-stage renal disease (ESRD) was not available. Variants in known FSGS-associated genes were found to be absent. Male patient, from a cohort for childhood nephrotic syndrome (CNS) of Saudi Arabian families (Al-Hamed et al, 2013), showed renal disease with age at onset three months. Disease was described as characterized by heavy proteinuria, hypoalbuminemia, edema and hyperlipidemia.

The Italian cohort was screened for mutations in CD2AP using a combination of PCR, denaturing high-performance liquid chromatography (DHPLC) and sequencing (Gigante et al, 2009). A heterozygous p.K301M variant was identified in the female patient. The authors were unable to obtain data for her parents; however, they did report the same variant was present in the patient’s 6-year-old child who was described as phenotypically normal. The CD2AP coding variant was not found present in 200 healthy controls tested. They further showed that the variant resulted in defective CD2-CD2AP interaction and clustering.

Through direct sequencing of all coding exons and exon-intron boundaries of several genes previously implicated in nephrotic syndrome, three patients with the K301M variant in CD2AP as a heterozygous allele were identified in the Saudi Arabian cohort (Al-Hamed et al, 2013). One of whom also had a homozygous Q1020X mutation in PLCE1. However, they found CD2AP variants in 2.79% of their phenotypic normal control cohort as well, indicating it might be a polymorphism. The authors suggest that CD2AP variants when present in a heterozygous context, might increase susceptibility to developing nephrotic syndrome but not be outright pathogenic.

Drosophila nephrocytes and human podocytes (kidney cells) share striking similarities, and by systematically studying 40 genes associated with nephrotic syndrome, including 7 that had not previously been analyzed for renal function in an animal model, we showed found that 85% of these genes are required for nephrocyte functions. This suggests that a majority of human genes associated with nephrotic syndrome play roles in renal function that are conserved from flies to humans. To investigate the potential of this functional conservation further, we focused on Cindr, the fly homolog of human CD2AP. Silencing Cindr specifically in nephrocytes led to dramatic nephrocyte functional impairment and shortened life span, as well as collapse of nephrocyte lacunar channels and effacement of nephrocyte slit diaphragms, each of these structures is essential to nephrocyte function (Figure 1). These phenotypes could be rescued by expression of a reference human CD2AP gene, but not by the disease-variant allele (CD2AP-K301M) derived from the patients with CD2AP-associated nephrotic syndrome (Figure 1). CD2AP has been reported to function as a linker protein associated with the podocyte slit diaphragm where it has been shown to interact with both nephrin and podocin. We used genetics to show that in nephrocytes, Cindr interacts with Mec2, the Drosophila gene encoding the podocin homolog (Figure 1, F and G). This result confirms the similarities in organization of slit diaphragm components at the molecular level in nephrocytes and podocytes, and extends earlier studies conducted in garland nephrocytes during Drosophila embryonic development. Together these data provide evidence to support a more direct causative role for CD2AP variants in developing nephrotic syndrome. Further, we conclude that the Drosophila nephrocyte can be used to elucidate clinically relevant molecular mechanisms underlying the pathogenesis of most monogenic forms of NS, and to efficiently generate personalized in vivo models of genetic renal diseases bearing patient-specific mutations. 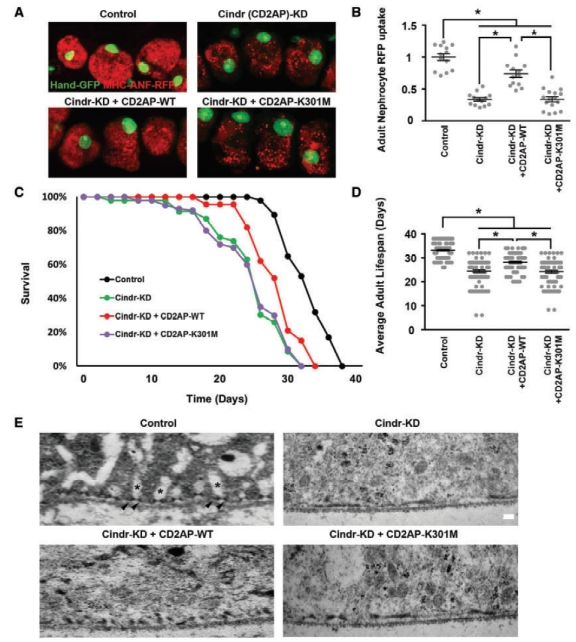