Zebrafish with a mutation (grlm145) in the “gridlock” gene lack trunk and tail circulation because of an aortic dysmorphogenesis that resembles congenital aortic coarctation in humans (Figure 1A). Beyond gridlock, other genetic and biochemical factors are likely involved in artery versus vein (A/V) specification, but identifying additional factors via traditional genetic approaches may be difficult, particularly if such factors are necessary for vital biological processes that occur prior to the formation of the vasculature. For the identification of novel factors that govern the artery/vein cell fate decision, it is important to employ a strategy that enables control over the dose and timing of gene inactivation. Therefore, instead of traditional genetic approaches, we employed small-molecule screening to identify conditional modifiers of the artery/vein cell fate decision. We identified that a small molecular compound, GS4898, is capable of suppressing the congenital aortic coarctation-like phenotype in the 1–5 mM range (Figure 1D). In addition, we show that activation of ERK (p42/44 MAP kinase) is a specific marker of early arterial progenitors and is among the earliest known determinants of the arterial specification. In embryos, cells fated to contribute to arteries express high levels of activated ERK, whereas cells fated to contribute to veins do not. Inhibiting the phosphatidylinositol-3 kinase (PI3K) branch with GS4898 or known PI3K inhibitors, or by expression of a dominant-negative form of AKT promotes arterial specification. 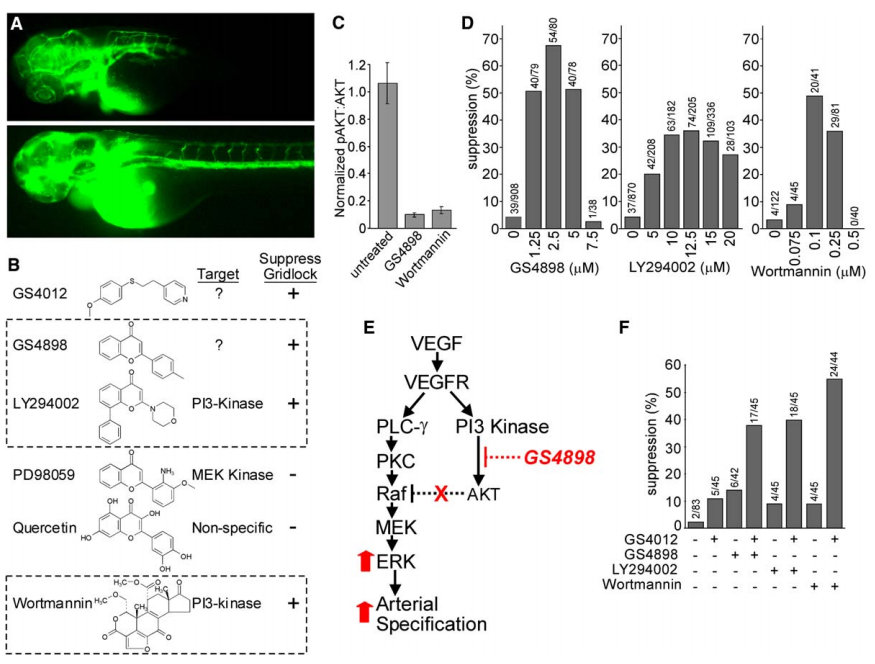 Figure 1. Suppression of the gridlock Phenotype by the Novel Flavone GS4898 Involves PI-3 Kinase Inhibition(A) Suppression of the gridlock phenotype (atresia of the proximal aorta in grlm145 mutants) by GS4898 [2-(4-methylphenyl)-4H-chromen-4-one]. Above, amicroangiogram of an untreated 60 hpf grlm145 mutant, in which arterial circulation to the tail is disrupted, is shown. Below, amicroangiogram shows the restoration of tail circulation in a grlm145 mutant by GS4898 treatment. (B) The gridlock phenotype is suppressed by GS4012, GS4898, LY294002, and wortmannin, but not PD98059 and quercetin. GS4898 and the PI3K inhibitors are enclosed in dashed boxes (C) Quantitative western analysis of activating AKT phosphorylation (at Ser472) in 20-somite-stage (ss) zebrafish embryos shows dramatic reduction in AKT phosphorylation by GS4898 (25 μM) or wortmannin (0.5 μM) treatment, starting at 10 hpf. Results were normalized from three independent experiments and achieved significance at p < 0.004 for each condition versus untreated. Error bars represent standard error. (D) Dose response for GS4898, LY294002, and wortmannin. Compounds were added at 12 hpf and washed out at 27 hpf. Suppression (%) represents percentage of treated embryos that have tail circulation at 48 hpf. Number on top of each bar represents actual number of embryos with normal tail flow over the total number treated. (E) Model for two VEGF-receptor-dependent signaling branches with opposing effects on arterial specification. The PLC-γ/ERK branch mediates arterial cell specification, whereas the PI3K branch exerts a negative effect on the PLC-γ/ERK branch, possibly via direct inhibition of Raf by Akt. By blocking PI3K, GS4898 lifts PI3K’s inhibition of the PLC-γ/ERK pathway, leading to increased ERK activation and arterial specification. (F) Synergy between GS4898 or PI3K inhibitors and GS4012. Single treatment involving a subeffective dose of GS4898 (0.75 μM), LY294002 (3 μM), wortmannin (0.075 μM), or GS4012 (0.7 μg/mL) does not suppress the gridlock phenotype, but cotreatment with GS4012 and GS4898, LY294002, or wortmannin at the same doses leads to significant suppression of the gridlock phenotype.