University of Maryland School of Medicine Physician-Scientist Is Lead Author on NIH Study of More Than 1,000 Men

Targeted biopsy using new fusion technology that combines magnetic resonance imaging (MRI) with ultrasound is more effective than standard biopsy in detecting high-risk prostate cancer, according to a large-scale study published today in JAMA. More than 1,000 men participated in the research at the National Institutes of Health (NIH) over a seven-year period.

Researchers found that 30 percent more high-risk prostate cancers were diagnosed with targeted fusion-guided biopsy than with standard biopsy. In addition, 17 percent fewer low-risk cancers were diagnosed with the new approach, compared to the older method. In a targeted biopsy, MRIs of the suspected cancer are fused with real-time ultrasound images, creating a map of the prostate that enables doctors to pinpoint and test suspicious areas. In a standard biopsy, doctors use ultrasound guidance to take multiple random tissue samples from throughout the gland. Unlike other cancers, such as breast cancer, which can be detected through mammograms, prostate cancer is not generally diagnosed using advanced imaging.

“This study demonstrates that targeted fusion-guided biopsy could significantly enhance our ability to identify patients with high-risk prostate cancers that need more aggressive treatment,” says lead author Mohummad Minhaj Siddiqui, MD, assistant professor of surgery at the University of Maryland School of Medicine and director of urologic robotic surgery at the University of Maryland Marlene and Stewart Greenebaum Cancer Center. Dr. Siddiqui was a fellow at NIH when the study was conducted.

“With fusion technology, we now have a tool to help us differentiate high-risk cancers from low-risk ones that may require minimal or no treatment,” Dr. Siddiqui says. “There is a concern that we over-diagnose and over-treat low-risk cancers that are unlikely to be terminal, and this technology enables us to make a more reliable diagnosis than the current standard practice.”

But he adds, “While these findings could translate into substantial benefit to patients, this study is preliminary with regard to clinical endpoints such as recurrence of disease and prostate cancer-specific mortality.” Dr. Siddiqui says randomized clinical trials will be needed to determine the impact of targeted biopsy on clinical outcomes.

E. Albert Reece, MD, PhD, MBA, vice president for medical affairs at the University of Maryland and the John Z. and Akiko K. Bowers Distinguished Professor and dean of the University of Maryland School of Medicine, says, “This study demonstrates that the MRI/ultrasound fusion biopsy technique offers benefits when compared to the current standard of care to diagnose clinically significant prostate cancer. Although further research is needed, this method holds promise, especially for diagnosing men with high-grade, aggressive cancers that may go undetected. Dr. Siddiqui is actively pursuing new research initiatives to bring fusion-guided biopsy into the clinical setting.”

Dr. Siddiqui plans to use MRI/ultrasound fusion in a clinical trial to identify and biopsy questionable areas within the prostate. In cases where treatment can be deferred, he will use this technology to perform more reliable active surveillance of prostate cancer requiring fewer biopsies. If the disease requires treatment and isn’t widespread, he will use focal brachytherapy – implanted radioactive seeds – to irradiate only the tumor, sparing the surrounding tissue. For patients with early-stage cancer, this option avoids many of the side effects associated with removing the prostate or irradiating the entire gland. In more severe cases, the MRI can help guide more aggressive options such as robotic surgery.

Prostate cancer is highly curable, with a 94 percent 15-year relative survival rate for early stages. It is often diagnosed after blood tests show elevated prostate-specific antigen (PSA), but the PSA test has come increasingly under fire for being unreliable. Due to an inability to differentiate aggressive cancers from nonaggressive types, physicians treat the majority of cases, which may lead to side effects such as impotence and/or incontinence. Treatments include surgery to remove the prostate, radiation therapy and active surveillance during which patients are continuously monitored. Most men diagnosed with prostate cancer have a nonaggressive form of the disease, with tumors that grow very slowly – so slowly that the men may never experience any cancer-related complications and die from other causes.

The study of 1,003 men was conducted at the NIH in Bethesda, Md., from 2007-2014, with Peter A. Pinto, MD, the head of the prostate cancer section of the urologic oncology branch, serving as the senior investigator. The participants were referred for biopsy because of elevated PSA or an abnormal digital rectal exam. They received targeted and concurrent standard biopsies.

Researchers also found that targeted biopsy was better able to predict whether the disease was low- or intermediate risk than standard biopsy or the two approaches combined. They were able to make that determination by comparing biopsied tissue with tissue taken from a patient’s prostate after it was later surgically removed.

The University of Maryland School of Medicine was chartered in 1807 and is the first public medical school in the United States. It continues today as an innovative leader in accelerating innovation and discovery in medicine. The School of Medicine is the founding school of the University of Maryland and is an integral part of the 11-campus University System of Maryland. Located on the University of Maryland’s Baltimore campus, the School of Medicine works closely with the University of Maryland Medical Center to provide a research-intensive, academic and clinically based education. With 43 academic departments, centers and institutes and a faculty of more than 4,000 physicians and research scientists plus more than $400 million in extramural funding, the School is regarded as one of the leading biomedical research institutions in the U.S. with top-tier faculty and programs in cancer, brain science, surgery and transplantation, trauma and emergency medicine, vaccine development and human genomics, among other centers of excellence. The School is not only concerned with the health of the citizens of Maryland and the nation, but also has a global vision, with research and treatment facilities in more than 30 countries around the world. For more information, visit www.medschool.umaryland.edu.

About the University of Marlene and Stewart Greenebaum Cancer Center 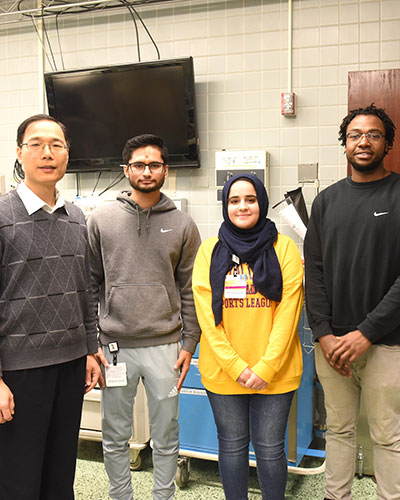