The average heart beats 35 million times a year – 2.5 billion times over a lifetime. Those beats must be precisely calibrated; even a small divergence from the metronomic rhythm can cause sudden death. For decades, scientists have wondered exactly how the heart stays so precisely on rhythm even though it contains so many moving parts.

Now, researchers at the University of Maryland School of Medicine (UM SOM) have helped identify how a particular protein plays a central role in this astonishing consistency. This is the first time the mechanism has been described; the discovery could eventually help scientists treat heart problems that kill millions of people every year.

W. Jonathan Lederer, MD, PhD, professor of physiology at the UM SOM, as well as director of the Center for Biomedical Engineering and Technology, and David Warshaw, PhD, professor of molecular physiology and biophysics at University of Vermont (UVM) and the Cardiovascular Research Institute of Vermont, describe how myosin-binding protein C (“C protein”) allows the muscle fibers in the heart to work in perfect synchrony. The results appear today in the latest issue of the journal Science Advances.

“This protein turns out to be really important to this process,” said Dr. Lederer. “This is a really exciting finding. We envision a lot of research that we can do with this new knowledge. We will continue to investigate this in all kinds of ways.”

For years, researchers have known that calcium acts as a trigger for the heartbeat, activating proteins that cause the sarcomeres – the fibrous proteins that make up heart muscle cells – to contract. Dr. Lederer found that the calcium molecules are not distributed evenly across the length of each sarcomere; the molecules are released from the ends. Despite this, the sarcomeres contract uniformly. But exactly how has remained a thorny mystery.

Drs. Lederer, Warshaw and their colleagues found the answer: C protein. This protein was known to exist in all heart muscle cells, but until now, its function was unknown. Using an animal model, the researchers studied the physiology of sarcomeres, measuring calcium release and the muscle fibers’ mechanical reaction. It turns out that C protein sensitizes certain parts of the sarcomere to calcium. As a result, the middle of the sarcomere contracts just as much as the ends, despite having much less calcium. In other words, C protein enables the sarcomeres to contract synchronously.

“Calcium is like the sparkplugs in an automobile engine and C protein acts like the rings that increase the efficiency of the movement of the pistons,” says Michael J. Previs, PhD, an assistant professor in the Department of Molecular Physiology and Biophysics at UVM.

C protein appears to play a large part in many forms of heart disease. In the most severe cases, defects in C-protein lead to extremely serious arrhythmias, which cause sudden death when the heart loses the ability to pump blood. In the U.S., arrhythmias contribute to about 300,000 deaths a year, according to the American Heart Association. (Not all arrhythmias are fatal; some can be controlled with medicines and electrical stimulation.)

Lederer and his colleagues think that it may be possible to affect arrhythmias by modifying the activity of C protein through drugs. “I think this could be very big,” says Dr. Lederer. “This protein is definitely a drug target.”

“This work by Dr. Lederer and his colleagues is a great example of collaborative basic science research with potentially huge translational implications,” said Dean E. Albert Reece, MD, PhD, MBA, who is also the vice president for Medical Affairs, University of Maryland, and the John Z. and Akiko K. Bowers Distinguished Professor and Dean of the School of Medicine. “Beyond the elegant findings of this work, there remain many challenges in unravelling how C protein mutations produce contractile and arrhythmic dysfunction in disease.”

The research was funded by the National Institutes of Health. 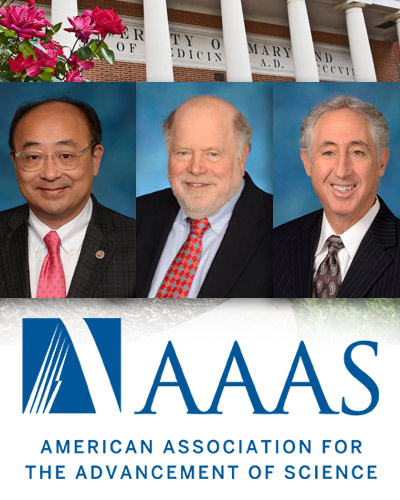 Three preeminent physician-scientists at the University of Maryland School of Medicine (UMSOM) have been named to an elite group of scientists, engineers, and innovators, as 2020 Fellows of the American Association for the Advancement of Science (AAAS). AAAS is the world’s largest multidisciplinary scientific society and a leading publisher of cutting-edge research through its Science family of journals.