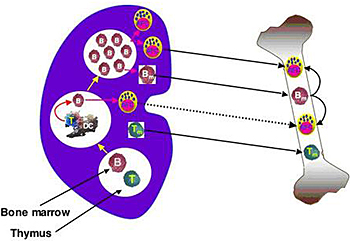 The immune system protects against infections, fights tumors, and contributes to the pathogenesis of many diseases. Consequently, immunology is a multidisciplinary area that overlaps with microbiology, oncology, and molecular and cell biology. Our faculty has research interests in several areas.

Innate immune cells (macrophages, etc) are mobilized against pathogens by signaling through specialized receptors. Our researchers have discovered that mutations in these molecules are the basis for a novel group of immune deficiencies (Vogel, Medvedevand Toshchakov), and they are developing strategies for regulation of the innate defenses. Cytokines and chemokines are produced during immune responses that regulate inflammation (Vogel,Medvedev), cellular trafficking (Kamin-Lewis), and cell activation (Keegan, Chapoval), and contribute to diverse pathological reactions in various tissues (Atamas, Moudgil). The structure, function and evolution of protein-carbohydrate interactions, including C- and F-type lectins and galectins, in innate immunity and infection in fish, invertebrates, and mammalian systems are being investigated by Dr. Vastaat the Columbus Center.

The adaptive immune system uses diverse antigen receptors on B and T cells, and our research centers on how these receptors are generated during lymphocyte ontogeny (Livak, Flajnik), how lymphocytes are activated (Williams) and programmed for subsequent cell death (Carey), and how immune responses are regulated by memory/effector T cells (Kamin-Lewis). A dysregulation of cell activation and immune regulation often leads to autoimmunity; our immunologists study the mechanisms and therapy of these diseases (Moudgil,Atamas). Several groups study the immunity to pathogenic bacteria (Barry, Blanchard, Vogel) and viruses, including the HIV with a focus on B cells and antibody (Lewis), gamma/delta T cells (Pauza) and other anti-viral mechanisms (Reid, Garzino-Demo, DeVico). Ontogeny and senescence of immune responses to vaccines are also studied (Pasetti, Sztein). Comparative studies of immunity in lower vertebrates have led to the discovery of novel immune molecules with unexpected properties that are being explored in biodefense (Ota, Flajnik). Novel immunotherapy of cancer using antibodies and T cell co-stimulation are being developed and tested (Webb,Strome, Schulze, Tamada, Mann).