‌A Career Dedicated to Eliminating Malaria: The Next Generation of Research 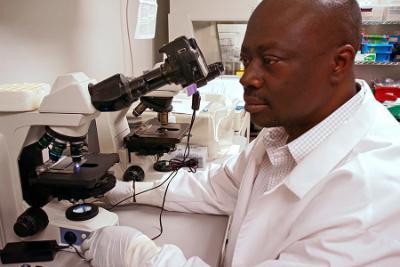 Amed Ouattara, PhD, a Research Associate in the Division of Malaria Research, has dedicated his career to eliminating malaria. It began in 1999 with his research in Mali and continued when he joined the University of Maryland Baltimore in 2005 for his PhD training in molecular epidemiology. Now he spends his time here in Baltimore and at our research site in Mali, developing new and innovative methods to create an effective malaria vaccine.

Dr. Ouattara says he decided many years ago when he was working on his doctorate in pharmacy in Mali, that malaria would be the focus of his career. For years, his work has focused on preventing and eliminating malaria, the biggest killer of children under five years of age in developing countries.

“I saw it firsthand.  I am from Burkina Faso and have been working in Mali. For me, it would be very impactful if I can at least help to develop a vaccine in the coming years to prevent this disease,” he said, adding that often times doing hospital work in Mali several young children would die every day from this terrible disease. “You would have ten kinds come in, and by the morning there would only be five who survived,” he said.

Here at the University of Maryland School of Medicine, Dr. Ouattara has developed highly innovative analytical approaches to characterize breakthrough infections during malaria vaccine trials. As a member of the DMR faculty during the past two years, he has been analyzing the diversity of malaria parasites that occur in natural infections in Mali, as well as other malaria-endemic countries,  to identify the most promising malaria antigen targets that could be included in a multivalent malaria vaccine. His work focuses on using new approaches to prioritize malaria vaccine antigens candidates using a wide range of genomic methods, assessing the strain-specific efficacy of malaria vaccines, and surveillance of “vaccine resistant malaria.”

“This is my commitment, and this is what I will be doing until we have made a malaria vaccine,” Dr. Ouattara said.