At a July 29 luncheon at the Dr. Samuel D. Harris National Museum of Dentistry marking the culmination of the YouthWorks program for Baltimore students, Congressman Elijah E. Cummings, JD ’76, encouraged the youths to continue to pursue their aspirations, regardless of any obstacles they may face along the way. Read full story

Dr. Eugene Newmier moved to the small Eastern Shore city of Cambridge in 1997 because the state promised some help repaying his medical school loans. He soon was charmed by the lifestyle — and the patients. He now cares for 3,000 to 3,500 people, about the most recommended under federal guidelines and more than a quarter of the city's population. But he is loath to turn anyone away. Visit the Baltimore Sun's website for full story 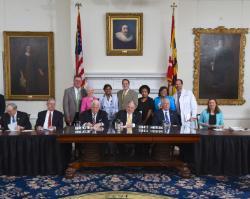 A Win for Primary Care in Maryland

Following HRSA's Bureau of Health Workforce webinar on Georgia AHEC’s Preceptor Tax Incentive Program (PTIP), Dr. Richard Colgan, Professor of Family and Community Medicine, University of Maryland School of Medicine and Director of the Maryland AHEC program, set out to replicate this legislation in Maryland. The justification for this legislation in Maryland was already well documented. According to the American Medical Association 2011 Graduate Medical Education data, Maryland ranked last of the 50 states for Graduate Medical Education graduates who were likely to go on to be generalists. Furthermore, not unlike other parts of the US, Maryland has struggled to recruit and retain health care professionals in underserved areas of the state. Therefore, the primary care workforce is impacted in Maryland and ultimately the training of medical students, nursing students, etc that relied on primary care community preceptors for their required clinical rotations.