Traumatic brain injury (TBI) induces a series of delayed secondary biochemical and cellular changes that contribute to irreversible tissue damage. Delayed secondary biochemical and cellular changes after TBI continue for months to years, and are associated with chronic neuroinflammation and progressive neurodegeneration. Increasing evidence suggests that both pathophysiological changes and neurological recovery after injuries to the central nervous system can be modulated by physical exercise. The mechanisms involved may include up-regulation of neurotrophic factors leading to enhanced neuronal plasticity as well as anti-apoptotic and anti-inflammatory effects. Interestingly, an important variable appears to be the timing of initiation of exercise as a function of injury severity which can affect the neurotrophic factor response to injury. Our recent work demonstrates that late exercise initiation beginning at 5 weeks after experimental trauma, but not early initiation of exercise at 1 week, significantly reduces working and retention memory impairments at 3 months, and decreases lesion volume. The improvement in cognitive recovery is associated with attenuation of classical inflammatory pathways, activation of alternative inflammatory responses and enhancement of neurogenesis. In contrast, early initiation of exercise does not alter behavioral recovery or lesion size, and increases the neurotoxic pro-inflammatory responses. Our ongoing research underscores the critical importance of timing of exercise initiation after trauma and its relation to neuroinflammation, and challenges the widely held view that effective neuroprotection requires early intervention. 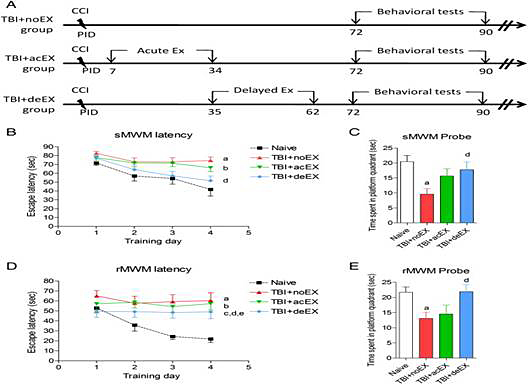