2014 State of the School Address 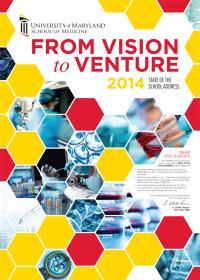 In the 20th annual State of the School address on October 22, University of Maryland School of Medicine (UM SOM) Dean E. Albert Reece emphasized the need to link basic scientific and biomedical research to practical application that are useful to patients, society and industry. The theme of the presentation was “Vision to Venture.”

The school is making “tremendous progress toward our ambitious goals,” said Reece, MD, PhD, MBA, who is vice president for medical affairs at the University of Maryland, as well as the John Z. and Akiko K. Bowers Distinguished Professor.

Speaking to a standing-room-only crowd, Dean Reece noted that grant funding had bounced back from decreases linked to sequestration and other causes. For Fiscal Year 2014, the school was awarded $400 million in grants, an eight percent increase from $370 million in FY 2013.

“I am very excited to tell you that we have rebounded,” said Dean Reece, noting that the school grant funding was ranked eighth in the country among all public medical schools.

Dr. Reece emphasized the school’s continued focus on working on “Big Science” problems – those that require broad collaboration across disciplines. He pointed to the school’s Brain Science Consortium Unit, which seeks to understand complex issues relating to the brain, such as neuroinflammatory diseases.

Dr. Reece also pointed to the vibrant UM SOM clinical practices, which grew more than five percent between 2008 and 2014.

2018: From Groundbreaking Achievements to Record-Breaking Milestones

2017: Transforming the Trajectory of Medicine: A Review of the Centuries

2015: Undaunted in Purpose, Resilient in Execution

2010: Working Together, Bringing Out the Best